Frankfurt is an imperial German city on the River Main, hence its full name: Frankfurt am Main. It’s an important economic and commercial center and it also has an impressive skyline that reminds many tourists of New York City or Chicago.

Frankfurt is also an important cultural hub and it’s famous because of its exceptional museums covering art, science, and history.

Frankfurt is lovely to explore on foot – it’s a city that should be included in any German travel bucket list.

Frankfurt is a charming and buzzing city that strikes the right balance between traditional half-timbered houses and impressive modern skyscrapers.

It makes a great destination for anyone visiting Germany and it should be included in any road trip across this country.

It’s not difficult at all to rent a car in Germany and driving there is not a problem either as long as you familiarize yourself with the road signs and stick to the speed limits.

German roads are safe but you can also invest in an insurance policy for your rental to enjoy an even safer driving experience. 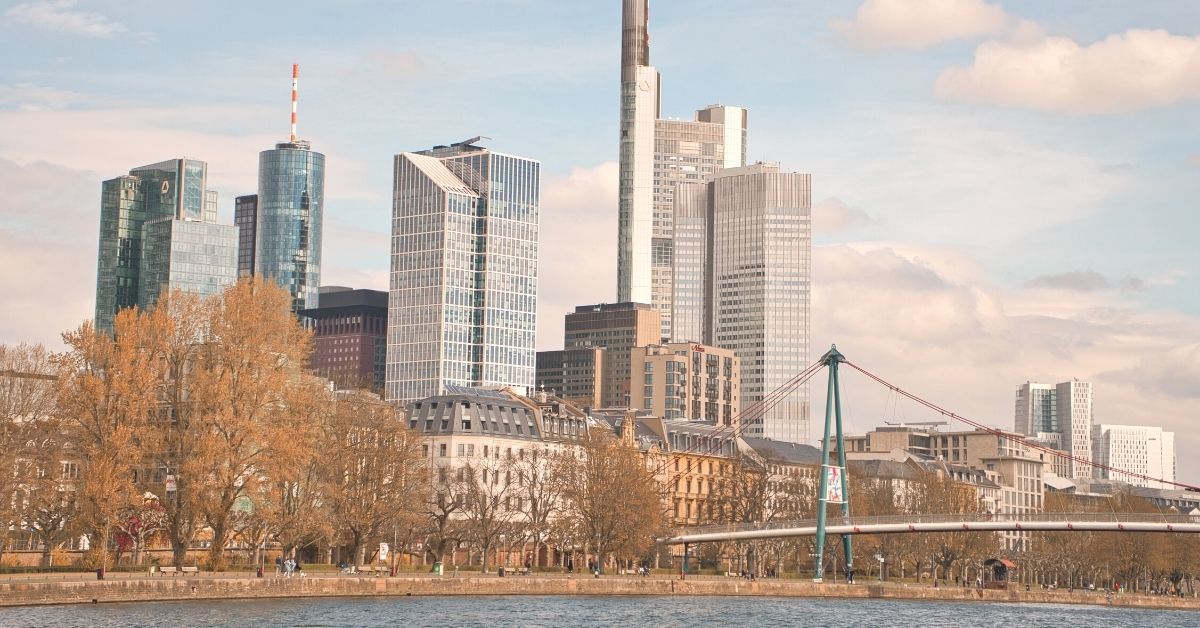 Are you interested in visiting this city? Go on reading to discover its most beautiful attractions!

Located in Frankfurt’s Altstadt or Old Town, the Römemberg is an irregularly shaped square with the Justice Fountain placed at its center.

It’s the most picturesque public square in the city, the busiest pedestrian zone, and home to several tourist attractions including the famous Christmas Market that is organized every year.

The Römer, a medieval building, is one of the most remarkable and unique structures on the square. It has been the City Hall since the early 1400s.

The pinkish facade facing the square has three roof peaks, each with a stepped gable. It’s possible to visit the City Hall and admire the impressive Imperial Hall.

Take your time to look around and admire the many picturesque buildings around the square, many of them have half-timbered facades! Another remarkable building is the small, gothic  St. Nicholas Church.

The historic Wertheim House, the only one that survived the 1944 air raids that destroyed much of old Frankfurt, can also still be seen.

The Römerberg is a must-see for anyone spending some time in Frankfurt. It’s a trip back in time with some of the most beautiful Instagrammable backdrops for your pictures.

Besides, with plenty of cafés and restaurants around, it’s a great place to sit down and relax, enjoy the charming atmosphere and a delicious bite!

Remember that the Altstadt was severely damaged during the air raids of the IIWW and most of it had to be rebuilt.

The restoration project took years and included the reconstruction of fifteen historic houses and the rebuilding of 20 new ones in the traditional half-timbered style.

Built of red sandstone in Gothic style between the XIII and XV centuries, with its 95-meter-tall tower, the Frankfurt Cathedral still stands out in this city of skyscrapers.

Its full name is St Bartholomew’s Cathedral and it’s one of only a handful of churches in the country to be designated as an Imperial Cathedral. It was here from 1562 to 1792 when the coronation of Emperors took place in the Election Chapel.

Beneath the tower, visitors can appreciate the magnificent Crucifixion by Hans Backoffen and the Maria-Schlaf-Altar in the Marienkapelle. Various carved side altars will call your attention.

The Cathedral’s most important relic is the skullcap of St Bartholomew, which is kept in the Late Romanesque Bartholomew’s Choir.

Frankfurt Cathedral stands out as one of the most stunning structures in the city and it’s another must-see attraction.

Just outside the building, there’s the Archaeological Garden where you can see the foundations of a Roman settlement and a Carolingian royal palace.

If you’d like to see panoramic views of the city and you’re visiting the city between April and October, challenge yourself to climb the almost 325 steps of the giant spiral staircase of the Cathedral’s tower and enjoy!

Johann Wolfgang von Goethe, the country’s greatest writer, was born in Frankfurt and it’s now possible to see the house where he lived between 1749 and 1765.

Visitors can get a glimpse of what his life was like at the time. You can see the sumptuously decorated dining room on the main floor, his writing room on the top floor where he created his early writings, or even played with his puppets when he was a little boy.

It was built in bourgeois style and it’s decorated with period furniture and paintings. It’s one of Frankfurt’s most remarkable historical attractions.

Despite the original half-timbered house being damaged during the IIWW, it was rebuilt in 1949.

During special exhibitions, the visitors can see valuable and sensitive documents and prints from the collection, the manuscript archive, and the library. The house spans four floors and there’s plenty to explore.

The Goethe Museum can be found next door. It’s a 14-room gallery that showcases artworks from the writer’s time, including masterpieces of the Late Baroque and Romantic periods.

Both Goethe House and Museum are must-see attractions in Frankfurt, especially if you are a literature lover and you’ve read any of Goethe’s works recently before your visit. 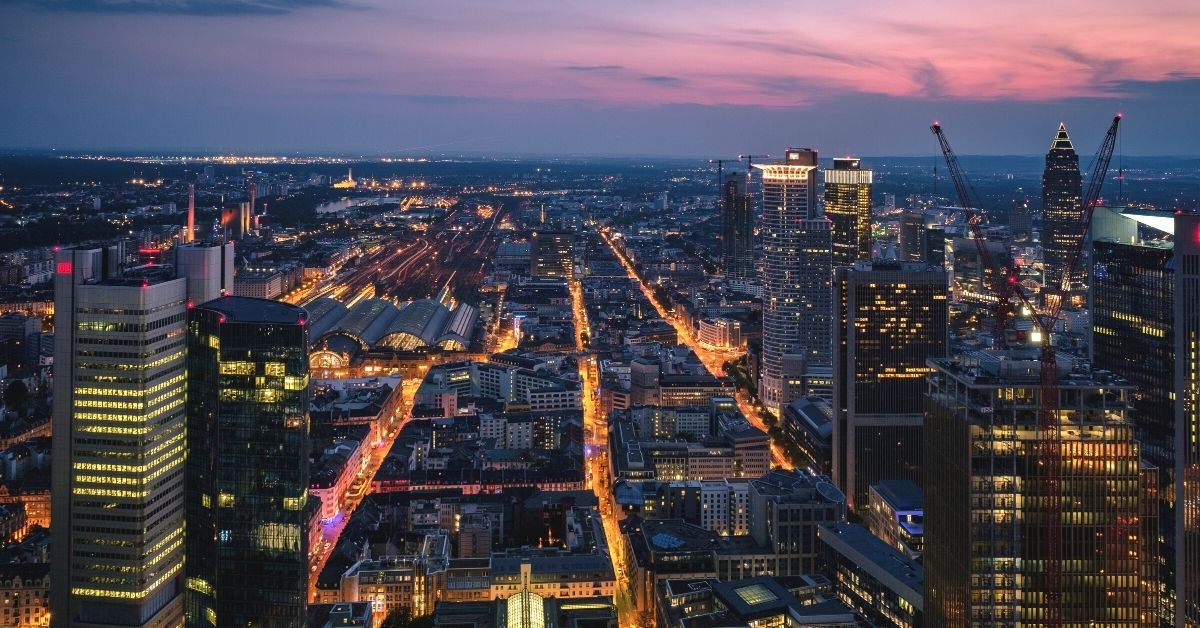 Museumsufer is Frankfurt’s Museum District and it’s located on the south and north banks of the River Main. It’s a first-rate collection of about 16 separate museums, many of which are of international standing.

Amongst them, we can mention the Städel Art Museum or the excellent Museum of World Cultures, one of Europe’s most important ethnological museums.

Exploring the Museumsurfer provides visitors with a fantastic opportunity to discover the city’s interesting and rich cultural background.

Be sure to get yourself a Frankfurt card! It gives you a discount on museums and other attractions and for public transportation as well.

On Sundays, you can also wander through a morning flea market that is also established in the area.

Admire Artwork At The Städel Museum

The Städel Museum is another must-see attraction in Frankfurt because of its excellent collection of paintings from the XIV to the XX centuries.

The stunning collection includes paintings by Vermeer, Rembrandt, Goya, Monet, Picasso, Beckman or Degas, Cezanne, Pollock, Ernst or Bacon, and many others.

The Städel is one of the oldest museums in Germany and the most important art museum in the city.

There are over 2700 paintings and 100 thousand drawings and prints, making it one of the most exclusive museums in the country.

It also includes an impressive library that is home to more than 400 periodicals and 100 thousand books so it’s a place to go if you love paintings and books!

It’s one of the best museums in Europe. Opened in 1815, its unrivaled collection spans 700 years and boasts paintings, sculptures, and books and it even survived the Nazi looting.

There are two cafés within the museum as well as an outstanding shop stocking art books, prints, and gifts.

If you’re visiting Frankfurt with children, you can’t miss spending some time at the Senckenberg Natural History Museum.

Located in the Senckenberg Gardens, it’s one of the most modern museums of natural history in Europe and the second-largest of its kind in Germany.

There are several exhibitions dedicated to our planet’s biodiversity and the evolution of organisms. It is also home to Europe’s biggest exhibition of large dinosaurs.

There’s also an impressive collection of 90,000 stuffed birds along with an extensive exhibit on the development of mankind.

If you have ever wanted to see a huge dinosaur or a mammoth or a tiny pterosaur, it’s the place to go!

Climb Up The Main Tower

No visit to Frankfurt would be complete without climbing up the Main Tower.

Located in Frankfurt’s business hub, the Main Tower is an attraction in itself since it is the first fully glazed tower in Europe.

It houses a splendid restaurant 187 meters up that offers a wonderful dining experience while you admire breathtaking views of the city down below. There are also various art exhibitions offered there!

Named after the river Main, it’s the fourth tallest building in Frankfurt and the only tower this tall with public access in it.

The view from the viewing platform is mesmerizing as it gives a panoramic view of the entire city with the beautiful river flowing through it.

If the weather allows, the Taunus mountain range northwards and the Odenwald Mountains southwards can be seen. An elevator will take you up to the 650-feet high stage. 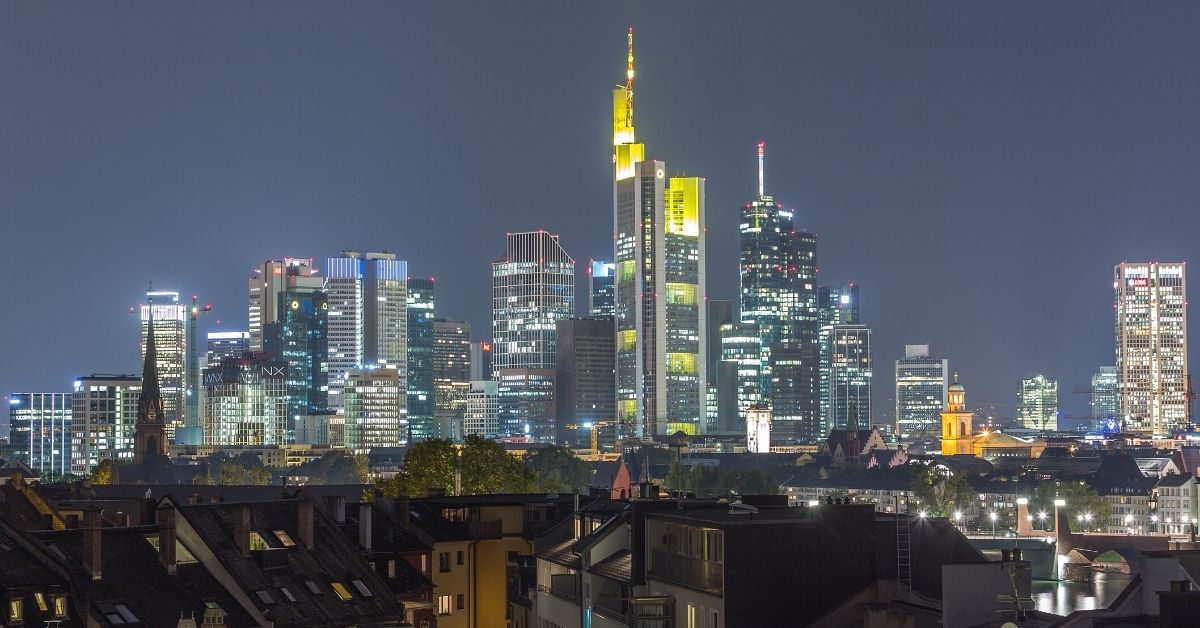 Chill At The Hauptwache

Located in the middle of the city and one of Frankfurt’s busiest pedestrian areas, the Hauptwache is famous for its mix of fine historic buildings and modern structures.

The most notable building here is the old Baroque Guard House after which the square is named. The square is on the city’s main shopping areas.

The Hauptwache is one of the most famous plazas of Frankfurt and it’s a historic area in the middle of the city.

It was once Frankfurt’s main guard, housing the city’s militia, barracks, and soon after, prison and police station, but today it is a dining establishment. The square itself is one of Frankfurt’s main shopping ranges.

The Eiserner Steg is the only pedestrian bridge across the River Main. It’s a 150-meter long iron bridge that connects the city center with the suburbs of Sachsenhausen.

Despite other bridges being spanning over the Main, the Eiserner steg is particularly famous. This is because couples traditionally lock padlocks on the bridge and this is why it is nicknamed “The Bridge of Love Locks”.

It’s quite a romantic place and it also offers one of the best opportunities to admire the Frankfurt skyline, Romerberg square, Saint Paul’s Church, and Frankfurt’s Cathedral.

Frankfurt is a city that you can not miss on your visit to Germany. Come be culturally immersed in both of Frankfurt’s modern and traditional aspects. Experience intriguing art, science, and history, while also taking in the impressive views!