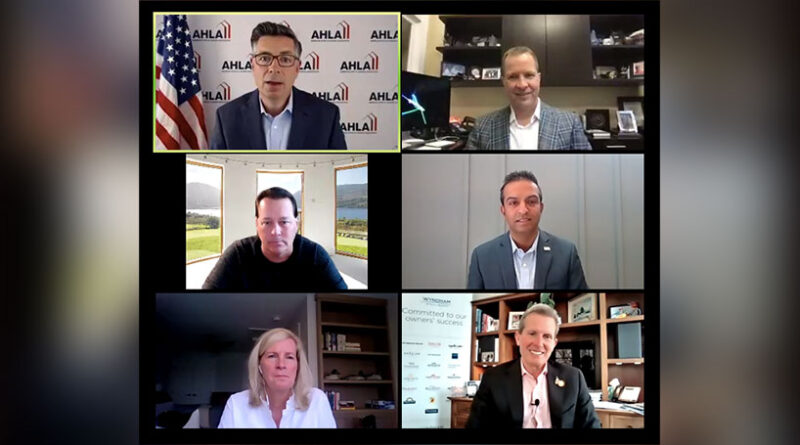 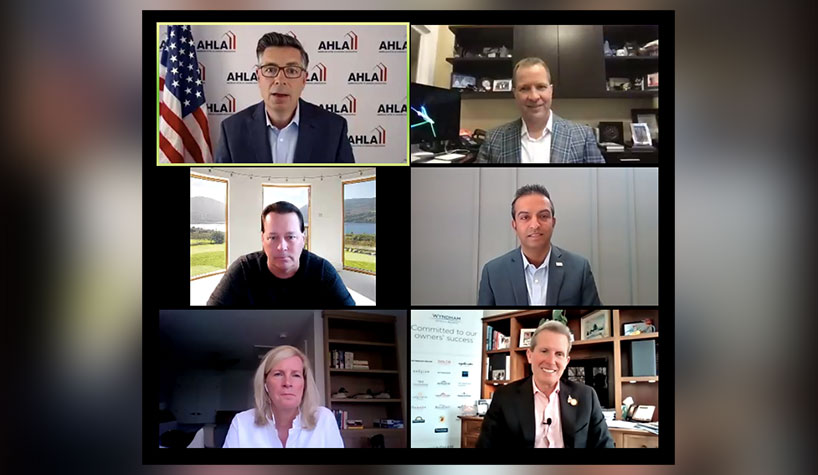 NATIONAL REPORT—During the “A View From the Top” webinar presented by The Lodging Conference and HVS, hospitality leaders shared their thoughts about recovery in the new year.

Ballotti kicked things off with his optimistic outlook for 2020. “The longest-running upcycle has just ended, so many in our industry are predicting a record comeback in terms of first leisure-transient in the second half of this year and I think we’re already seeing that,” he said. “To see economy occupancy already ahead of last year is something that certainly excites me.”

Others agreed but called for further relief. “I’m very bullish about 2021,” McCrory said. “I’m very hopeful it’s going to come in the way everyone is predicting it will. What scares me the most, what worries me and keeps me awake at night would be that it doesn’t. We need some relief. The market coming back and things settling down it just worries me that it won’t happen as quickly as we need it to. But I actually do believe we’re in a good place to move forward.”

Johnson, however, feels a full recovery won’t happen as soon as this year. “I’m always the glass overflowing guy but I’m a little more bearish on 2021 than many of my colleagues are,” he said. “I don’t think healthy people are going to get the vaccine until late summer, early fall and I for one believe that there’s going to be a waiting, quiet time. People are going to want to see infection rates go down, they’re going to want to see mortality rate decline and think, ‘Is it OK to put my toe in the water?’ I’m going to say 2021 is going to be a little bit more of a transition year.”

What scares Johnson, much like McCrory, is that the industry needs Congress to pass a release of liability quickly. “Top 100 corporations are saying ‘we’re not going to say this publicly, but we will not put our people back on the road until we get that release of liability,’” he said.

The other panelists discussed this strong correlation between legislation being passed and business travel returning.

“We need the vaccine and some protection for employers so we can really free up demand and get back to occupancy levels,” Knight said.

Patel certainly has his owners in mind, owners that have worked years to get up to the numbers they once held.

“One of the biggest concerns that I have for our hotel owners is the ADR,” he said. “Depending what industry segment you’re in, what type of hotels you own, we’ve taken a hit to maybe about 15 years where ADR has gotten back.”

Not only does corporate travel need to return, Patel said, there are also other considerations like how the vaccine will be distributed and if there will there be delays that impede economic recovery.

“We just don’t know yet,” Patel said. But, despite this uncertainty, he has seen some bright spots in the past year.

“I think this pandemic has made everyone step their game up and make their operations a little bit leaner,” he said, noting that a lot of owners have actually continued development during this time when occupancy has been low, in the hopes that these hotels will be built once the industry returns to steady numbers.

“I’ve heard from some members that this has been a good time to even start building projects because from contractors they’re getting 17-20% reduction and when we come out of this pandemic, they’re afraid that the cost of building will go up to what it was pre-COVID,” Patel said, but he added that most of the owners are just sitting back and trying to stay afloat with the assets they have.

“At this point, there’s very little differentiation, everyone is suffering and as a result, the banks are in a position where they’re needing to accommodate and provide owners with additional time,” Knight said. “Until business comes back there will be issues for people. Government help that’s come so far has failed to recognize the connection between the health of ownership and management companies and the health of their employees. There’s been a reluctance to recognize and provide ownership groups with the help specifically that they need, specifically their help enables the continual employment of these employees.”

Rogers agreed, saying that not only government relief but liability protection is essential now; a key point to remind policymakers at every level that there really is no separation between ownership, management and employees.

“If that business collapses, those employees don’t have a job,” he said. “We are linked like we’ve never been linked before. It is so critical not just to protect the business owner from what I like to term as a ‘shakedown,’ but to encourage business travel which is necessary to get back to where we were.”

Rogers went on to give an update from Washington, explaining that 13 states already passed it with another number to pass it early this year—Florida and Texas.

“With the two Georgia elections being won by the Democrats and the Democrats now controlling the U.S. Senate, the likelihood—because keep in mind this was Senator McConnell’s number one issue—that Congress is going to pass liability protection was reduced significantly after the Georgia election. That’s not a political statement that’s just a policy fact,” he said, adding that AHLA continues to push it at the federal and state level.

“What we don’t want is a patchwork of different states where you got protection here but you don’t have protection there because then you as a business owner trying to determine where people are going to travel, you don’t want to have to make that decision based on them going to a state that doesn’t have protection. We need a 50-state answer to this. It’s so important for all of us to unify around this point.”

Patel is hopeful that the industry will be able to keep open communication with the new administration.

Going forward, leaders agreed that unity, above all, is essential for 2021.

“I can’t imagine a year worse than 2020,” Rogers said, explaining that 2021 has the potential to be a good year if the industry can get through the first few months together.

“If we can look at best practices, not just in our own industry and individual hotels but best practices as far as public policy is concerned and set aside whether that’s coming from a red state or a blue state or a red politician or a blue politician, and really just look at what works and what doesn’t, then I think we’re going to get out of this a lot quicker than we think and we won’t have to wait until 2024 to be back to normal,” he said. “But if the infighting continues and if we’re stuck here in DC worrying about impeachments and whose PAC is giving money to whom and nonsense that is of total irrelevance to the average American, then this is going to go on for a while.”