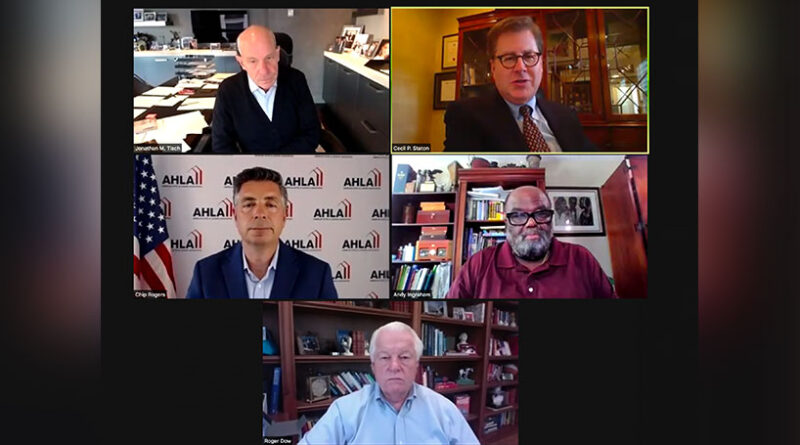 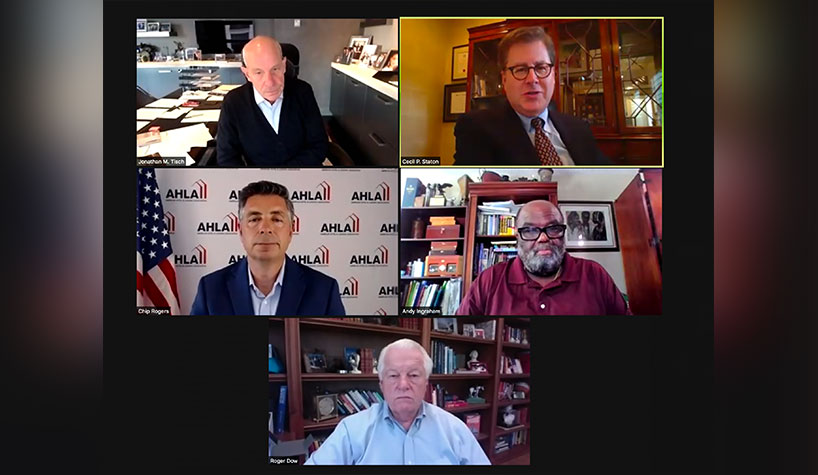 Moderated by Jonathan M. Tisch, chairman/CEO, Loews Hotels & Co./Co-Chairman of the Board of Loews Corporation, panelists weighed in on “Policy Matters: What Lodging Needs to Know Now About Public Policy.”

All of the leaders agreed that in order for the industry to survive, there will need to be bipartisan support for an additional stimulus, something that up until this point has been put off because of the election.

“Leading up to this, what we kept hearing from all of these folks—and it was frustrating for all of us—is ‘Well, we could do that, but we’ve got an election coming up…The election this, the election that,’ that was always the excuse—well, that excuse is gone,” Rogers said. “Congress now has the opportunity to do what they should have done from the beginning, which is coming together on something that is non-partisan that is absolutely necessary.”

As for hospitality leaders, Staton advised that they remain engaged in advocacy every step of the way to help Congress reach another agreement.

“We’re telling the story that America’s hoteliers face an unprecedented liquidity crisis, and there are things that could be done advocating for a second round of PPP,” Staton said. “If you review this election as it stands today, we could almost say that this election stands as a message of moderation to policy makers.”

Staton explained that this means despite the presidency going to a Democrat, Senate seats remain largely GOP despite historic spending by candidates, parties and outside groups and overall, things remain unchanged at the state level.

“I’m hopeful as a former lawmaker that maybe this is a message of moderation and that will give us an opportunity to see people come together to do what’s right,” Staton said.

Ingraham remains hopeful as well, as NABHOOD continues speaking with state legislators and local commissioners in terms of what they can do to help hotel workers as well as owners.

“I think many times when we look across the spectrum and we say hotel owners need help, people kind of look at you with a shaded eye,” Ingraham said. “I always remind them with no employer there’s no employee.”

Ingraham noted people in Washington and other elected officials have the power to make this industry-wide devastation very personal.

Rogers said that at least by the end of the year, he hopes to get Senate Majority Leader Mitch McConnell and Speaker Nancy Pelosi together to pass another PPP for President Trump to sign. He also advocated for a larger deal under President-Elect Joe Biden’s administration.

Dow agreed, pushing for the government to understand that although travel is a business of big names, it’s really the business of the American people.

“I need [elected officials]to understand if they can bring back travel, everything else follows,” Dow said. “Travel is the front door to economic development. Many people don’t understand that we’re a small business. Eighty-three of all our business is small business. Right now, the Achilles heel we have is that companies all have policies saying ‘Do not travel. Do not go to a meeting.’ Until we can turn that around, we’ve got a problem.”

“I’m hoping we have our day-after 9/11 moment, when we can come together and say this is bigger than all of us and maybe it took an administration change to do that. I’m hopeful that that’s the case,” Rogers said.