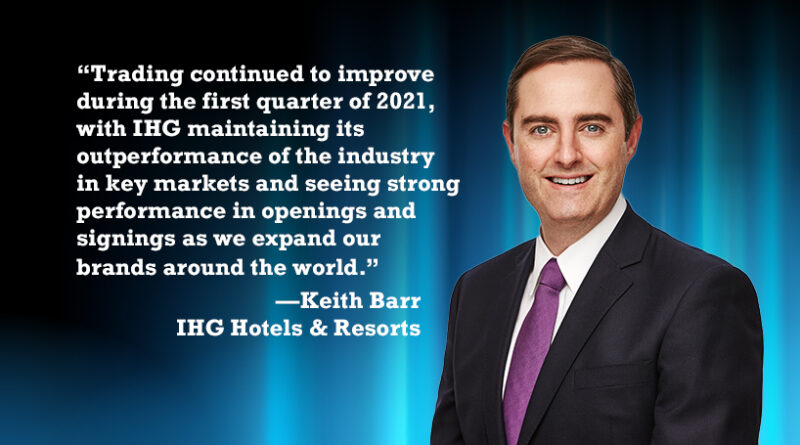 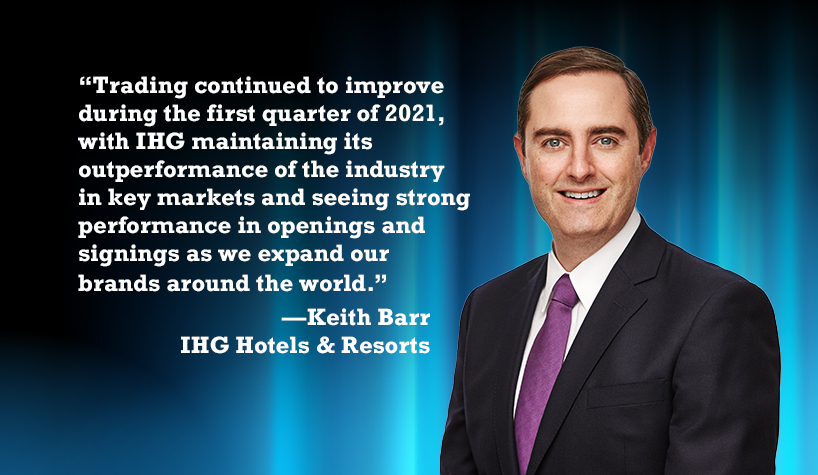 InterContinental Hotels Group (IHG) reported a decrease in RevPAR for the first quarter of 2021 but an increase in demand, led by the Americas and Greater China.

“Trading continued to improve during the first quarter of 2021, with IHG maintaining its outperformance of the industry in key markets and seeing strong performance in openings and signings as we expand our brands around the world,” said Keith Barr, CEO, IHG Hotels & Resorts. “There was a notable pick-up in demand in March, particularly in the U.S. and China, which continued into April. While the risk of volatility remains for the balance of the year, there is clear evidence from forward bookings data of further improvement as we look to the months ahead.”

“The improved Group RevPAR performance was led by the Americas, which strengthened to -43% versus 2019 levels compared to -50% in Q3 and Q4 2020,” said Barr. “In EMEAA, the continuation of lockdowns across much of the region meant RevPAR levels were largely unchanged from the prior two quarters. In Greater China, after temporary domestic travel restrictions were lifted, demand recovered quickly in March towards levels seen in the second half of 2020.”

He continued, “We opened a further 56 hotels during the quarter, and these new openings broadly offset hotels removed as part of our continued focus on maintaining the highest quality estate for our guests. Linked to this, we are making good progress on our review of the Holiday Inn and Crowne Plaza estates. Our pipeline grew with 92 signings in the quarter, driven by our industry-leading midscale brands and continued strong owner appetite for conversion opportunities, particularly in our Premium and Luxury & Lifestyle categories. This includes conversions to our voco brand, which has achieved over 50 signings in more than 20 countries in fewer than three years since launch.”

Americas
RevPAR was down 43% vs. 2019 (down 28.1% vs 2020). Occupancy was 46%, compared to quarters 1-4 of 2020 of 54%, 28%, 46% and 42%, respectively. U.S. RevPAR was down 40.4% vs. 2019, with performance continuing to be ahead of the industry. The company’s U.S. franchised estate, which is weighted to domestic demand in upper-midscale hotels, declined by 36% vs. 2019, whilst the U.S. managed estate, weighted to upscale and luxury hotels in urban locations, declined by 73%. There was a notable pick-up in demand in March, benefiting in particular from leisure trips around the Spring Break period. The improvement in trading continued into April, with the booking window extending on strengthening demand for the summer vacation season.

The company’s estate was 99% open at the end of March across the Americas. Of the 54 hotels still temporarily closed, there remains a greater proportion of upscale and luxury hotels, and also of those in the managed estate.

Gross system growth was 0.8% YTD, with the opening of 4,100 rooms (39 hotels); after the removal of 7,300 rooms (47 hotels), which included 4,500 Holiday Inn and Crowne Plaza rooms, net growth was -.6% YTD. The pace of signing activity has picked up sequentially over recent quarters. There were 3,700 rooms (39 hotels) added to the pipeline in the quarter, representing 21 hotels across its Essentials brands and 18 across its Suites brands.

Greater China
RevPAR was down 37.7% vs. 2019, and up 78.2% vs 2020. Occupancy was 40%, compared to quarters 1-4 of 2020 of 22%, 32%, 57% and 57%, respectively. Increases in COVID-19 cases and the reintroduction of temporary restrictions impacted RevPAR in January and February, though the recovery resumed in March with demand returning towards levels already seen in the second half of last year. As has been the case in previous quarters, in Mainland China the RevPAR decline was greatest in Tier 1 cities with a 41% decline vs. 2019, while Tier 2-4 cities, which are more weighted to domestic and leisure demand, performed better with a decline of 27%.