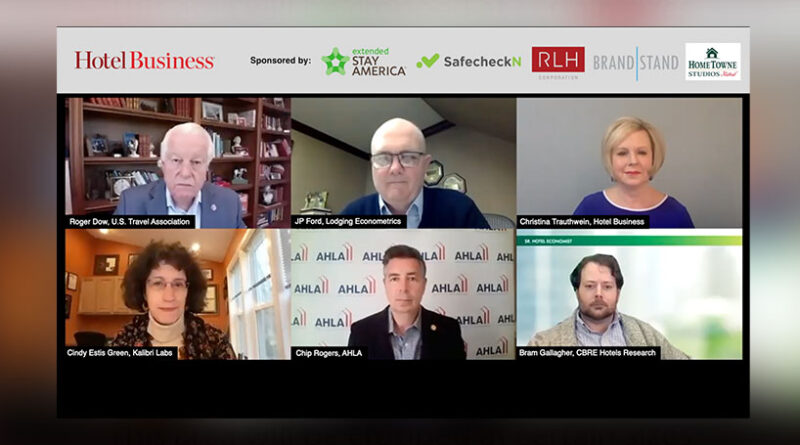 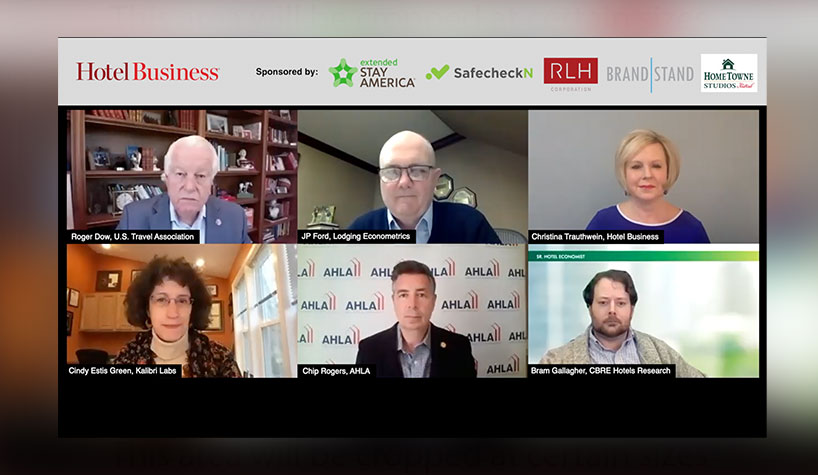 During the Hotel Business Hot Topics virtual series, “Industry Outlook 2021: Numbers & Analysis,” industry leaders gathered to give their forecast for 2021 and the years ahead. Many agreed that the first few months of this year may be some of the hardest hospitality has ever faced, but that, surely, there is a light at the end of the COVID tunnel.

“We ended the year with $500 billion less than we planned on Jan. 1 a year ago; that’s down 42%,” Dow said, opening up the session with some shocking numbers. “39% of travel industry employees are unemployed; the peak in May was 51%. To put it into perspective, the worst year of the Great Depression in 1933, there was 25% unemployment. This is 2x the Great Depression. Some people say this could be five years of coming back.”

Five years seems a bit intolerable, especially for an industry that has arguably been hit the hardest by the pandemic.

However, Rogers believes that if the industry binds together, 2023/2024 seems like a more realistic timeframe to get back to 2019 numbers.

“U.S. economists predict that GDP will be back to 2019 levels at some time mid-year this year, we’re not going to see our industry anything close to that which is why we still need significant assistance to get out of this,” he said.

Financial assistance, certainly, but also assistance from policymakers in being delicate with an industry so fragile.

“We hear a lot of folks talking about the science; well, economics is a science as well and so we not only need to follow the medical science we need to follow the economic science whenever we’re looking at policies,” Rogers explained. “So, when the CDC comes out and makes a suggestion that maybe they’re going to shut off travel to Florida or something along those lines is absurd and has real economic impact. My phone started ringing off the hook with people concerned about that. Policymakers and those in government have to think more about the power of what they say and do.”

Rogers added that the Biden administration has done a good job of centralizing a lot of the policies that go into this, but that it’s always going to be a challenge with a 50-state model.

“This is a confidence game; if people feel safe, they’ll travel,” Dow added. “The latest—that scared the dickens out of us—was the CDC saying that maybe they would want to test everybody before a domestic flight, which would be a disaster and almost impossible to do. We have to keep our voice together as an industry and really work together.”

Estis Green agreed that while masks and social distancing protocols are undoubtedly here to stay, the government has to be careful about how they institute testing requirements for travel.

“We have to be prepared for some period of time before we completely stabilize,” she said. “I think requiring testing ahead of time, if you can do it in five minutes before you get on an airplane, fine, but if people are going to have vaccination records and all kinds of restrictions, it’s going to dramatically slow the return to normalcy.”

The experts recognized that once vaccination rollout steadies, we’re sure to see a faster return, and the answer to how it can reach the masses could lie right in front of our eyes: hotels.

“We actively got engaged with vaccinations about a month ago when we reached out to the administration and all 50 governors and said let hotels be a part of the solution,” Rogers said.

The sheer quantity of hotels (50,000 in the U.S.) and their ideal locations in dense population centers could make them suitable options for vaccine distribution. Plus, their structures lend to it, especially in convention center hotels with event spaces sitting dormant. There’s also the availability of cleaning and medical staff, Rogers noted, along with the 24/7 nature of a hotel.

“It’s the perfect place to help with the rollout of the vaccine. The faster it happens, the quicker the economy can recover, and the quicker people are feeling more safe about travel,” he said.

Contractors and developers are itching to get back as well, as leaders explained that the pandemic hasn’t brought a collapse in construction like past downturns.

“’08 and ‘09 was pretty much a financial condition…This time around it’s different,” Ford explained. “We have that black swan event that many of us have been talking about for the past two, three years.”

Most, if not all, of the projects that were already under construction by the beginning of the pandemic are going to be completed on time, Gallagher added.

“Most of the effect of the pandemic has been on the postpone projects that were in the planning phase during the start of the pandemic,” he said. “The supply that was under construction is still going to be landing in 2021 so we’re going to see supply increase over this year but in 2022, when those projects would have been completed, they were in that planning phase, that’s when we’re going to see a little bit of missing supply. This could some extent help the occupancies of existing hotels in 2022 and 2023 and after that, we should start to see construction pick up again.”

“The pipeline itself is actually down only 9% by projects and 8% by rooms…it’s very healthy,” Ford said. “I’m not going to say it continues to grow, it shrinks over the past couple of quarters but very incrementally. I think what’s going to happen in the second half of 2021 and the first half of 2022, I think you may begin to see some gains in the pipeline as a lot of those projects come back onto people’s desks. People decide to move forward in anticipation for the recovery.”

Estis Green pointed out that as hotel leaders and travelers are anxious to get moving again—and because this isn’t strictly an economic crisis—the industry has to be mindful in its approach.

“This isn’t just an economic downturn and economic recovery, there’s this whole public health overlay. We first have to get past the public health crisis before we can the economic part,” she said.

The economic part—for the hospitality and travel industries—continues to lag, especially in markets that rely so heavily on business and group travel.

“The pain was not evenly distributed. The top 25 markets and upper-tier hotels that catered more to business and group travel are still waiting to come back,” Estis Green said.

Until business travel returns—especially in top markets—the industry has some dark days ahead, all experts agreed, but in bringing back this type of travel, there needs to be some ease in policies. One of the biggest challenges the industry will need to overcome, Dow said, is dealing with the caps that governors have put on capacity.

Rogers shared this sentiment and said that the public is dependent on scientists to give us the information to make proper decisions, but these scientists need not only be health experts but economic ones as well.

“It’s absolutely silly that you would come up with these blanket policies that make no sense,” Rogers said. “When you have too many of those policies, people just throw up their hands and say, ‘I’m just not going to travel, this is just too much of a hassle and I don’t know what the rules are.’ Or, they just ignore the rules which is a problem as well. Right now, the light is yellow and some people going through it and some aren’t.”

Although the industry continues to push for additional relief and stimulus, all of the experts agreed that we’re not out of the woods just yet. That will happen only when we begin to travel again.