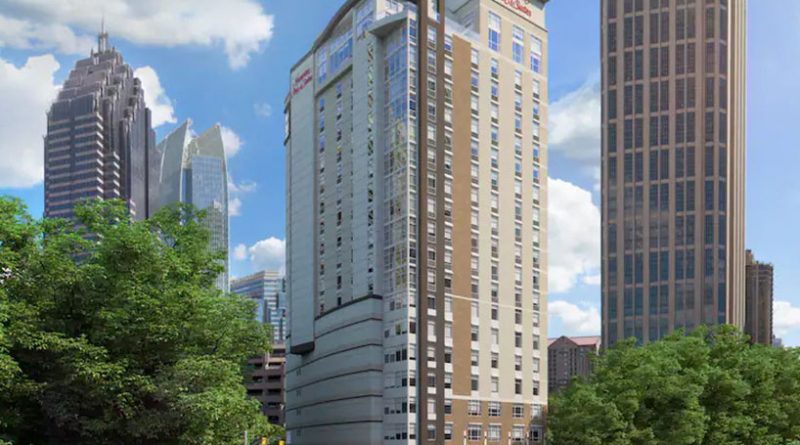 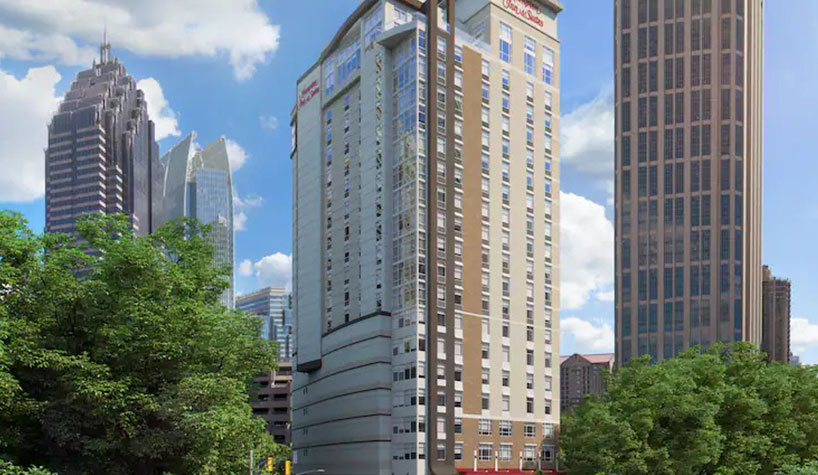 Hotels have been acquired in Atlanta, Dallas, the Seattle area and Silver Spring, MD.

RLJ acquires Atlanta Hampton Inn & Suites
RLJ Lodging Trust is under contract to acquire the fee simple interest in the 186-room Hampton Inn & Suites Atlanta Midtown for a purchase price of $58.0 million in cash. Upon stabilization, the company expects the Hotel to generate an estimated 8.0% to 8.5% NOI yield.

The hotel was constructed as a purpose-built, high-rise Hampton Inn & Suites and opened in February 2020. In addition to 186-rooms and suites, it features a sky lobby on the top floor and a rooftop bar with outdoor patio seating and views of Atlanta’s skyline. The property is located just three blocks from Google’s new office in the city.

The property is located in the heart of Midtown Atlanta, which is a top submarket with one of the strongest growth profiles, within the Atlanta metro region. Since 2015, Midtown Atlanta has seen population growth that is five times the City of Atlanta and remains poised for significant future growth with major office, residential, retail expansion and development projects underway, the company reports.

RLJ expects to close on the transaction during the third quarter, subject to customary closing conditions. With the acquisition of the Hampton Inn & Suites Atlanta Midtown, the company will own five hotels in the Atlanta market.

Originally constructed as a bank in 1965 (and operated as an office building prior to the renovation), the hotel opened in January under the Tru by Hilton flag, following a comprehensive gut renovation which included a complete modernization of both the interior and exterior of the building. Amenities include two F&B venues (including a 24/7 market); a lobby featuring foosball, billiards and other games; and a fitness center.

Napali intends to infuse more than $400,000 in capital to upgrade the rooftop deck into SkyBlue at the Tru, the newest rooftop experience in Dallas. Additionally, the company has engaged Aimbridge Hospitality to assume day-to-day operations of the property.

The AC Hotel Seattle Bellevue is DCC’s fourth acquisition this year. In January, the company acquired two San Diego/Bayside Hilton properties (the Hilton Garden Inn and the Homewood Suites by Hilton). In June, it acquired the Element Anaheim Resort Convention Center with 174 rooms.

The property is located in the center of the Arts District in Downtown Silver Spring within walking distance to shops and restaurants. The AFI Silver Theater & Cultural Center and Live Nation’s Fillmore Silver Spring concert venue are among the local attractions. Hotel features include the Mica Restaurant & Lounge offering breakfast, lunch, and dinner; a full-service Starbucks; and 15,000 sq. ft. of meeting space.

The hotel will undergo improvements of approximately $7.8 million in areas to enhance guest satisfaction and optimize room revenue and will be converted to a DoubleTree by Hilton-branded hotel. The property will be managed by Linchris Hotel Corp,