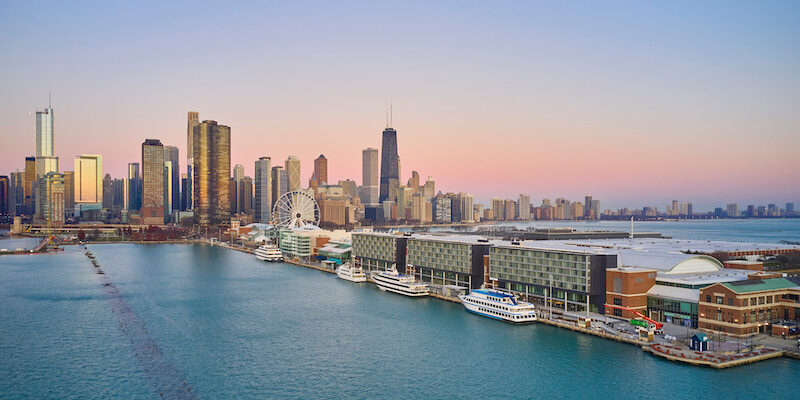 Sable at Navy Pier, which marks the 100th property milestone for Curio Collection by Hilton, has opened in Chicago. Developed and operated by Maverick Hotels & Restaurants, with an ownership group led by Acron AG, it is the first hotel to break ground on one of the city’s most iconic and historic landmarks.

Designed by locally based architecture and design firm Koo, the hotel features 223 guestrooms and suites with a nautical theme to incorporate the naval history of the city’s pier. Each room includes floor-to-ceiling windows with Lake Michigan and Chicago skyline views, along with serenity beds and living room areas.

With more than 4,300 sq. ft. of meeting and event space, the hotel was strategically designed to have three separate towers so guests looking to host an event have the option to rent an entire wing of the hotel.

“As we celebrate the 100th Curio Collection opening, we are delighted to welcome guests to Sable Navy Pier, a truly extraordinary property that sits on one of Chicago’s most iconic landmarks,” said Jenna Hackett, global brand head, Curio Collection by Hilton. “Embracing the storied heritage and culture of its locale, this new property is another example of how Curio Collection serves travelers seeking one-of-a-kind, curated experiences and continues to expand our portfolio in the world’s most sought-after destinations.”

The hotel is joined by Offshore, the world’s largest rooftop bar as recognized by the Guinness Book of World Records. The 36,000-sq.-ft. all-seasons/all-weather venue offers a full-service bar and kitchen, with a 20,000-sq.-ft. terrace, along with seven fire pits, an entertainment and gaming area and multiple gathering spaces.

“Sable at Navy Pier is a milestone project for Maverick and one that I am proud to be part of,” said Robert Habeeb, CEO, Maverick Hotels and Restaurants. “It’s the fundamental definition of a true destination and one that is now a permanent part of the fabric of the world-famous Navy Pier, one of Chicago’s most notable and popular landmarks.”

The name Sable is an homage to the historical vessel. During World War II, Navy Pier served as a training center for new recruits in the U.S. Navy and the homeport for USS Sable. Today, Lake Michigan surrounding Navy Pier is said to host more than 143 aircraft assemblages that still remain within its depths.