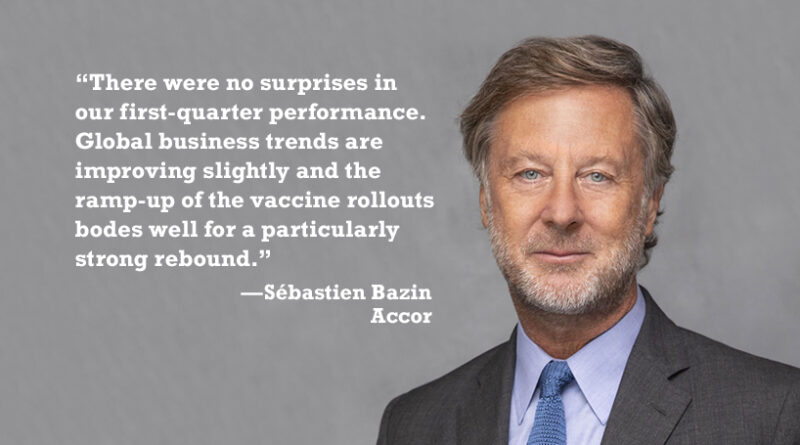 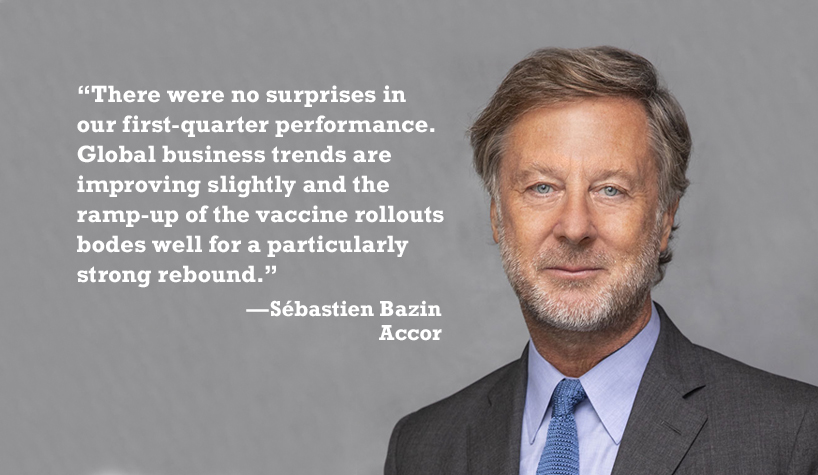 For the first quarter of 2021, ended March 31, Accor reported that RevPAR declines from region to region were dictated by COVID-19 restrictions. Consolidated revenue was $435.4 million (361 million euros).

“There were no surprises in our first-quarter performance,” said Sébastien Bazin, chairman/CEO, Accor. “Global business trends are improving slightly and the ramp-up of the vaccine rollouts bodes well for a particularly strong rebound. As it did in 2020, the group continues to keep a close eye on protecting its cash and cutting costs. Today, all our efforts are focused on the strong recovery expected this summer.”

HotelServices, which comprises fees from management & franchise (M&F) and services to owners, reported $282 million (234 million euros) in revenue, down 64% life-for-like vs. Q1 2019. This decline reflects the COVID-19-related deterioration in RevPAR.

Revenue in the management & franchise (M&F) business was $88 million (73 million euros), down 69% like-for-like vs. Q1 2019, with performance hit by the gradual spread of the virus in various regions. In general, the sharper decline in M&F revenue reflects the collapse in incentive fees based on the hotel operating margin generated from management contracts.

RevPAR report
Consolidated RevPAR was down 64.3% overall in Q1 2021 vs. Q1 2019. This decline reflects an environment that remains at the mercy of the health situation, notably linked to the emergence of the COVID-19 U.K. variant.

RevPAR improved sequentially in South Europe to -63.2%, mainly due to the easing of some of the restrictions.

RevPAR fell by 60.8% in France, reflecting an improvement vs. Q4 2020 as there was no lockdown in France over Q1 2021. This performance is driven by the province (-49.4%), which welcomed domestic business clientele in particular. In contrast, Paris (RevPAR down 74.8%) suffered from the absence of international clientele. The third lockdown implemented since April 6 could, however, have an adverse impact on the second quarter before some restrictions are potentially lifted mid-May.

North Europe reported a sharper drop in RevPAR of 81.9% due to the extension of strict lockdown measures since end-2020.

In the U.K., RevPAR fell by 86.5%. London was more affected than the regional cities with RevPAR down 91.1% and 80.5%, respectively. The gradual easing of the restrictions expected to begin on May 17, bodes well for an improvement in the second quarter.

The 87.1% decline in RevPAR in Germany was similar to that of the U.K.

In Asia-Pacific, RevPAR fell by 54.8%, with mixed performances by region.

In China, RevPAR fell by 42.6% in first-quarter 2021, representing a sharp deterioration vs. Q4 2020 (-18.1%). The region saw a resurgence of COVID-19 cases between January and February, leading the authorities to reintroduce severe restrictions, particularly during the Chinese New Year. The situation improved considerably again in March with a RevPAR down by 31%.

In Australia, the lifting of the restrictions to coincide with the summer vacation period played a role in the sequential improvement in RevPAR, which was down 43.5%, notably for the company’s Mantra portfolio on the Gold Coast. This decline was also mitigated by hotels being used for quarantine, which had a positive short-term impact on RevPAR.

In the India, Middle East, Africa & Turkey region, RevPAR was down 50.5%. This improvement in performance was driven by the United Arab Emirates, and more specifically by Dubai, which saw a strong inbound from Europe as most of the border restrictions have been eased. Whether or not this regional improvement continues will depend on events expected to take place mainly in the second half of 2021, including the Hajj pilgrimage and Expo 2020.

RevPAR was down 72.8% in the Americas. There was an improvement in North/Central America and the Caribbean, with RevPAR down by 76.3%. The recovery is pulled up by the U.S., where the deployment of the vaccines is fast. In South America, where RevPAR fell by 62.9%. An improvement appeared to be underway at the beginning of the year before cases surged again in March, mainly in Brazil with more aggressive variants.