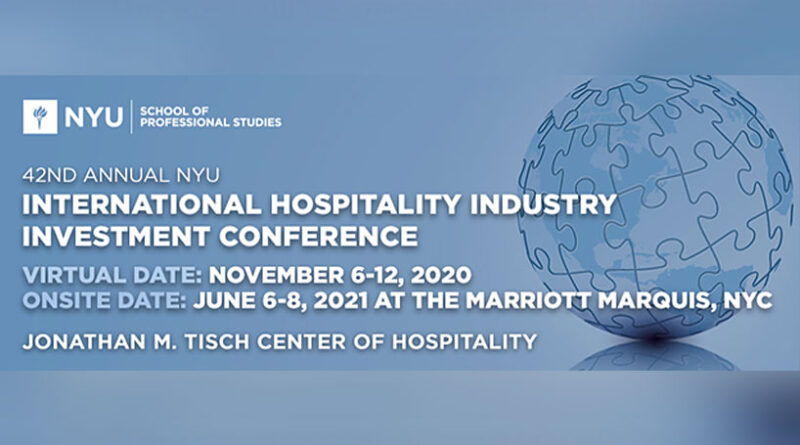 INTERNATIONAL REPORT—On the first day of the virtual 42nd Annual NYU International Hospitality Industry Investment Conference, CEOs from six of the largest hotel companies in the world connected to discuss the U.S. elections and the path to recovery.

Sorenson called the likely split government “the best of all possible outcomes, which will require members of the two parties to work together,” but said he was disappointed that a stimulus bill could not be passed before the election.

“It’s just a sign of profound dysfunction that exhibits the United States government today. You’ve got small businesses that continue to be under enormous pressure, and you’ve got COVID resurging,” he said. “Hopefully as the dust settles on this…they’ll get going quickly on passing a stimulus package that should have three things: first, focus on COVID-19 and what we’re doing about it. The second would be unemployment insurance, and the third would be support for small businesses, and that includes franchisees and select brand hotels that are typically employing maybe just a few dozen people, if that many.”

Nassetta is confident that help will come soon. “I do believe that there is the desire once we get past the noise of the election to get something done,” he said. “We have millions of front-line team members that are still out of work with no prospect anytime soon given that we’re going a bit backwards in terms of the health crisis. We need to make sure that we’re taking care of those folks. We have small businesses all over the country that have a liquidity crisis that is very rapidly turning into a solvency crisis. So, giving the bridge to liquidity particularly for small business through PPP enhancement is going to be critically important.”

Building confidence will be key to getting consumers back to traveling again, he noted. “While I think it’s important to be able to make progress on vaccines, I don’t think that will be enough, particularly if you look at the numbers in terms of the broader public views on trusting vaccines,” Nassetta said. “I think you’re going to have to have an aggressive combination of progress in vaccines, but also a massive testing and contact tracing regime. The combination of those things allows people to assess their own risk and builds confidence to allow people to feel like they can get out and be mobile again. They can do it the safe way and they can do it in a way where they really can judge their risk.”

Hoplamazian stressed that assistance is sorely needed for the small business owners, the mom-and-pop hotel owners included, to survive.

“I think that the issue that’s ahead of us is to ensure that we get additional assistance to the small business owners so that they can actually bridge themselves to the future and maintain a level of employment because I think that that’s going to be essential for the economy at large, but for sure our industry,” he said. “I think some of the other complexities are whether we can actually repurpose the Main Street lending program, which has been a complete failure. They recently made some changes to reduce the loan size so that it can capture smaller businesses. But honestly, the procedures are so cumbersome that I’m not sure that that’s going to make any difference at all.”

Kong explained why the Main Street Lending Program didn’t work. “$600 billion were allocated for this program, but only $2.5 billion has been underwritten,” he noted. “The problem is the Fed has to use banks to underwrite the loans, and they’ve told the banks that they are on the hook for 5%. The banks are not in business to lend money to failing or struggling businesses; they apply the normal credit risk standards. Therefore, many of the hotels and small businesses do not qualify for the loan. Furthermore, they say that the loans cannot be subordinate to any other debt, which makes it almost impossible to borrow any money. Unless the guidelines drastically change, the Main Street Landing program isn’t going to be of much help to the industry.”

Barr brought up the fact that when hotels close, a lot of other businesses struggle as well. “You have to bridge this industry through the pandemic until we get vaccines; until we get test and trace established at a significant level in the U.S. and abroad; and therapeutics are there, and this industry will come back incredibly strong,” he said. “If you don’t, the impact is significant and the things that we often talk about is who’s being impacted—clearly small businesses as we’ve talked about, but it’s the entire system. It’s not just the hotel closing. Then, they don’t buy from the local produce vendor. They don’t buy from the linen supplier. They don’t buy from the engineering company. They don’t buy the paper products. It’s a much bigger economic impact than just one hotel closing. And when we lose those jobs, you’re disproportionately impacting women, ethnic minorities and youth employment around the world. These are people that we need to be helping so we have to talk to governments about helping small businesses and helping our most impacted colleagues.”

Bazin pushed that point further. “Twelve percent of Europeans work for the tourism and travel industry and that is 3.5 million enterprises.The difficulty is 90% of those enterprises have less than six employees,” he said. “In order for us to stay alive and be as efficient as we were in the past, you need the small museums, the small bookstores, the small amusement parks, the small bars, the small restaurants to stay alive and healthy because 90% of our customers are staying not for our hotel. They actually come to stay three days in Rome or Paris or Vienna because they want to experience those small bars and restaurants. We will remain alive, but we need to show help and to be the big brother and to be vocal with [the government]to make sure they provide a stimulus and liquidity for those little guys next to us. That relationship between the big guys and the small guys has never been more evident, more important and more crucial for the industry.”