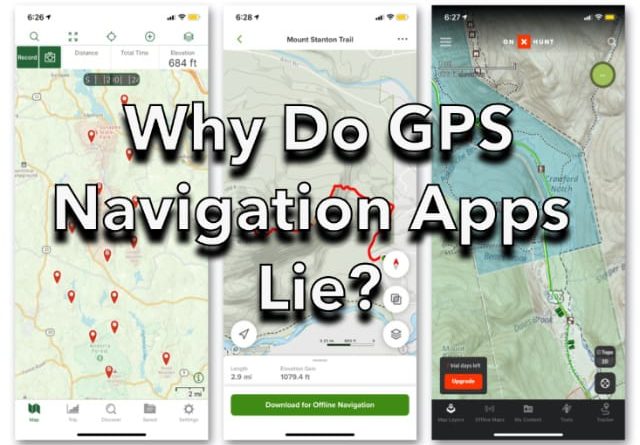 GPS smartphone navigation apps are convenient to use and a real boon for making outdoor navigation more accessible, but they’re best used alongside other navigation tools such as waterproof maps and a magnetic compass. If you’re just experimenting with navigation apps for hiking, backpack, backcountry skiing, climbing, or hunting, it’s easy to overlook their deficiencies. But if like to explore areas farther afield or in great detail, you’ll quickly encounter issues with the accuracy of the information calculated or displayed by them.

That doesn’t mean that GPS navigation apps are any less valuable for backcountry navigation, but it’s important to understand the new issues that they introduce beyond those inherent with traditional paper maps and compass-based navigation, including:

If you’ve ever tracked yourself with a GPS navigation app, you’ve probably noticed that the mileage reported by the app differs from the mileage on a paper map or in a guidebook. This occurs because mapmakers use much more precise tools to measure distance and plot routes than recreational users. PMags has a good article (GPS Mileage Discrepancies) that dives into the nose-bleed details, which I’ll summarize here.

Recreational GPS receivers, like those built into smartphones or dedicated GPS units, are less accurate and far less expensive than the professional GPS receivers used by mapmakers. Professional units are more sensitive and can connect to more GPS satellites providing a more accurate triangulation “fix”. Recreational GPS units can only provide an accurate position fix 95% of the time but can be off as much as 7.8 meters (25.6 ft) the other 5%. These errors add up over time, especially in areas with poor satellite coverage (where the error rate is higher), resulting in distance differences that usually vary by about 10%. That might not sound like much but it adds up over long routes or when you’re hiking over challenging terrain.

Some mapmakers also use a measuring wheel or 100-foot long tape measures and clinometers to measure trail distance and elevation gain. These non-digital measurement techniques are considered more accurate than professional GPS receivers because they measure all the little ups, downs, and turns that hikers make when following a trail and not just a sampling of them. Regardless, all three of these mapmaking techniques explain why recreational GPS navigation app records different mileage than those shown on trail signs, in guidebooks, and on paper maps.

Most of the maps that are displayed in smartPhone GPS navigation apps are stored in geographic information systems (GIS) in what are called layers. Each layer represents a different group of geo-referenced data points that are superimposed, one on top of the another, to create a composite map image. For example, you might have a base topographic map and several separate layers that depict:

These data layers come from government agencies, open-source or crowdsourced data collection projects, and private companies. Problems can arise however when data in these layers is out of date. For example, the route that trails, streams, and rivers take across the landscape can be quite dynamic and change frequently. Trails are closed, abandoned, or rerouted far more frequently than you might imagine. The same is true of streams and rivers as the result of floods.

Here’s an example of a trail (The Black Brook Trail) in my neck of the woods that was closed and abandoned by the Forest Service over 10 years ago but is still displayed on the Gaia Topo base map in GaiaGPS.  It’s notable because I think there’s an expectation that trails displayed on maps are current and up to date. However, I can show you additional examples in New Hampshire’s White Mountain National Forest where abandoned and closed trails are still displayed in GaiaGPS, in addition to misplaced mountain summits and incorrectly located trailheads.

This is just the tip of the iceberg when it comes to data currency and quality control in smartphone GPS navigation app maps. The problem is that no one is actually checking to see whether the map data included in most GPS navigation apps is accurate and up to date. I don’t know where GaiaGPS got its trail data for this map, but the problem of data currency and accuracy is even more of an issue when trail data is open-sourced and/or crowdsourced and not licensed by a land manager or publisher invested in keeping it accurate and up to date.

If you take a look at Guthook’s Guides, which I also use, they’ve solved the data currency issue by severely limiting the amount of map data they display in their apps and by hiring people to hike the trails to keep their GPS data current and accurate. There’s something to be said for a curated approach like that since Guthook’s Guide for the White Mountains, which doesn’t display the abandoned Black Brook Trail shown above (For more on this issue, see: GPS Enabled Trail Guides vs General-Purpose Navigation Apps).

Most GPS navigation apps let you zoom into a map giving you more information about an area, or zoom out to hide details when you want a less detailed overview. This is one of their great strengths, the ability to store and explore a huge amount of mapping data. But the zoom function also hides a lot of detail that can be important in planning and navigating routes. In most GPS navigation apps, you need to remember to zoom down to the highest level of detail to see all of the trails, land features, water features, property boundaries, mountain summits, item labels and such, because a quick glance at the map displayed on your phone can hide them.

In contrast, paper maps always depict all of their details at once (the equivalent of maximum zoom) because they only capture a small area compared to that depicted by a GPS navigation app. This is why it can be handy to carry a local map with you in addition to a GPS navigation app, particularly since they are generally checked, updated, and republished more frequently than online data layers.

GaiaGPS does a pretty good job with zooming and summarizing user data. For example, I have waypoints in GaiaGPS for the 500 highest mountains in New Hampshire and they can really clutter up a smartphone map. When I zoom out and want less detail, GaiaGPS collapses multiple waypoints into a single icon and puts the number inside it, so I know that more detail is available if I zoom back down. That’s very handy.

But the same zoom capability can also introduce map artifacts that don’t exist in the real world and never have. In this example, the Hubbard Brook Trailhead (left) is correctly located. But if we zoom in a bit, it is renamed the Cushman Trailhead, which has never existed.  I have no idea why this occurs, but it’s clearly related to the app’s zoom function. Note: This error only occurs in the GaiaTopo basemap as far as I can see and not other basemaps.

Have you ever noticed how the direction of travel icon on your GPS navigation app is not pointed in the direction you are traveling? Or how Google Maps, says “turn north in 200 feet” instead of “turn left in 200 feet.” This is because your smartphone’s compass doesn’t know which direction you’re headed.

There are a couple of potential reasons for this which are usually described as a miscalibrated smartphone compass. This occurs because your smartphone’s GPS receiver can’t connect to enough GPS satellites to get a position fix, especially if you haven’t changed position for a while, which is used by a GPS navigation app to figure out which direction you’re headed.

You can often reset a miscalibrated compass by waving your smartphone in a figure 8 motion above your head, turning location services off and back on, or restarting your phone.

The trick is realizing that your GPS navigation app’s direction of travel arrow is not pointing in the correct direction before you start walking the wrong way. This is where consulting a map, paper or electronic, or a simple magnetic compass comes into play. You can check that your navigation app is pointed in the right cardinal direction with a simple magnetic compass like the Suunto Clipper or by identifying map features that correspond to what you’d expect to see if you’re headed in the correct direction.

I’ve detailed several ways in which GPS navigation apps can lead you astray. While knowing about them is important, how can you avoid a nasty surprise? The answer is pretty simple. You’re going to want to use all of the navigation tools available to you – apps, multiple maps, and a magnetic compass to make sure that you have the correct information for planning and following a route. Redundancy increases certainty in the inherently uncertain pastime of outdoor navigation.

While the extra maps, map layers, and position fixes afforded by GPS navigation apps are incredibly powerful tools for planning and following routes, it pays to check them using multiple sources and tools when planning or navigating in the field.