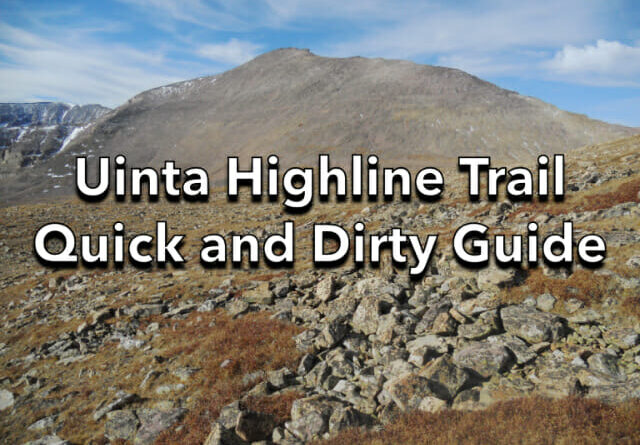 The Uinta Highline Trail is a 104-mile trail that runs along the Uinta Mountain Range in Utah’s Ashley National Forest and Wasatch-Cache National Forest. The trail is noted for its expansive views and varied terrain, which includes lodgepole forest, glacial valleys, alpine lakes, and high mountain passes. The trail has an average elevation of 10,700′; it crosses eight mountain passes that are over 11,000′, requiring 16,700′ of elevation gain end-to-end. The trail’s highpoint is Kings Peak at 13,528′.

The Uinta Mountains uniquely run east/west, whereas most other ranges in the Rockies run north/south. The Highline Trail begins in a forest consisting primarily of lodgepole pine and opens sometimes into big meadows. In each of the eight basins along the trail, you will be going in and out of the forest, occasionally passing lakes.

The upper ends of many of the basins are tundra. Whenever the trail leaves the forest and climbs over a mountain passes, you’ll find yourself in exposed, rocky, tundra-like terrain. Depending on the month and the prior winter’s snowpack, expect to cross some snowfields too. The Uintas are made up of a metasedimentary quartz-sandstone which is somewhat crumbly and is slowly eroding. Because of this, trails are exceptionally rocky, with grapefruit to basketball-sized rocks embedded in much of the trail.

If you want to do the full hike, start at the Highline Trailhead at McKee Draw, and end at the Highline Trailhead at Hayden Pass. This is about 104 miles. I would recommend this version of the trip simply because it is the longest and may give you that feeling of accomplishment, having hiked the whole thing. Both trailheads are near paved roads, as well, making the shuttle exceptionally easy (under three hours according to Google Maps). Starting at McKee Draw gives you a pretty mellow first 25 miles, meaning you can warm up slowly instead of going over a giant pass right out of the car.

Some folks want to dive right into the most dramatic-looking section of the Highline Trail and so start at the Leidy Peak Trailhead. If you don’t have time for the full Highline, this is a good option. One downside to this is the longer shuttle (about 4 hours each way according to Google Maps). You’ll be on dirt roads for a while, which are slower, and frankly jarring to a lot of people. Even though the 13 miles between this trailhead and the Chepeta Lake Trailhead are not designated Wilderness they have the same Wilderness character as the remaining 66 miles with the exception of that one road just before Chepeta Lake.

If you want the entire trip to be in designated Wilderness, this is the trailhead for you. Starting at the Chepeta Lake Trailhead allows you to skip all the road-walking. For 66 miles you won’t cross a road or hear a motorized vehicle. One downside to this is the very long shuttle (about 4 and a half hours according to Google Maps).

Backpacking permits are not yet required for hiking the Uinta Highline Trail or any other part of the Uintas.

There’s a resort on the south slope of the Uintas with a sign on the door that reads: “Today’s Weather Report: Rain. Unless it doesn’t.” I think this perfectly sums up the weather in the Uintas. In years past it used to rain every single day at 4 pm, without fail. Not anymore, though. As weather patterns are altered due to climate change, rain is too difficult to predict in the Uintas.

That said, watch how the clouds stack. Clouds will start flying over you from the west often in late morning, and stack up from east to west. Once the stacking is complete, expect a storm. If this seems to be happening, try and climb over mountain passes earlier rather than later in the day. Lightning storms in the Uintas are downright awe-inspiring, and you don’t want to be exposed when one of them rolls in.

The most commonly hiked peak along the Uinta Highline Trail is King’s Peak. It is the highest peak in the range as well as the highest point in Utah at 13,528 feet. From Anderson Pass, it’s only a short hike to the top. There are several other peaks over 13,000 feet and many of them are accessible from the Highline. Make sure you give yourself extra time if you’re going to be peak bagging.

There are black bears in the Uinta Mountains, so store your food and smelly things appropriately. Bear canisters are not required.

The nearest airport is the Salt Lake International Airport in Salt Lake City, Utah. Getting from there to the Uinta Highline Trailhead is easiest with a car. It is about an hour and a half drive from Salt Lake City to the western terminus of the Highline Trail at Hayden Pass. It is then an additional three hours to shuttle to the eastern terminus at McKee Draw. The quickest shuttle is on the northern side of the Uintas, partly in Wyoming, but you can also drive through the Uinta Basin on the south side.

Salt Lake City is the nearest city and the best place to load up on groceries and fuel canisters. There are plenty of grocery stores to choose from including Whole Foods and Trader Joe’s. There’s an REI just a couple of minutes from I-80 as well. On the way to the western terminus of the Highline Trail at Hayden Pass, you will pass through Kamas, which has a decent grocery store, a couple of food trucks, and some diners. Samak is just beyond and has a bar with typical bar food.

If shuttling through Wyoming you will drive through Evanston which has motels, restaurants, and groceries. You will then pass through Mountain View and Manila among several other tiny towns with minimal amenities. If shuttling along the southern side you will go through Heber, Duchesne, Roosevelt, and Vernal. There are plenty of lodging and food options in each of these towns. Vernal is the largest town near the eastern terminus, so if you need a motel on that end of the hike, Vernal could be the place.

All of the trailheads mentioned here have good parking. Because the Highline Trailhead at Hayden Pass is so close to Salt Lake City it is sometimes pretty packed. A recreation pass is required for parking here and needs to be displayed on your dash. The America the Beautiful – National Parks & Federal Recreational Lands Annual Pass can be used as well. The Highline Trailhead at McKee Draw on the other end, by contrast, is often quite empty as it is not popular at all. No recreation pass is required there.

Most of the Highline Trail is in the Ashley National Forest. The local Forest Service recommends calling 911 in an emergency.

Some phones get cell service at Anderson Pass which is the highest point on the trail and roughly the halfway point. I know Verizon has service there. You may get service in other high places, but I don’t recommend relying on it. Given the remoteness of the area and lack of reliable cell phone service, I’d consider carrying a satellite GPS messenger like the Garmin inReach Explorer+ or Mini that lets you send text messages to rescuers.

Similar to other Designated Wilderness Areas, you are expected to camp 200 feet from a trail, water, and other campers.

The High Uintas Wilderness has a unique rule for fires. Over the years, lazy campers have used up much of the firewood in high use areas around lakes. Once the wood was mostly gone they took to hacking branches off live trees and even cutting them down. In response, the Forest Service now requires you to be ¼ mile from any lake if you want to have a fire. This way the forests surrounding the lakes may be able to recover.

As a former ranger, I have to say please bury your poop and pack out toilet paper. I spent a few seasons out there and found piles of poop and toilet paper nearly every day of my tenure, having to bury it with my shovel. The Highline Trail is a high-use area, despite what much of the internet may tell you. Take care of it for the sake of the ecosystem, the rangers, and future hikers alike.

The complete list of Wilderness regulations can be found here: https://www.fs.usda.gov/detail/uwcnf/about-forest/districts/?cid=fsem_035477

The National Geographic Trails Illustrated High Uintas Wilderness Map is probably the best physical map of the area. The Highline Trail is clearly marked on this waterproof map, making it very easy to use. There are contour lines and elevations are often noted, including on passes along the route and prominent peaks nearby. Wilderness regulations and Leave No Trace guidelines are noted on the map too so you don’t really have any excuse for not following them.

The Delorme Utah Atlas and Gazetteer will help you navigate the shuttle if you don’t have a phone or if  your phone loses service.

Gaia GPS App allows you to download maps in the area where you will be hiking. This is the app I used when I hiked the Highline, although I didn’t check it all that much because the trail is quite clear for the most part.

These guides and information sources can help you plan trips to local alpine lakes and other trails in the High Uintas.

Ben Kilbourne has been backpacking at least once a month every month for the last twelve years. His explorations have taken him all over the west, but especially the canyon country of the Colorado Plateau. The geography of the west has become familiar to him. He has developed a rudimentary understanding of its geology, and an awareness of the subtle changes in flora and fauna due to soil, elevation, aspect, and precipitation and how these elemental things interact with both ancient and modern humans. His experiences on the land, whether triumphant or thwarted by events either in or out of his control, have provided the foundation for the work he does. Find Ben’s paintings, songs, and essays here http://benkilbourne.com/.