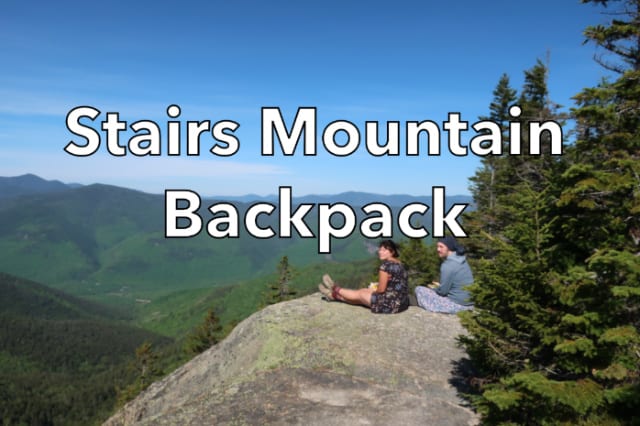 Stairs Mountain is a peak in the Presidential Range – Dry River Wilderness Area south of Mt Isolation and off the Davis Path. It’s the site of a magnificent cliff with far-reaching views of the southeastern White Mountains and several major peaks including Mt Carrigain. From a distance, the cliff looks like a staircase, hence the name Stairs Mountain or Giant Stairs.

There’s also a campsite on Stairs Mountain with space for a few tents, just footsteps from the cliff. It’s dry, however, so you have to haul your own water up with you. I recently camped out there on a gorgeous spring day, humping 6 liters up 800 feet from the only nearby stream at 2600′ on the Stairs col trail.

This was just a one-nighter of a trip, combining several objectives. I’m almost done hiking the 650 odd trails (1450 miles) in the AMC White Mountain Guide for a second time and had a few trails to finish on the way out to Stairs Mountain. I also planned to climb a nearby trailless peak named East Stairs, which is on the New Hampshire 200 Highest List, the following day. It’s a fairly substantial hike to the start of that bushwhack from a road, so it made sense to break my trip up into two days. My friend Ken hiked in the next morning for the bushwhack and gave me a ride back to my car afterward. I’ll spare you the details of the bushwhack, suffice to say that it was bloody. Definitely Type II fun.

There are several different ways to get to Stairs Mountain on the White Mountain Trail system. On this trip, I hiked in from Bartlett, NH on the Mt Langdon Trail, the Mt Parker Trail, the South Resolution Spur, and the Davis Path, with a detour down the Stairs Col Trail to get water. That’s a substantial route for one day with close to 4,000 feet of elevation gain. It paid off handsomely though since Mt Parker and South Resolution also have jaw-dropping views.

I parked my car at the Mt Langdon Trail trailhead in Bartlett and climbed Oak Ridge which is the first big hill of the day. The leaves on the trees were finally starting to pop out and the forest was a sea of bright green. We’ve had a long, drawn-out spring this year in the Whites, with an odd mix of hot and cold weather. So those new leaves were a sign of the warmer and longer days of summer to come.

I crossed the Wilderness Boundary and began the climb up to Mt Parker, which is on the 52-with-a-View list. The weather was clear with perfect visibility and an azure sky. Parker is a long hike from the road and about the limit in terms of distance and elevation gain for most day hikers. When I reached the summit, I had the peak to my own and ate lunch while gawking Mt Washington and its southern ridges.

My next destination after Parker was the little-known South Resolution Spur trail, which is an overgrown side trail leading to an open ledge with still more views. People who are hiking all the trails in the White Mountain guide know about it, but few others do. I’d been waiting patiently all winter for the snow between Parker and the Spur trail to melt, since it’s virtually inaccessible when deep snow covers the trail. This section of trail is seldom hiked.

I hiked out the spur trail which is only 0.2 miles long and clambered up onto the ledge. If you squint, you can see the Nancy Brook Cascades on the other side of Crawford Notch from the ledge. I sat there a long time and ate another sandwich. I don’t get out there very often and wanted to soak in the solitude.

I got back on the trail and continued to Mt Resolution, which also has a treeless summit. The summit ledges are often wet and slippery and in winter they’re covered with ice. But they were dry this time around as I cross over the peak, dropping down to the Davis Path below.

I’d run out of water by then (I’d carried 3 liters because I know the route is dry) and needed to resupply. This required a slight detour down the Stairs Col Trail to a reliable stream. I became a little worried when it was dry at 2800′ but continued downhill to 2600′ when I heard the flow through the trees. If needed, I could have dropped all the way down to 1400′ and stayed at the old Rocky Branch Shelter on the Rocky Branch River.

I filled up the extra reservoirs I’d brought to haul water and started the grinding climb up the Stairs Col trail to Stairs Col and then up the Davis Path to Stairs Mountain and the campsite. My legs were pretty tired already, so I was moving slow, but steadily with the added 12 pounds of water.

I was the first person to arrive at the campsite and got the best tent site, near the cliff-face but with some tree cover to block the wind. I set up my gear and then sat out on the cliff until dinner, admiring the view. I sat there a long time gazing out into the great beyond without thinking much of anything except awe.

Peter and Layla arrived in the evening to share the campsite with me. They were starting a multi-day circuit up to Mt Washington and were fun to talk to. They’re both from Montpelier, Vermont, where the trails were still closed for mud season to limit trail erosion. I barely made it to sunset though and went to sleep as the sun was setting.

But the story of our bushwhack out to East Stairs is a tale for another time.