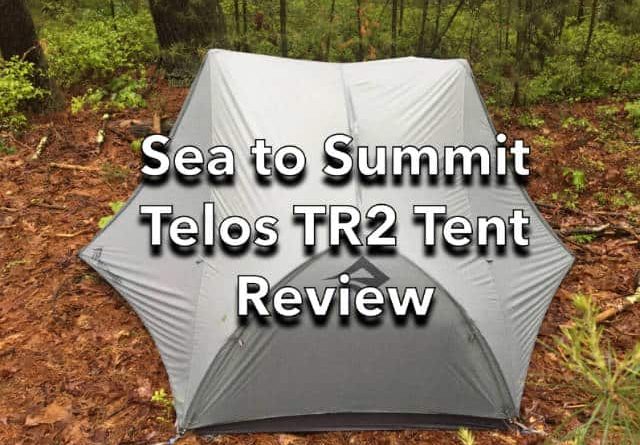 The Sea to Summit Telos TR2 Two-Person Tent is a double-wall tent with a freestanding inner and a semi-freestanding fly (i.e. the vestibules need to be staked out). It is part of a new line of double-wall tents that feature what Sea-to-Summit calls a tension ridge pole architecture which increases interior volume and head-room.

The Telos TR2 has received a lot of attention as an innovative and flexible tent with multiple options for pitching, including fly-and-footprint, fly-only, double-wall tent with an inner-first set up, double-wall tent with a “dry setup” / fly-first pitch, and a trekking-pole supported “Hangout Mode” canopy for sun and rain protection with room for camp chairs underneath. It has won a number of media awards, including Outdoor Retailer Magazine’s Hot Pick Award, Backpacker Magazine’s Editor’s Choice Award 2021, and inclusion in Outside Magazine’s Top Tents for Summer 2021. We beg to differ, but we’ll let you decide for yourself.

While I applaud Sea to Summit’s creative thinking in developing a tent with so many pitching options, and look forward to seeing how this develops over time and future iterations, I found numerous problems with construction quality, complexity, and inefficiency in the pitching process, and performance problems, especially in the wind and rain.

The Telos tent also comes in a 3 person version, and both the 2P and 3P versions of the Telos are also available as 3+ season tents with a solid fabric inner.

The backbone of the Telos TR2 is a hubbed pole system that is connected into a single, collapsible unit with shockcord. The frame looks like two letter “Y”s attached together at their posts, a common shape for double-wall tent poles. But the distinguishing feature is the Tension Ridge: a V shaped, attached cross pole whose ends point up to the sky and lift the edges of the tent peak to create more headroom for two users. Normally, a modified dome-shaped tent curves down on the sides, so the most height is found right in the center of the tent, great for a single user, but less headroom for two.

The Telos has several pitching options, but the primary decision is between an inner-first pitch (common to most American double-walled tents made by large manufacturers) or a fly-first pitch (often seen on European and ultralight/cottage industry tents and better for keeping the interior dry in wet weather).

The inner first pitch is simpler but it exposes the mesh inner tent to rain for several minutes before the fly is attached. For this reason, it’s better as a fair-weather pitch. I’ll spare you the nitty-gritty setup details of each pitch, but the inherent flexibility comes at the expense of much complication.

Setting up the Telos TR2 is also best done by two people, not one, particularly in wind and rain. This might not sound like a problem, since it is a two-person tent, but I believe it’s important for 2 person tents to be easily pitched by one person. For efficiency reasons, one person will often pitch the tent while the other person gets water or prepares dinner. And for safety reasons, if one hiker is injured or hypothermic and needs shelter, they’re not going to be able to help. Additionally, many tall hikers or hikers with dogs buy a 2 person tent for extra room at a small weight penalty, and as much as we’d like them to be, dogs are no help with pitching tents.

The vestibules of the Telos TR2 feel generous for keeping a backpack and shoes near the foot end of either side without them getting in the way of your entry and exit. They have a catenary cut (arch) along the bottom to aid in a tight pitch as well as ventilation. You can roll up one or both sides of the vestibule on calmer/ hotter nights. There is also a neat feature where you stake out both vestibules and disconnect the rest of the fly, and roll it up so you just have a small tube of the fly arcing horizontally over the top of the tent, from vestibule stake to vestibule stake.

The Lightbar is a double-ended drawstring stuff sack for the tent poles with a rigid semicircle of plastic inserted along its length that serves double duty as a way to let your headlamps provide overhead tent lighting. It is a neat idea, reminiscent of a fluorescent light tube, but it feels overbuilt and overly complicated for what it does. A number of other tent manufacturers include tiny pockets of white mesh on the ceilings of their tents to slip your headlamp into for an imperceptible amount of weight. They are always there when you need them and disappear when you don’t. The Lightbar also cuts into the headroom of the tent, one of its biggest selling points.

Additionally, the Lightbar is located at the peak of the tent, so it is over your chest when lying down, instead of over your head. That’s fine if you’re sitting up to look at maps or change your clothes, but if you like to read while lying down, your book will be in the dark when using the Lightbar. You’ll have to remove it and wear the headlamp on your head to read.

The stuff sacks for the inner tent and fly have snaps on them to connect to the inner corners of the tent giving them double use as “gear buckets” in addition to the mesh pockets sewn to the inner walls for small essentials. This dual-use aspect is one of my favorite features of the Telos because the gear buckets are able to hold bigger and much heavier things than many mesh pockets do. The gear buckets are the best solution I have ever seen for holding a water bottle upright inside your tent for easy access.

The Lightbar and gear bucket stuff sacks work together as a packing system–you can separate them and share them among backpacking partners, or link them up into a single package, by slipping the Lightbar into the external pockets on the inner and fly stuff sacks, and attaching the metal bachelor buckle of each stuff sack to the corresponding webbing loop on the opposite sack. This makes a sizeable package 19.5 inches long by 5.5 inches wide bulging to 7 inches wide at the middle that feels awkwardly connected and not totally secure; I would feel nervous carrying the package strapped to the outside of my pack. I think keeping them as separate pieces is a much better option.

The Y-shaped tent stakes included with the Telos are made from 7075-T6 anodized aluminum, a super-strong material, and they’re light for Y stakes at 0.3 oz each. They have 3 teeth to capture guyline at different levels. However, they feel like a mismatch with the Telos TR2 which doesn’t have guyline on the main stake points, but rather 3/8″ webbing, which is quite a bit bigger than the teeth, so the loops don’t catch easily on the stakes. The stakes also have rectangular edges on the top which hurt when you try to push the stakes in with your palm, even into soft ground.

The Telos has an Apex Vent, a rainbow-shaped zipper backed by mesh on the roof of the tent, covered with an awning of fly material. The idea is that, since heat rises, warmer, moist air can escape through the Apex Vent while cooler, dry air enters from the Baseline Vents (the space between the ground and the rainfly).

In the rain, with 100% humidity, ventilation is critical. Because of the awning, I hoped the inner tent would be protected from the rain with the vent open. But I found that in mild all-day rain with no wind, a not insignificant amount of water leaked in through the Apex Vent. In a downpour or storm with wind, it would have been much worse. Because the awning is fixed in tension and can’t be tightened further, I found that rain tended to pool in the awnings slack. Also, the Apex Vent can only be opened and closed from the outside, so if it’s open and you feel the rain coming in, you have to exit the tent to close it up.

This seems like a crucial design flaw. If the Apex Vent can’t keep out even light rain, what is its purpose? Apex or peak vents allow moist air to escape when the rest of the tent is battened down for weather protection. If it’s not raining, you can keep the vestibule doors open and have massive floor-to-ceiling ventilation on both sides, or roll back the fly entirely.

I had numerous issues with durability, construction, and design issues of the Telos TR2 from the very first time I set it up and continuing throughout my testing. I am someone who takes very good care of my gear; the tent never got any rough treatment by any means, only real-world field testing in the wind and rain.

In all fairness, Sea-to-Summit says they sent us a pre-production version of the Telos TR2 for review although we can’t see any difference in terms of packaging between the tent we received and retail units. It does beg the question of how the tent was able to win so many awards from other publications who presumably received pre-production models as well.

Here is a partial listing of some of the construction or design issues I encountered:

I’m excited to see Sea to Summit sell a double-wall tent, there are too many design, construction, and usability issues with the Sea to Summit Telos TR2 2P Tent for me to recommend it. I would wait for a second version of the tent that will hopefully fix the issues I describe above and the feedback they’re getting from other testers.

Disclosure: The author received a tent from Sea to Summit for an honest review.

Greg Pehrson is an ultralight backpacker who was bitten hard by the MYOG (make-your-own-gear) bug. He repairs, tinkers, and builds gear, often seeking to upcycle throwaway items or repurpose things from outside the backpacking world.