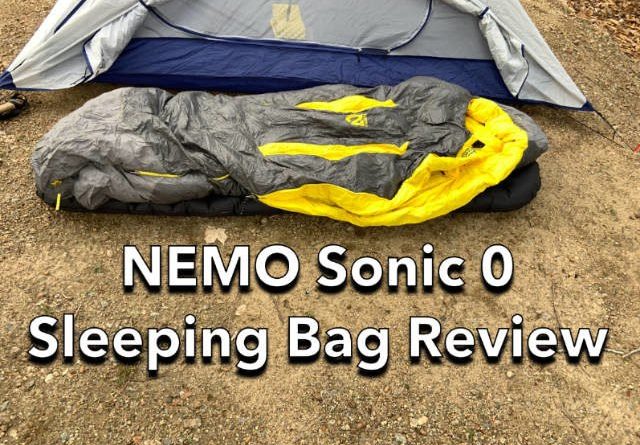 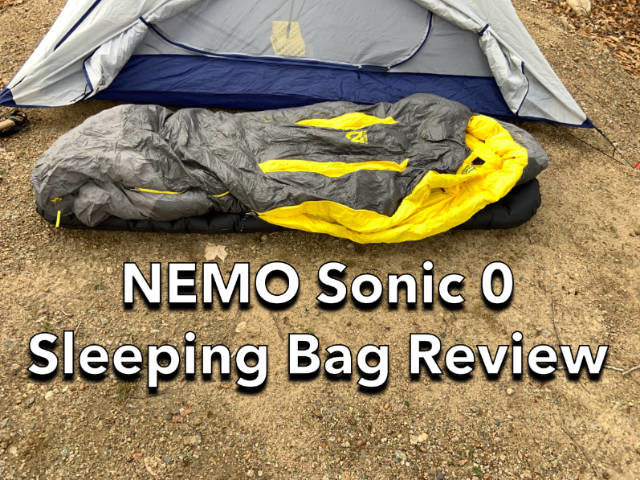 The NEMO Sonic 0 is a down-insulated sleeping bag that can be comfortably used from zero degrees Fahrenheit up to 40 degrees. (This is the 2022 version which has been significantly updated from previous models.) While the Sonic 0 can be used as a winter sleeping bag and has all the advanced features you’d expect, it has special thermo-regulation gills on the chest that let you vent it in warmer weather. If you’re a cold sleeper or want a single sleeping bag that can span winter-to-spring or fall-to-winter temperatures, I think you’ll be impressed by the NEMO Sonic 0’s versatility and comfort.

The Sonic 0 has all of the standard features you’d expect on a premium cold weather sleeping bag, including a draft collar, two-way side zipper, zipper draft tubes, taped zipper stiffeners, spacious dimensions, and a very warm hood. It also includes two fairly unique features, which differentiate it from most other cold weather sleeping bags: Therm-Gills and Waterproof Ends (footbox and hood).

The draft collar is a down-filled tube that drapes over your upper chest and neck and around your upper back to seal in the heat generated by your lower body. It is secured on one side by velcro and tensioned on the other side with an elastic cord and cord lock that is easy to use with one hand when the bag is closed and zippered up.

There’s a 3/4 length two-way zipper that begins above the footbox and runs all the way to the hood. Having a two-way zipper lets you vent the bottom of the bag if you’re too warm. The zipper has two draft tubes (most bags only have one) that run alongside the zipper and fold together to block any drafts from entering through it. The fabric along both sides of the zipper also has a fabric stiffener to prevent the slider from snagging and tearing on the bag’s fabric which is very helpful on a high fill bag.

Dimensionally, the Sonic 0 is cut wide so you can store extra gear, your boots, or water inside with you when you sleep to prevent them from freezing. That extra width also lets you sleep on your side or move around at night with ease. If you have to 12 hours in a sleeping bag, you’ll appreciate the extra room!

While the Sonic 0 has a mummy hood, it’s shaped more like a jacket hood with close-fitting sides than a more conventional arched bag-width mummy hood. The fitted sides mean that the hood moves with your face when you turn, giving you the ability to sleep on your side in the bag, without drenching the side of the hood with moist exhalations. NEMO’s spoon-shaped sleeping bags transformed sleeping bag design by making it possible for side sleepers to get a good night’s sleep so this feature is consistent with their core DNA.

But there are more differentiating features on the Sonic 0 that you just won’t find on other comparable sleeping bags, including the Thermo-Gills and a waterproof footbox and hood.

Thermo-Gills are lengthwise zippered channels sewn over the chest of the Sonic 0 that release some of the warm air trapped in the down baffles without letting drafts in. Earlier versions of the Sonic had these zippered channels on the outside of the bag only, which made them impossible to reach if you were snuggled inside. While they were still useful, the new version of the Sonic adds another pair of zippers on the inside of the bag so you can further adjust your warmth level without getting chilled.

For example, if you run your hand down the front of the chest (on the inside) when the outer or inner zippers are opened, you can feel that the liner is noticeably cooler than on either side. If you’re still too warm, you can loosen the draft collar and let additional heat out. I’ve taken the Sonic 0 up to the mid-forties (F) using these temperature regulation features and have been really impressed by how well they work.

If you’ve ever slept in a single wall tent, it’s common to wake up with a sleeping bag footbox or a hood that’s damp from tent condensation where they touch the walls. It’s also a common occurrence in winter tents, especially when you have to keep the door closed at night. But NEMO has encased the Sonic footbox and most of the hood in waterproof/breathable fabric to prevent the moisture from making the sleeping bag’s down insulation wet.

For instance, I’ve slept with the Sonic 0 in three different single wall tents and noticed water droplets on the outside of the footbox every time. While the exterior fabric is easily dried by putting it out in the sun while you make breakfast, it’s nice to know that the down insulation, which would take longer to dry, hasn’t gotten wet and will retain its loft, especially on a multi-day trip. It’s the same with the hood, which is also prone to condensation transfer.

The NEMO Sonic 0 is a cold-weather down-insulated sleeping bag that has a much wider temperature range than its name would suggest. While it is designed to keep you warm in 0-degree weather, it has a temperature regulation feature called Therm-Gills that let you vent warmth up to about 40 degrees. I can’t think of any other cold-weather sleeping bag with that kind of versatility. If you like to winter camp but want to extend the season into early spring or autumn, the Sonic 0 is an excellent option. You can then buy a much less expensive 40+ degree bag or quilt to cover the warmer months.

Now, the ratings for this bag are based on the ISO sleeping bag temperature rating standard, so that 0-40 degree Fahrenheit temperature rating is good for men and warm sleepers. If you are a cold sleeper or a woman, the temperature range will fall between 14 and 40. The difference is due to the fact that women aren’t generally as large as men and don’t generate as much body heat. If you are a woman and need a 0-degree bag, I’d consider the NEMO Sonic -20, which has the same feature set but is rated for colder weather.