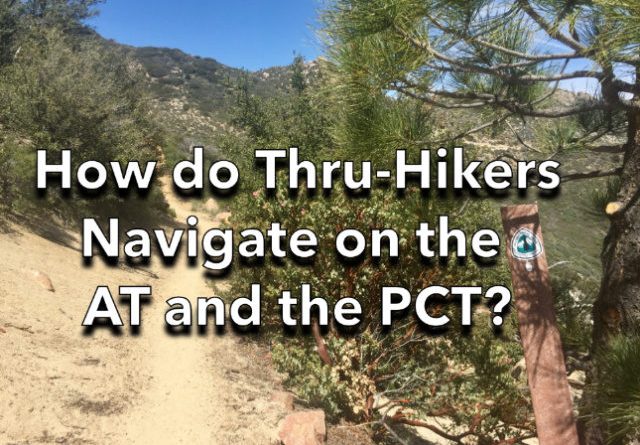 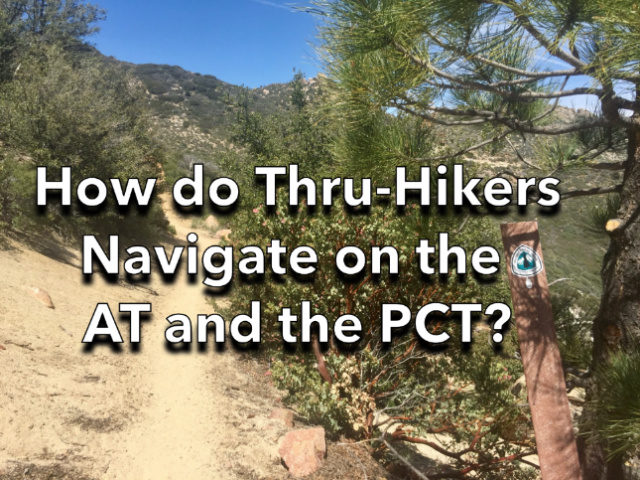 When preparing to thru-hike the Appalachian Trail or Pacific Crest Trails (AT & PCT), people tend to wonder just how much navigation skill is actually needed to stay on the right path and not get lost. I’m often asked how I found my way when thru-hiking these trails and my initial reply usually starts with, “I followed the white blazes on the AT and the emblems on the PCT.” That’s my basic answer, and honestly, the majority of hikers for these long trails do just that.

While you really don’t need much navigation savvy to successfully complete the AT or the PCT, it’s definitely better and safer if you do have some basic navigation skills.

When it comes to thru-hiking the AT or the PCT, the most important navigation skills are knowing where you are and whether you’re headed in the right direction on the trail. This is traditionally done with a map and compass and can include skills like knowing how to read contour lines, timing and pacing, and overall paying attention to your surroundings.

These are fundamental, basic navigation skills to have. However, to be transparent, if you were to survey a large group of thru-hikers, many wouldn’t be carrying a map or compass. Yet many of those same hikers would tell you they successfully completed the AT or PCT without them.

Here’s what they’d probably tell you:

And you know what? To some degree, they’re right. But, I still don’t think that blindly walking these trails is a good idea.

Why You Need Some Navigation Skills

Reality check: S**t happens. Sure, the AT and PCT are well-traveled, but parts of both trails can get remote in sections in the backcountry. What if you’re hiking late in the season and no one’s around? I remember when I was in the 100 Mile Wilderness on the AT in late September and I saw very few other people on the trail. What if your phone dies or you drop it in a river? What if it’s a big snow year in the Sierra Nevada section of the PCT and you can’t find the trail, or you’re walking in white-out conditions in the White Mountains of New Hampshire on the AT (this happened to me) and you can barely see a few feet in front of you?

After I thru-hiked the AT, I developed a greater appreciation for hiking navigation skills. I wanted to feel like an experienced hiker with more of an ability to read a map, contour lines, and orient. I took a class at a local outfitter to learn some basic skills and I felt more empowered. I felt that if something happened while out hiking, I had a better chance of handling it. For all these reasons, this is why I believe it’s a sound idea to have some navigation skills when hiking the AT and PCT.

The Most Important Navigation Skill

In my opinion, the top navigation skill needed to hike the AT or PCT is paying attention. Having a sense of where you’re headed in your day, knowing what markers to look for, and being present in your surroundings can really help to keep you on the trail and keep you safe. Whether I was on the AT or PCT, I always looked ahead in whatever guide I was using to know what to expect. This allowed me to feel informed and more prepared in terms of terrain to watch for, water sources, etc.

To support the skill of paying attention, these are some other tools I’ve used or ones that have been used by other thru-hikers I know.

The iconic white blaze on the AT is a 6-inch-long by 2-inch-wide white paint mark on a tree, rock, telephone pole, or fence. It functions as a trail marker to let hikers know they’re still on course. They are extremely frequent on the AT, to the point that if I didn’t see one after a few minutes, I questioned if I missed a turn. Of course, that involved me paying attention, which I’ve already said is a vital navigation skill.

On the PCT, there are metal or wood emblems of the PCT symbol installed on trees and at junctions or intersections to keep us hikers going the right way. These weren’t always as frequent as the white blazes on the AT and sometimes I found I could go a whole day or more without seeing an emblem.

To quote directly from the PCTA website: “The PCT is not always easy to find. Carry maps and a compass and know how to use them. The detailed turn-by-turn descriptions in guidebooks can also be helpful in keeping you found. We recommend learning navigation skills from a skilled and experienced teacher.”

The popular trend these days is to use a navigation device instead of carrying a map and compass or a GPS unit, by using a Smartphone app like Guthook or GaiaGPS. In fact, I rarely saw anyone whip out a paper map when I was thru-hiking the AT and the PCT. Although, when I met my now boyfriend, Potatoes, on the PCT, I was pretty impressed he was carrying topographic maps of the trail and not using Guthook.

Using an app has many advantages, such as being easy to have on your phone with less bulk. Guthook’s AT and PCT Guides (commonly called ‘Guthook’) are handy because you can read other hikers’ comments about things like whether a water source is still flowing or updates on trail conditions, which a map can’t tell you. Yet remember: what if your phone dies? Having a back-up form of navigation and knowing some skills can prevent a situation from turning sour.

I used Guthook while on the PCT in 2019 and have nothing bad to say about it. When Potatoes and I finished the Sierra Nevada Section this past summer, I had Guthook on my phone and he put GaiaGPS on his. I enjoyed using Gaia because it’s a topographic map, so we could see landmarks like lakes and learn the names of mountains around us. It let us appreciate what we were looking at more than Guthook, which is much more trail-specific.

Using a physical, hand-held map or GaiaGPS lets me do things like read contour lines and use my brain a bit more in other ways. For example, if I saw a river coming up, I could be fairly sure that would be a reliable water source. However, in a low snow year, I was pretty certain a small creek would be dry. I learned I could figure things out without other hiker comments.

Navigation apps are great tools, yet using a map combined with the skill of paying attention makes me feel more engaged while hiking.

Having a guidebook to complement the trail markers and further support navigation is very helpful. On the AT, I carried The A.T. Guide — A Handbook for Hiking the Appalachian Trail by David ‘Awol’ Miller, which is also now available in digital form for your phone. It was a valuable resource for me in terms of knowing distances, when a shelter was coming up, the next town stop, and most crucial, when the next water source would be.

It also has an elevation profile, so I knew what to anticipate for my day’s walk. If I ever questioned where I was, I could reference the book and ask myself if I passed such and such shelter or water source, for example. Again, this made it necessary for me to pay attention to my environment as I hiked, and I would often keep track of my timing to have a sense of how far I was between markers. If you get an idea of your own personal pacing, this is a good tool for measuring where you’re at on trail distance-wise.

While you technically don’t need serious navigation skills to hike either the AT or PCT, it is beneficial to have some, just in case. See if an REI or local outfitter nearby you offers an intro class on map and compass navigation skills. There’s also a wealth of resources available to teach yourself on YouTube.

At the bare minimum, know where you are in relation to the cardinal directions (N, S, E, W) while on trail and develop a keen sense of paying attention to your surroundings. If you rely on your Smartphone for GPS, always carry extra batteries or a battery pack. You may also want to consider hiking with someone if you don’t have a back-up form of navigation because there’s no guarantee your phone won’t die, break, or get lost.

Finally, if you don’t see a trail marker for a really long time, just turn back and retrace your steps until you do. Both the AT and the PCT are rather easy to follow without heavy-duty navigation abilities, but knowing the basics will make you feel smarter and more secure.

Heather Daya Rideout has been a life-long outdoorswoman. Her pursuits and passion for hiking and camping have taken her around the world for many long-distance trips; such as backpacking in Nepal, India, South America, Morocco, Europe, and North America. Heather has hiked the Appalachian Trail, 2,250 miles of the Pacific Crest Trail, and a route of 1,500 miles combining several Camino routes through Spain and Portugal. On any given day she would rather be outdoors than anything else and her lifestyle is a direct reflection of that deep love affair with nature. Heather currently lives in Idaho and she’s having a wondrous time experiencing the beauty it offers. You can read some of her other writing at www.wanderyoga.com.