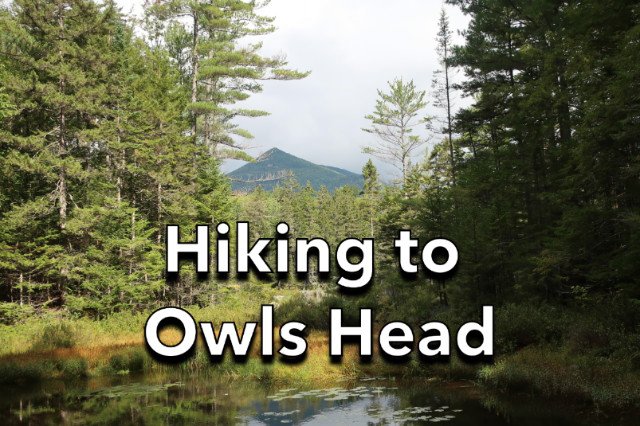 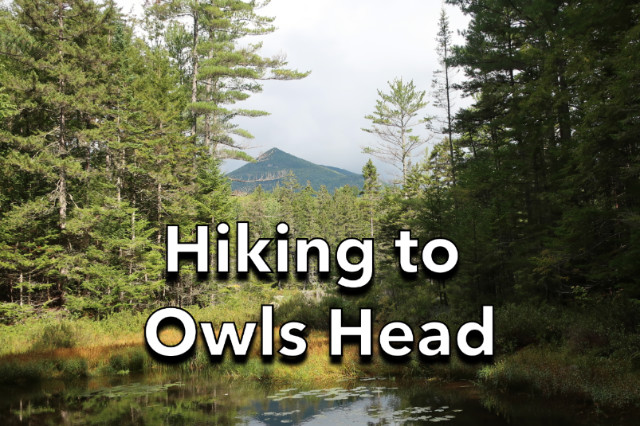 Owls Head Mountain (4025′) is a White Mountain 4000 footer that is located deep in the Pemigewasset Wilderness. While it’s not a difficult peak to climb in terms of elevation gain, it’s an 18 mile out and back day hike with numerous stream crossings if you follow the trail system from the Lincoln Woods Trailhead. You can reduce that to about 16 miles by following herd paths which eliminate several stream crossings and bypass the avalanche slide that’s normally required to climb to the Owls Head summit.

The Black Pond and Brutus Bushwhacks

The weather forecast looked favorable for a 2-day backpacking trip out to Owls Head to climb the peak and then fly fish Lincoln Brook, a beautiful freestone stream that runs along the west and south sides of the peak. I was also eager to scout out two herd paths, the Black Pond Bushwhack, which shortens the distance from the Lincoln Woods Trailhead, and the Brutus Bushwhack, which avoids having to climb up and down an intimidating avalanche slide to the summit ridge.

I’d hiked both bushwhacks some 10 years ago in winter on a trip where the leader knew the route, but I just followed along, not really knowing where I was going. This time around I wanted to figure out where they were and map the route for future reference since I’m hiking The White Mountain 4000 Footer Grid. This requires that I climb Owls Head (and the other 47 x 4000 footers) once in each calendar month of the year. While this is crazy, it’s good fun. I’m also well along with 307 mountains completed of the 576 summits required to finish.

The Black Pond and Brutus Bushwhacks are not without controversy. They’re both unmaintained herd paths that the Forest Service discourages people (mainly people who ask the rangers for advice) from hiking. At one point, anyone with a Guide Card (in other words, professional guides and hike leaders, including Appalachian Mountain Club volunteer leaders) was prohibited from leading a trip that followed these routes or any other route in a Wilderness Area that is more than 500′ from an official trail.  I’m not sure if that is still the case, although I suspect it is. There aren’t any restrictions on regular hikers though.

While the Black Pond and Brutus bushwhacks are not blazed, they’re pretty obvious trails if you know where to start. Although I’d caution you to know how to use a map and compass/GPS when the autumn leaves fall down or there’s snow on the ground because they’ll both make the routes much harder to follow.

For this trip, I started at the Lincoln Woods trailhead and followed the Lincoln Woods trail and the Black Pond Trail the point where it “ends” at the pond. I’d mapped out the routes for both bushwhacks the night before and transferred them to the Gaia App, so I had them handy if needed, and to check whether they are accurate, since you can’t always trust online maps.

Both routes are also available in Caltopo and Guthook’s White Mountains app, although neither is labeled as such. You can also find maps for them in GaiaGPS’s suggested hikes. I also looked up both bushwhacks in AllTrails, which I rarely use. I couldn’t find any maps of either route there, but I did read a lot of reader comments that describe how to find them, so I knew what to look for.

The forecast was quite favorable for this hike and Tenkara fly fishing. There was a 20% chance of showers before 7:00 am followed by partly sunny weather for day 1 and sunny weather for day 2. The temperatures have finally dropped to a tolerable level in the Whites, with 70 degree days and 40-50 degree nights, although the humidity remains quite high. I’ve switched to a hammock shelter and sleep system for the autumn and I was looking forward to camping out that night at a dispersed site somewhere along Lincoln Brook.

The Hike to Owls Head

I get started around 9:00 am and cruised down the Lincoln Woods Trail which is a wide gravel path that was once a logging railroad line. It’s a boring monotonous trail to hike, but it’s the main trunk trail into the Pemigewasset Wilderness and difficult to avoid if you want to hike out to Owls Head, 13 Falls, or the Bonds from the Lincoln Woods Trailhead.

I turned onto the Black Pond Trail and hiked to the pond, where the trail ends. It’d been a long time since I’d hiked this trail and I’d forgotten what it was like. That’s why I don’t mind re-hiking trails in the Whites or climbing all these 4000 footers again. The trails also change from year to year, sometimes quite substantially, due to erosion, floods, avalanches, overuse, etc. so there’s always something novel to see and discover. While I still crave visiting new trails and destinations, I do love the White Mountain trail system and can see myself hiking it for the rest of my days, even if it means repeating hikes every few years.

The Black Pond bushwhack starts at the end of the Black Pond Trail and if you didn’t know that the trail ended at the pond, you might not realize that you’re on the herd path. You literally keep on going straight ahead. While the herd path is not blazed, there’s a distinct tread to follow all the way to the point where it intersects the Lincoln Brook Trail one mile further on. Following that route turned out to be a lot easier than I thought.

Unexpectedly, it had started raining when I’d first turned onto the Black Pond Trail and would continue to do so for the rest of my hike (all day, torrentially). I don’t mind hiking in rain, but I knew that the rainfall would probably dash my fishing plans if it kept up for any length of time. Lincoln Brook is not a big stream and it’s in a very deep valley below Franconia Ridge. That means that the river rises quickly when it rains and increases the force of the downstream current.

I wasn’t too worried about the stream crossings, but about how the rain would affect the trout. If it takes too much energy to fight the current, trout hunker down in their holes and don’t come out to feed.  I had a feeling that the fishing would suck until it stopped raining and the river level dropped back to normal. That can take a day or two, depending on the size of the watershed.

I turned on the Lincoln Brook Trail, which was very wet and muddy, and followed it alongside Lincoln Brook. It’s a gorgeous boulder-filled stream with miles of pocket water..perfect wild trout habitat. The trail is also very level so I was able to make excellent time despite the mud.

I rock hopped a feeder stream that drains Franconia Ridge before coming to the large stream crossing at Lincoln Brook. There was just no way across without getting my feet and shoes wet, so I plowed through the surprisingly warm water. Once across, I had a short rest, a bite to eat, and filtered another liter of water along the riverbank before looking for the Brutus Bushwhack.

The Brutus Bushwhack was created by a peakbagger who had a big black dog named Brutus. Brutus was so big that he couldn’t climb the Owls Head Path, which follows a rocky, loose avalanche slide up the west side of the mountain. The Brutus Bushwhack slabs and switchbacks up the side of Owls Head through the woods instead. It’s quite steep and muddy in places, steep enough that you’d want an ice ax in winter for the descent, but it avoids any rock scrambling. It rejoins the Owls Head Path at about 3400′ at a big boulder and from there you can continue up the path until you run out of trail and reach the summit.

While I had the route of the Brutus Bushwhack on my Smartphone, I couldn’t find the bottom of the path. There was no landmark or cairn marking it. Instead, I saw what looked like a half dozen herd paths headed up the hill (clear signs of overuse by the unwashed hordes.) Rather than investigate all of them, I decided to hike up the avalanche slide instead (along the Owls Head Path) and then try to find the bushwhack on the way down.

I hiked up the trail until I saw two small cairns marking the start of the Owls Head Path. The Forest Services keeps removing them because they’re in a Wilderness Area but hikers just rebuild them. This has been going on for years. They are rather useful though because it’s very easy to walk right by the start of that trail.

I’ve been up and down the avalanche slide on the Owls Head Path on prior trips to Owls Head and it’s never phased me much. People are quite fearful of it and I was a little cautious this time because it was wet and raining when I climbed it. It’s just a narrow rocky scramble that gains about 700′ in 0.4 miles. I took my time and climbed up it at a comfortable pace. There aren’t any crux moves required and the footing was quite good despite the rain.

The steep part of the climb ends at about 3400′ at the big boulder, where the Brutus Bushwhack rejoins the Owls Head Path. I remembered that from a previous visit although I didn’t downclimb it then.

I continued up the path and followed the summit ridge the peak’s high point. There’s a small cairn that marks the spot, but not the cairn that was there when I visited last. It was still raining and there aren’t any views from the summit, so I made my way back down to the big boulder where the bushwhack starts.

I entered the woods and the herd path split into several threads, but I still managed to pick the main trail and follow it. It descends gradually at first, before dropping very steeply, and then switching back in the other direction before intersecting the Lincoln Brook Trail again. The Brutus was much harder to follow than the Black Pond bushwhack because the tread is not at all as clear. At one point, I whipped out my compass to make are I was headed on the right bearing because the path down was not at all obvious.

The bushwhack route ends in a jumble of boulders just past the Lincoln Brook stream crossing. I’d walked right by it previously, but now I know exactly where to find it….next month when I have to climb Owls Head again for my October Grid.

Back at the brook, I filtered another liter of water and ate a Probar, before retracing my steps back to the Trailhead. I’d decided to come back for the fishing another day when the rain had stopped. Now that I know how to get out here quickly via the Black Pond Bushwhack, I think I’ll be spending a lot more time fishing this stream and discovering its mysteries.