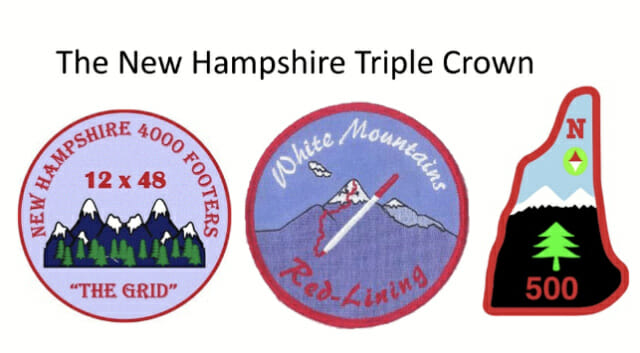 New Hampshire is a great place to hike with thousands of miles of hiking trails and large tracts of wilderness to explore. While a lot of hikers flock to the White Mountain National Forest to climb the 48 four thousand footers and hike the elaborate White Mountain Trail system, there are many more trails and mountains across the state to slake your thirst for new trails and vistas.

Much of New Hampshire’s hiking culture is concentrated on peakbagging and trail lists that hikers complete in order to receive patches or certificates. Here are just a few of the more popular ones: The White Mountains 4000 Footers, The 52 with a View, The Terrifying 25, The Randolph Mountain Club 100, The Trailwrights 72, The Belknap Range Hiker Patch,  and many more.

But the three hardest lists and the ones that subsume most other lists are:

The Grid involves hiking all 48 of the White Mountain 4000 footers in every month of the year, for a total of 576 peaks. You don’t have to hike them all in one year and you can climb multiple peaks in a day. This the most popular of these three lists and so far 105 people have finished it, some multiple times. On average, it takes about 3300 miles of hiking with 1,000,000 feet of elevation gain to complete. Click for “Rules of the Game.”

White Mountains Redlining requires that you hike all of the trails listed in the Appalachian Mountain Club’s White Mountain Guide which lists 652 trails for a combined length of 1471.4 miles, although most people hike closer to 2500 miles to finish it because the trails are not contiguous and repeats are often necessary. So far, 65 people have finished The White Mountains Redlining list including 2 people who’ve done it twice. The Redlining list does include a few trails in Western Maine since the White Mountain National Forest crosses the New Hampshire/Maine state line, so it’s customary to hike the Maine trails too to finish the entire list. Click for “Rules of the Game” and the most up-to-date (version 10) trail list (an excel spreadsheet).

The New Hampshire 500 Highest requires climbing the 500 tallest mountains in New Hampshire which are spread out all over the state, many in the middle of nowhere. Several hundred of these mountains don’t have trails, which makes this a very challenging list, because you have to navigate off-trail to climb them. No one’s counted up the miles required to complete this list yet, but it’s a lot. So far, just 14 people have completed this list, including 2 people who’ve hiked it twice. Click for “Rules of the Game.”

Anyone who completes any one of these lists: The Grid, White Mountains Redlining, or the New Hampshire 500 Highest list is a hardcore hiker. In fact, most of the people who have finished are recognizable names in the New Hampshire hiking community, which numbers in the 10’s of thousands.

There many challenges to overcome in hiking these lists that go well beyond the physical effort required to hike the miles. Winter weather is one of the biggest obstacles to completing The Grid since the wind, cold, and snow depths limit the number of days you can safely climb the White Mountain 4000 footers. The biggest challenge to finishing the Redlining list is finding and traveling to the trailheads for the trails on the list, which are not contiguous and scattered all over New Hampshire. But of these three lists, the NH 500 Highest is probably the hardest to finish, because there aren’t trails to most of the mountain summits. Instead, you have to hike off-trail which is slower, much more strenuous and requires expert map, compass, and GPS navigation skills.

There aren’t any official bodies or organizations that oversee The Grid, White Mountains Redlining, or the NH 500 Highest Lists and you don’t have to prove that you’ve finished them by carrying a satellite messenger or any other such nonsense. Doing so would be impractical because it often takes years to finish any of these lists while balancing family, work, and life commitments.  Also, few people finish without interacting with others who have already completed or are working on a list to offer advice and camaraderie. If you claim you’ve finished, people trust that you have.

There is an unofficial website called 48×12.com that was originally developed to track Grid finishers that has morphed to track finishers of the other lists and distribute hiker patches, however, registration there is completely optional. The truth is, the people who hike these lists don’t do it for the recognition but because they love hiking and hiking throughout New Hampshire and adjacent states.