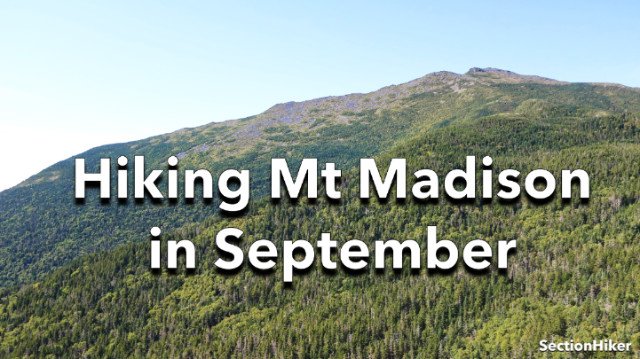 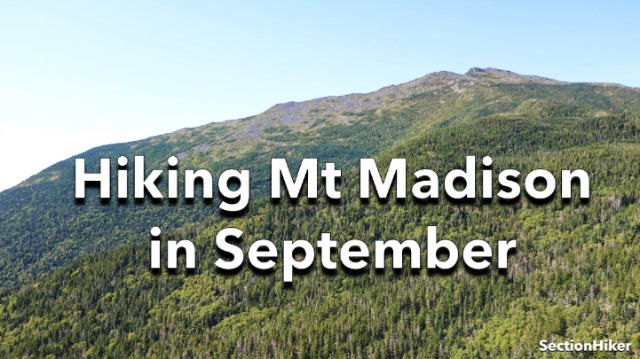 Mt Madison is the fifth highest 4000-footer in the White Mountains, topping off at 5367′. It’s a beautiful mountain to climb and you can follow many different trails to the top. For this hike, I chose one of the less used ones, called the Pine Link Trail, which approaches the mountain from the northeast. It’s a steep climb, gaining over 3500′ of elevation in 3.5 miles before reaching the Watson Path, which runs for 0.3 miles to the summit.

The winds were forecast to be 20-25 mph with gusts as high as 30 mph, sunny weather, and a temperature in the mid-to-high 40’s (F). In other words, pretty moderate autumn conditions, although a big change from the sweltering summer we’ve been having. I packed some warmer layers in case they were needed and wore long pants for a hike, the first time since last spring.

Madison was the last peak I needed to summit to “grid out” September, meaning it would be the 48th separate 4000-footer that I needed to climb for the month for The White Mountains Grid. This is a nutty peakbagging list I’m working on that requires climbing each of the forty-eight 4000-footers in each calendar month of the year (12 months), for a total of 576 summits. While climbing that many 4000-footers isn’t easy, the hard part is doing it in each calendar month, what with the ferocious weather we have in the White Mountains, especially in winter.

I surmise that the Pine Link Trail is less frequented for two reasons. First, the dirt road to the trailhead, called Pinkham Road B, is definitely off the beaten track and most people don’t even know it exists. Then, there’s the issue of maps. People don’t seem to carry paper maps anymore and aren’t aware of the vast network of trails you can take to the summit because they’re not visible all at once on their tiny cell phone screens. Although, even then, I ran into two hikers who didn’t even have cell phone maps on this hike, let alone paper ones, and needed to be directed where to go. You really want a map in hand when you go hiking in the Presidential Range! It’s just too dangerous to not know where you are.

The last time I hiked up the Pine Link trail was a few years ago, so I’d forgotten just how steep it is. It starts with a bang and just never lets up. It’s not some dirt path with switchbacks, but a relentless scramble up a rocky trail, with 1900′ of elevation gain before you even reach the first viewpoint and can get a glimpse of Mt Madison, towering up ahead.

The Pine Trail coincides at the two-mile mark with the Howker Ridge Trail for about 0.3 miles before splitting off again, just below treeline. The Howker is another less used trail, but one you don’t want to miss because it also has some impressive views as it climbs Madison, coming from the north.

Both the Pine Link Trail and the Howker Ridge Trail have “howks” which are small treeless peaklets where you can stop to rest on your journey up Madison, have a bite to eat, and gaze in wonder at the valleys below. I took advantage of them going both ways, up and down.

The Pine Link Trail climbs up to a small lawn at 5000′ on the north side of Madison, just below the summit. I  ran into two people sitting on a rock when I made it to that point and we chatted for a while before I continued to the Watson Trail Junction.

Casual hike conversations in the Whites usually go like this:

“Are you working on any lists?”

I think 99% of the people I meet hiking and chat with are working on some list. That’s not a bad thing because it really binds the hiking community together in terms of a shared experience, at all levels. The hiking community in the White Mountains is just out of this world in terms of size, friendliness, and charity. It’s just a wonderful outdoor mecca in so many ways.

When I got to the Watson Path sign, I stopped to take it all in, before heading up the boulder field toward the Madison summit. Along the way, I ran into a fellow climbing down and picking his way between the boulders. I started a conversation and soon discovered he was a long-ass section hiker (LASH) who thought he was on the Appalachian Trail. But he wasn’t, and he didn’t have a map or a working Smartphone with a navigation app to even know it.

I had him follow me back up to the summit of Madison, which was only 100 feet of elevation gain, where I pointed him in the right direction, going down the Osgood Trail which runs over the summit and then down a long exposed ridge towards Pinkham Notch. We chatted for a while since I was headed in the same direction and we discovered that we shared the same hometown in Pennsylvania, before I sent him on his way. He was quite grateful for the redirect, but I shudder to think what would have become of him if he’d continued on his course when I met him.

I hadn’t spent much time on the Madison summit, so I continued to head back down, turning onto the upper section of the Howker Ridge Trail to get back to the point where it merges with Pine Link Trail again.  I’ve climbed the Howker Ridge Trail at least 4 times previously, but I’d never gone down it ever before….and I never will again. The first 1.2 miles of the descent were a difficult scramble, even for an old goat like me.

I breathed a sigh of relief when I made it to the Pine Link Trail and began my descent. But I ran into another couple at 3500′ that looking for “The Monastery”, which is really just a religiously oriented summer camp located about 4 miles south on an adjacent peak and labeled as such. No map again. No packs and no water. “The directions I got from someone on social media were totally wrong,” they said.

I didn’t voice my suspicion, that the directions were correct, but that they followed the Pine Link Trail, not Pine Mtn Road. Both trails are 180 degrees opposite from one another and their destinations are very clearly marked by signage. What’s a little staggering is that they didn’t realize it until they’d climbed 2000′ in 2 miles (on the way to the fifth highest peak in the Whites) and came across someone to ask.  So I pointed them in the right direction, which was back the way they’d come, and kept heading downhill.

This is the fifth month I’ve gridded out this year and brings me to a total of 465 summits of the 576 required to finish. There’s still a lot of hiking left and most of it is in winter conditions, which is more fun than it sounds. Especially, because there are no bugs!