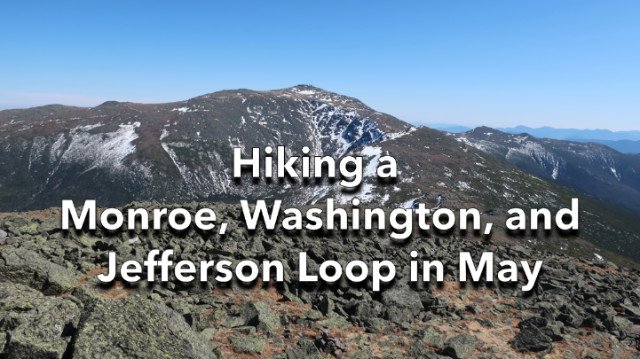 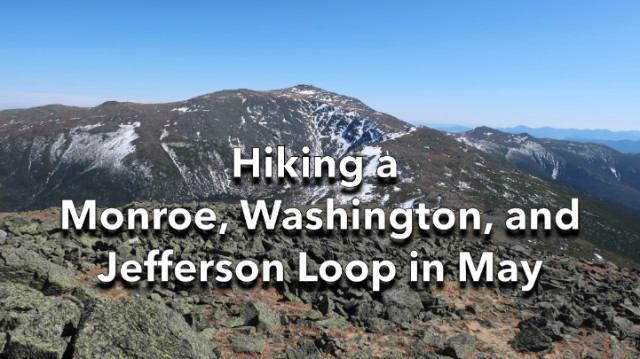 There are two seasons in New Hampshire’s White Mountains: winter and everything else. After six months of winter, a very long winter, I am ready to hike on dirt again. But, this being mid-May, winter is still hanging on above 3000 feet, while the valleys are wet with snowmelt, the rivers are running high and the black flies are breeding.

Which helps to explain the conditions we experienced on this long hike up Mt Monroe, Mt Washington, and Mt Jefferson, which are the 4th, 1st, and 3rd highest of the White Mountain 48 four thousand footers. All of these peaks are adjacent to one another in the Presidential Range and make for a challenging loop hike that’s 11.6 miles long with 5000′ of elevation gain.

Ken and I  met at the hiker lot at Marshield Station, the location of the tourist train called The Cog, which runs up and down the west side of Mt Washington. From there, we headed up the Ammonoosuc Ravine Trail to the Lakes of the Clouds Hut at the foot of Mt Monroe. This is my preferred route up Washington because it’s a lot easier than hiking up the Tuckerman Ravine Trail or the Lion Head Winter Route.

We bare booted to the Gem Pool at the base of the long climb to the hut before switching to Hillsound Trail Crampons, which are aggressive microspikes. The surface underfoot was a combination of ice and wet slush, but it was still cold enough to provide good traction as we climbed. That’s one of the reasons we got an early start on this hike because conditions would be sure to deteriorate as the day warmed.

This trail crosses several waterfalls on the way to the hut but these were easily crossed despite the added snowmelt. But, the trail became difficult to follow as we climbed into the krumholz below the hut because the snow on the normal route was rotten, with voids underneath, and wouldn’t hold our weight. We opted to climb up a frozen watercourse and followed that to the hut instead.

While the hut’s front door was still buried in snow, much of the above-treeline landscape was snow-free. While we had to cross a few short snowfields on the rest of the hike, we were able to bare-boot the entire route from the hut on, with the exception of about 500′ of monorail on the descent at the end of the day.

After a quick food and water break, we climbed up to the summit of Mt Monroe, which is only 350′ above the hut. We bare booted the climb, which only required kicking some steps through a short snowfield. After returning to the hut, we headed up the Crawford Path to Mt Washington.

Again, the Crawford Path was largely snow-free and dry except for a short section near the summit. It was a far cry from just two weeks prior, when Ken, his wife, and I had climbed up Mt Washington in a foot of melting slush. It’s hard to believe how much trail conditions had changed in that short time.

The day warmed as we climbed Washington. We were both wearing shorts, although we were cautious to lather up with sunscreen and sun protective clothing for this hike. I wore sun gloves on my hands, one of the sun shirts I use for fly fishing and OR sun gloves, while gooping Neutrogena 45 on my knees, shins, legs, neck, ears, and face. I’d also had the foresight to carry an extra liter of water with me (3 in total) because I know how hot it can get above treeline when the rocks absorb sunlight. It would reach 85 degrees that day, which is totally unheard of in May.

There were a few tourists milling around the summit of Washington when we got to the top, brought up by the Cog train, but the Mt Washington auto road was still closed so it wasn’t anything like the hordes that visit in summer. There were also a few backcountry skiers who had climbed the peak and were planning to ski down the steep snow-filled ravines that surround Mt Washington and the Northern Presidentials, including the Great Gulf and Tuckerman Ravine. It’s hard to believe that they can control their descent with just metal edges on those steep slopes.

Climbing Monroe and Washington is a pretty significant hike, but adding Jefferson makes it a much harder day due to the added distance and elevation gain. Often we just climb Jefferson by itself, especially in winter. So we set off along the Gulfside Trail towards Jefferson, hiking alongside the Great Gulf and skirting around Mt Clay to the Jefferson/Clay Col. From there’s its another 700′ climb to the summit of Jefferson, past the Sphinx Trail Junction, and up a rocky ediface that always reminds me of the Shield Wall in the book Dune.

This leads to the Monticello Lawn, a grassy expanse, at the foot of the Jefferson summit cone. This, along with the Bigelow Lawn below Mt Washington are my two favorite spots in the White Mountains. I just love looking at the lines of cairns that stretch across the landscape to mark the path.

The climb up Jefferson was pretty straightforward, but I was tiring and we still had to get down. We summited and then about faced, girding ourselves for the climb back of Mt Clay and the Jewell Trail Junction, where we would start our descent. The upper part of the Jewell is a rocky beast of a trail, but once you get down to treeline, it is a very easy and fast trail to descend and we made great time heading down.

But there was one more obstacle to overcome when we reached the Jewell Spur Trail leading to the Cog Station. There’s a final water crossing of the Ammonoosuc River that is usually a benign rock hop at the end of the trail. When we reached it, however, the water was raging with snowmelt and there was no dry way across. The river here is quite high up and close to its source, so it isn’t a wide crossing, but it took us a while to find a halfway decent spot to ford the river. Fords don’t normally phase me that much because I wear mesh trail runners that drain and dry quickly. But on this hike I was wearing waterproof, 200 gram insulated mids which filled with water and held onto it until I could take them off. After that, it took 3 days for them to dry on my boot dryer.

No worries. I was glad that we were able to hike all three of these big boys on one hike and it put a nice end cap on a productive winter hiking season. This was the 10th month that I’ve climbed Monroe, Washington, and Jefferson, and I have a feeling that I’ll miss them after I complete my 12th round for The White Mountains 4000 Footer Grid.