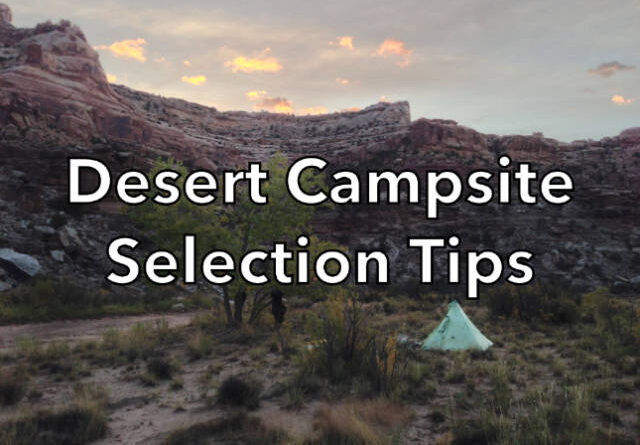 The desert is a place of extreme opposites: blasting heat and freezing cold, parched soil and flash floods, a harsh landscape but one filled with delicate creatures. When planning backpacking trips, it’s important to consider seasonal temperatures, weather patterns, flora, and fauna when deciding what gear to bring and where to camp. There is great beauty in the desert but there are also hidden dangers that you need to be aware of when you make camp.

The desert is beautiful and you should look for campsites where you can appreciate its beauty and vastness, surrounded by canyon walls or with a view of distant mountain ranges. But don’t wait until the sun has passed the rim of the canyon to start looking. Begin the search early so you can note prime spots and return to them if there’s nothing around the next bend.

Most people think of the desert as dry, and it is until it’s not. While you’ll want to choose a dry campsite, you need to avoid terrain that can where a sudden flood can occur. Never, ever, camp in a wash which is a dry creek, stream bed, or gulch, where water has flowed in the past. Flash floods are common in washes following thunderstorms and rain falling many miles away can still find you.

You’ll also want to avoid camping in depressions, on the sand, or on a rock ledge where rain can collect and flood your tent or shelter. Choose an area with a slight slope for drainage and a dry surface such as sand that will absorb water so it won’t pool under you.  If camping on a sandy beach near a river, a popular campsite choice, choose a spot where the sand is not damp. Damp sand can result in condensation inside your shelter.

In the warmer months from May through September, you’ll want to choose a shaded campsite behind a boulder or under some trees to avoid direct sunlight in the early morning in order to stay cool and comfortable. This is especially true if you’re tent is made with DCF, which will heat up like a greenhouse by 7:00 am because it’s the tent walls are so transparent.

During the cooler months from October through April, you’ll want to camp under trees because they provide thermal cover and will usually be warmer than exposed areas. Never camp against a west-facing cliff wall, because you won’t get any sunlight to warm up your tent. It’s incredibly challenging to pack up and get going when you’re cold. And use a compass! I recently guessed which way was east, was wrong, and ended up waiting for the sun for four hours. Don’t be like me.

It can often be very windy in the desert, especially in the spring, so choose a campsite with this in mind when possible. Trees provide natural shelters, as do some boulders. To anticipate wind, stake out shelters really well. See How to Set Up a Tent on Sand which describes how to correctly use rocks as anchors.

Highly impacted sites often attract animals such as mice, chipmunks, raccoons, bears, and ravens.  Sometimes these spots are unavoidable, in which case you should always keep anything resembling food hidden from critters.

In canyon country, gnats come out in April and are pretty heinous through June. Throughout the summer, mosquitos can be quite bad in wetter areas. Horseflies too are often found in hotter areas all summer long. As a general rule, camping near water will put you right in the midst of these bugs. This is sometimes unavoidable, but if you can camp in an exposed or breezy area far from water, you may have fewer bugs to deal with.

When camping in the desert you need to be able to identify and avoid cryptobiotic soil. This black, crusty soil may look inert, but it is very alive. Cryptobiotic soil is an amalgam of inorganic materials such as sand or clay and organic materials such as algae, cyanobacteria, and fungi. It is an important part of many desert ecosystems because it prevents erosion and promotes biodiversity. It is very fragile, especially in drier seasons, so avoid walking or camping on it. Cryptobiotic soil crusts can take anywhere from a few years to many decades to recover. In drier areas, some can take even longer, possibly up to several hundred years.

To select an optimal campsite in canyon country it is a good idea to familiarize yourself with the seasons. In the spring you will probably want to select sites sheltered from the wind. In the summer you will want sites that are shaded and cool and away from buggy areas. In winter you will want warm sites that get sunlight early in the morning. I was going to say to avoid wash bottoms especially in monsoon season, but with climate-change, rain is increasingly difficult to predict, so don’t ever camp in wash bottoms. To recap: you will want to find sites that are dry, temperature regulating, sheltered from wind, away from water sources that could result in condensation, aesthetically appealing, away from buggy areas, and not on cryptobiotic soil crusts.

Ben Kilbourne has been backpacking at least once a month every month for the last twelve years. His explorations have taken him all over the west, but especially the canyon country of the Colorado Plateau. The geography of the west has become familiar to him. He has developed a rudimentary understanding of its geology, and an awareness of the subtle changes in flora and fauna due to soil, elevation, aspect, and precipitation and how these elemental things interact with both ancient and modern humans. His experiences on the land, whether triumphant or thwarted by events either in or out of his control, have provided the foundation for the work he does. Find Ben’s paintings, songs, and essays here http://benkilbourne.com/.