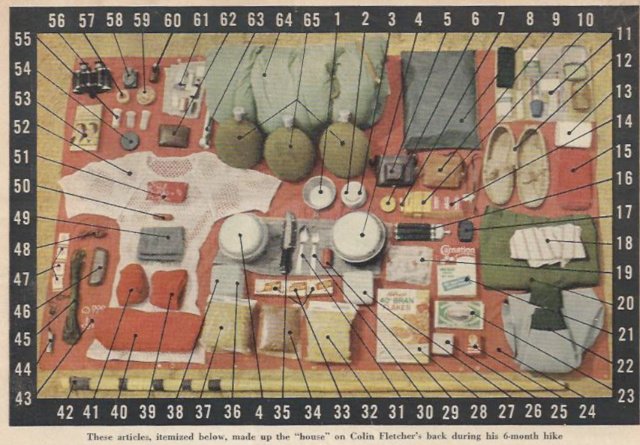 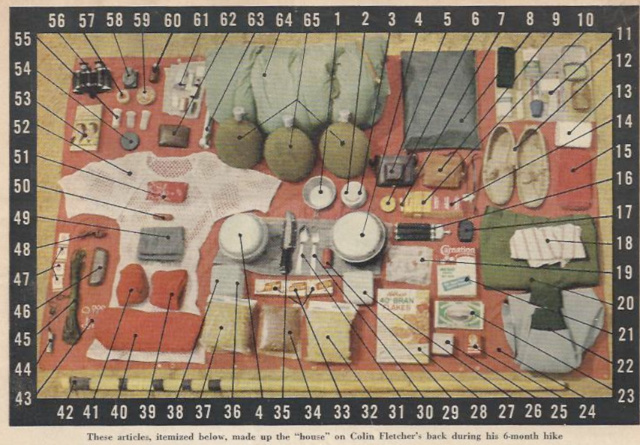 Colin Fletcher is widely recognized as the father of modern backpacking. The co-author of The Complete Walker Volume 4, last published in 2002, he helped popularize the use of gear lists and gear weights to organize and reduce the weight of backpacking gear. The content of that book still influences my backpack gear selections today.

In the summer of 1959, Fletcher walked over 1000 miles through the deserts and mountains of California, from Mexico in the south to Oregon in the north. His journey lasted for 6 months, in which as he writes, “my pack was my house.”

I recently came across Fletcher’s gear list which he published in 1960, in Field and Stream Magazine.  I’ve reproduced it below in two parts: the first part which he used to backpack in hot weather and desert conditions, and the second, a list of equipment that he added when walking across the mountains in colder weather. That journey is chronicled in his book, Thousand Mile Summer.

While Fletcher’s gear list is fun to read through and was remarkable for the time, I thought it’d be amusing to speculate about what his gear list would look like today, with the latest gadgets, clothing, and backpacking equipment available to long-distance hikers. There is quite a contrast between then and now, which I’m sure you’ll appreciate.

When Fletcher drafted his gear lists, the notion of “base gear weight” (gear but no food or consumables) or “skin-out weight” (everything including gear, food, consumables, and the clothes you’re wearing) didn’t exist yet. That said, the following gear list is a pretty good estimate of what we’d now call his base backpacking weight, which includes just his gear, the clothing he carried, and camera equipment, minus food.

The base weight of his hot weather gear totals 569 oz or 35.6 pounds. This is a perfectly respectable pack weight, considering that he was carrying an early down mummy sleeping bag that weighed 90 ounces (5 lbs 10 oz) and a modified external frame backpack that weighed 67 ounces (4 lbs 3 oz) but could haul up to 80 pounds. Fletcher kept his gear weight down by cowboy camping without a tent or sleeping pad during the first part of his journey, finding soft places to sleep on, by sleeping naked, and only using his extra clothing for ground insulation when required.

Fletched would hike for about a week at a time, carrying approximately 10 pounds of food between resupplies at small stores or post offices, where he’d forwarded food. He used water purification tablets, probably iodine to treat his water, and pre-cached water in several desert locations. In addition, he had the ability to carry up to 1.5 gallons of water at a time in three half-gallon aluminum canteens, since this was before the age of soft water bottles or trail angels.

Like any good backpacker, Fletcher only carried what he needed through the desert and then added additional gear to his pack when he had to hike in cooler weather at higher elevations in the mountains. In addition to heavier clothing, Fletcher liked to catch trout to augment his diet. He also used a white gas stove in the mountains, instead of burning sagebrush, because it was less of a hassle to use and much more reliable to cook with. White gas was available at the stores he resupplied at in those days, although I doubt it is today. The total weight of his additional cold weather/mountain gear (see below) comes to just over 10 pounds.

If Colin Fletcher were to hike his Thousand Mile Summer Route over today in 2022, what would his gear list look like and how much would it weigh?

Here’s a stab at a modern gear list for him that replaces his:

These changes cut his gear weight in half and illustrate how much has changed in terms of backpacking gear and photography between 1960 and 2022, some 60 years later.

Additional substitutions can also be made for the gear he carried on the mountainous/higher altitude portion of his journey with the inclusion of a freestanding tent, lighter weight clothing, and a much simpler and lighter weight fishing setup. These would have dropped his gear weight from 10.4 pounds down to 5.8 pounds, which is also respectable, considering the added comfort and convenience that these modern items would have provided.

This was a fun exercise that illustrates Colin Fletcher’s ingenuity in 1960 as well as the benefit of more modern gear for long-distance adventures. If you’ve never read any of Colin Fletcher’s trail memoirs, I’d encourage you to give Thousand Mile Summer, a try, since Fletcher was a gifted writer.  The Man Who Walked Through Time (Kindle, Audible, Paperback, Hardcover) is another one of my favorites, one that I reread every few years because it is so good.