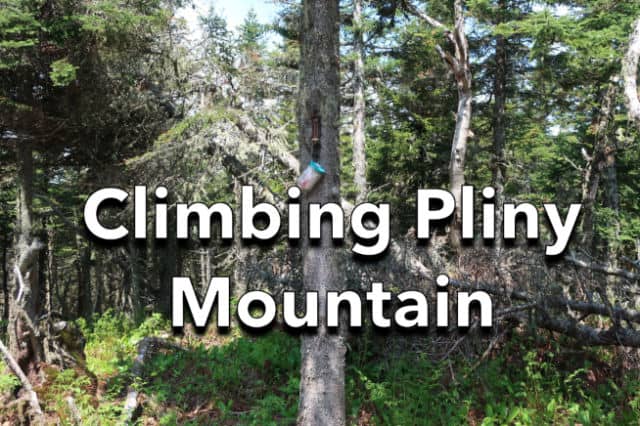 Pliny Mountain is a 3605′ mountain close to Mt Waumbek, a 4000 footer in the Pliny Range of the White Mountain National Forest which includes Mt Starr King and the three Weeks, North, Middle, and South. It’s considered a trailless peak but can still be accessed, at least partway, by the abandoned Priscilla Brook Trail which runs to height of land between Waumbek and Pliny. From there, it’s a bushwhack to the Pliny summit. Incidentally, Waumbek was originally named Pliny Major.

There are many abandoned trails in the White Mountain National Forest, some that are still hiked quite regularly, some which are unofficially maintained, and some which are long forgotten and have been reabsorbed by the forest. For example, the FireWardens Trail on Mt Hale, the Downs Brook Slide Trail on Mt Passaconaway (also referred to as the Passaconaway Slide Trail), the Skull Cairn Trail on Mt Chocorua, the Osseo Trail to Mt Whaleback, the Mt Bemis Trail to Mt Bemis, and the Wildcat Brook Trail to Wildcat E (links to trips reports where I’ve hiked them).

Some of us even collect old White Mountain Guides and maps so we can locate these trails and visit them. My 1972 edition of the White Mountain Guide lists the Priscilla Brook Trail and notes that it will be abandoned. The 1963 edition does not mention it but does describe the Keenen Brook Trail which follows the same route on the included map. Keenen Brook is also mentioned in the 1952 edition, but not as a trail, leading one to believe that the brook was renamed sometime between 1952 and 1963. Even earlier than that, the same route was named the Upper Ammoosuc Trail, as shown on the 1915-1945 USGS map, where it runs to Bog Dam, south of York Pond and the Berlin Fish Hatchery. The fact that remnants of the  Priscilla Brook Trail can be found close to 75 years later is an example of how hard it is to retire a trail, even a lightly used one, once it has been established.

Today, Mt Pliny is on the NH500 Highest List which I am methodically climbing peak by peak. It’s a fun but challenging peakbagging lists to climb because many of the mountains don’t have trails and they’re widely dispersed across the entire state. It’s a lot like geocaching I suppose, but with a lot more strenuous hiking involved.

Finding the Priscilla Brook Trail trailhead is easy if you load the “Historic Topo 1930” in GaiaGPS. There’s space for 2 cars at its bottom. It’s completely unmarked, unsigned, and unblazed but the trail, which is an old logging road, is easy to follow without a GPS or compass since the brook runs alongside it. There are blowdowns, mud, and encroaching vegetation to walk around and push through, but nothing significant. The trail is clearly used still, although I suspect mostly by wildlife judging by the tracks. I saw animal tracks made by moose, bear, and the elusive Vibram.

I followed the trail up to 2500′ to an open area that looks like it was an old logging camp, judging by the logging paraphernalia scattered around.  There were pieces of an old stove, old metal buckets, gas cans, and a barrel strap. These are all considered archeological artifacts and cannot be removed by law since its still part of the White Mountain National Forest.

The Priscilla Brook Trail becomes much harder to hike above 2500′ though. There are numerous blowdowns, rocks with ankle-twisting voids between them, and mud. I kept it up until about 2800′ when I saw a skidder track heading toward the summit and got off to follow it. It led to another skidder track which started to climb to Pliny’s west ridge. When it petered out, I kept going, climbing up and towards the ridge through a light understory of rotting trees, fern, and hobblebush. This continued all the way to the summit area and the highpoint was easy to find.

The summit canister is an old jar with a logbook inside. I signed in and chugged a liter of water. There weren’t any views, so I started my descent. I thought about retracing my steps but decided it would be worth trying to avoid as much of the upper portion of the Priscilla Brook Trail as possible, above the logging camp. I succeeded in doing that, descending on a fairly open line through an understory of hobblebush. From the logging camp down, I just had to follow the Priscilla Brook Trail down and avoid as much of the mud as I could.