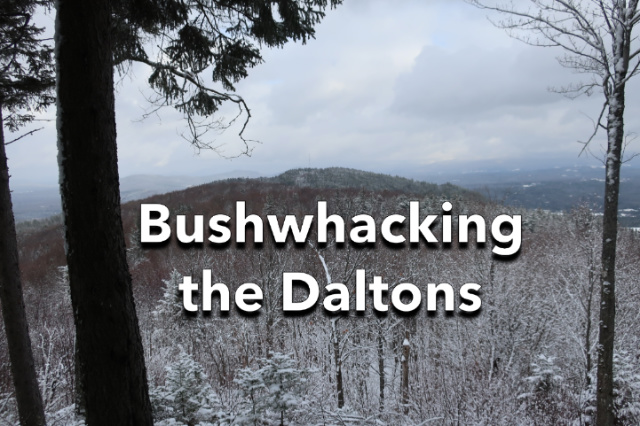 Dalton Mountain is located north of Littleton, NH, quite close to the New Hampshire and Vermont Border. It has two summits on the NH500 list: Dalton Mountain NE and Dalton Mountain, the main peak, about 1.2 miles to the south.  My friend Ken and I bushwhacked both in about 4″ of powdery snow in an area that had been logged previously, so we were able to serendipitously follow many logging cuts through the forest, which made the hiking a little easier.

We started our hike off a gated ATV road called Rooney Road, in the hills above Dalton, NH. Never heard of Dalton? Google Maps hasn’t either, although there is a small store, a church, and a public library off Rt 135 in the town center.

The drive to Rooney Rd had been an adventure. We drove up to Littleton on an icy morning and followed Rt 135 into the hill country, getting off on Blakslee Rd, a steep, snow and ice-covered gravel road, which we followed to Rooney Rd. There wasn’t any good place to park there, so we drove down Big Hill Rd until we found a small lot next to an open snowmobile gate and left our cars there. You never know exactly where you’ll be able to leave a vehicle when hiking a trailless peak, so it pays to be prepared with a shovel to carve a space out of a snowbank and a friend to help push you out of a ditch if need be.

We hiked back up to Rooney Rd and passed through a gate in between two mobile homes, perched on the hillside. There was snow underfoot, and below it, the ground was wet and saturated from a giant thaw that we’d had a few days earlier.

The first peak, NE Dalton, was an easy one to climb because there’s a logging road that branches off Rooney Road and runs to a radio transmitter and dish near the summit. The summit area is just past the transmitter and we circled around looking for the logbook to sign-in. No joy, though. We couldn’t find one amidst the spruce trees and snow.

We hiked back down to Rooney Road and into the col between NE Dalton and the main peak, looking for an easy way through the spruce jungle that separated the two. There wasn’t any obvious way across, so we hiked into a mess of snow-covered spruce and thorny raspberry bushes that dumped snow down our backs and tore at our clothing. Before long we found a logging road that was headed in our direction, although it was still full of young birches and thorny shrubs. Still, we could see the hardwoods on the other side of the col and knew that we’d soon be back into more open woods.

When we’d be planning this hike, we’d checked the topographic maps that NH Fish & Game publishes. These maps have a lot of detail that’s missing from other map sources, including the location of conservation areas, which are open for anyone to hike through. Knowing where you can hike and where you can’t because it’s posted “No Trespassing”, is one of the biggest challenges for off-trail hikers in New Hampshire. In order to keep the peaks accessible, it’s important to obey the wishes of local landowners and avoid areas where hikers are not wanted.

Ken had some beta that indicated that the north side was posted and off-limits to hikers, so we tried to stick to the south side of the ridge as we made our way to the main summit. We didn’t see any signage denying access though, but would have backed off to the south if it was required.

We encountered many logging and skidder tracks in the forest and followed them whenever possible because they were more open than the surrounding forest and easier to walk along. Navigation was easy because we were following a ridgeline, although we had to climb up and down over several “bumps” along the ridge on the way to the main summit.

Once we arrived, we proceeded to look for the summit canister, but again came away empty-handed. There was quite a lot of pink surveyors tape on the summit though and we suspect that the land-owner may have removed the canister with its logbook to keep people off the property.

We ate a quick lunch and retraced our steps, quite literally, following our tracks in the snow, back the way we’d come. With one exception. We found a logging road that looked like it headed in our direction, before heading east again to hook back up with Rooney Rd. Only this time we crossed the col much lower down the previously, and avoided the dense spruce and raspberry bushes on our way over to the main summit. Once back on Rooney Rd, we hiked back out to Big Hill Rd and back to our cars.