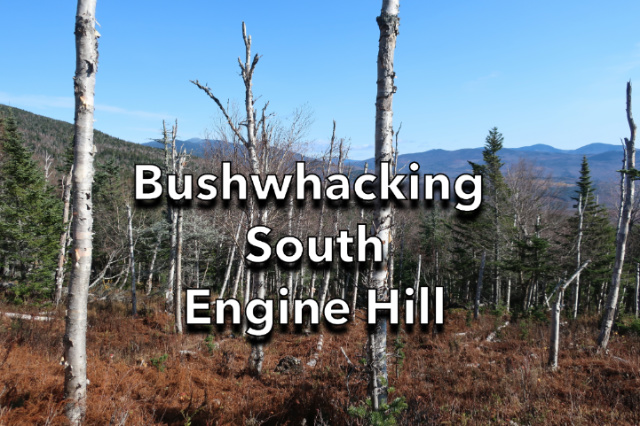 South Engine Hill (3244′) is a trail-less mountain on the New Hampshire 200 highest list that’s located off the Rocky Branch Trail outside of Jackson, NH. Climbing it requires hiking up the Rocky Branch Trail from Rt 16, a distance of 2.6 miles with 1800′ of elevation gain before you bushwhack south about a half-mile into the woods to find the summit.

There was no one on the trail the morning when I started out. I’d dressed too warmly and I shed layers as I climbed toward height of land, which is the geographic term we use in New Hampshire to describe the highest point between two watersheds or the point in a landscape where you can’t go any higher and you have to start going downhill.

My plan for bushwhacking to the South Engine Hill summit was to hike to the height of land and then navigate south to the summit along the dotted line in the map shown above. As I approached the height of land from below, I noticed that the woods to the east of the Rocky Branch Trail were quite “open”, which is the term we use to describe woods that are easy to walk through, without a lot of vegetation in the way. Instead of hiking all the way up to the height of land, I broke east below it to take advantage of the open terrain.

That turned out to be the right call because the east side of the ridge is covered with open birch glades which were easy to hike through. It being late October, the leaves had dropped, which made it much easier to see where I was going. The thick fern understory had also died back which made walking easier. The ground was still wet from our recent rains and the cold wind whipped through the woods, but the sun lit up the birch glades making for a pleasant and cheerful hike.

Solo bushwhacking is a game of nerves, that I enjoy, but dread at the same time. Hiking by yourself on trails is far different because there’s usually little doubt about your route. But that security net disappears when you step off-trail and hike cross country relying on a compass and a map. In the absence of a trail, you need to pick your way across rough or uneven ground, climb over fallen trees, bash your way through dense brush, and create a route that hopefully minimizes the amount of effort required to reach your destination. It’s a very different game, one that uses a part of your brain that can go to sleep when you follow a blazed trail.

My destination was the second hill marked on my topographic map, after the one I was standing on. I set my compass so I’d stay on the right bearing and then followed the contour (at a set elevation), all the while staying high to avoid dropping down the slope. People have a tendency to drop downhill when they walk around a hill and I wanted to counter that. I also have a barometric altimeter on my watch that I’d set at the trailhead to keep me honest. An altimeter is a great navigation tool. It’s surprising more people don’t use them.

Given the change of season (leaves on the ground), there was little evidence that anyone had followed the route I was taking, until I’d nearly reached the summit and came across some faint trails leading to the canister. It’s customary to find a PVC pipe or a glass or plastic jar tied to a tree near the top of a trail-less peak, that contains a logbook with the names and dates of people who’ve climbed it before. Not all mountains have them, but many do. It’s all part of the game.

It took me a little while to find the canister because the top of the mountain is on a plateau without a clear high point. I wasn’t even sure that there would be a canister up there. But once I opened it up, I recorded my hike in the logbook and perused the other recent entries. The last entry up there before me was from a month previous, and the one a few days before that was from my friend Bill.

His entry reads: “Found all the shit woods from HOL (height of land) on RB (Rocky Branch) East. Now to find some views? And better woods on the return!”

I would have experienced the same thing if I’d started from the height of land myself.

My route back to the Rocky Branch was considerably faster than the hike to the summit because I didn’t need a compass bearing to stay on track. I could see (North) Engine Hill and Carter Dome in the distance and kept them to my right on the way back to the Rocky Branch Trail. From there it was an easy hike down to the trailhead and a quick drive home.