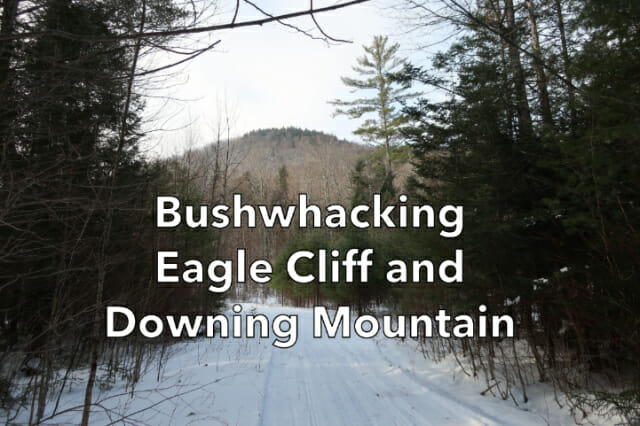 Eagle Cliff and Downing Mountain are two New Hampshire 500 Highest peaks located near Stinson Lake outside of Rumney, NH. They’re in a section of the White Mountain National Forest that doesn’t have many maintained trails, so they’re seldom visited. Snowmobiling is popular in this area, however, and there is a well developed and maintained trail network that hikers and mountain bikers can access if they wish to explore the area. Since these two peaks are largely within the National Forest, there aren’t any public access issues, provided you respect the homeowners and property owners abutting the area.

We started this hike at the easternmost point of Stinson Lake Rd, at the barrier that is set up in winter to limit access to snowmobiles. There’s space for a few cars to park here on Forest Road #172 (snowmobile #155). I believe you can follow this forest road all the way to West Campton, making it a convenient access point to the area. I’ll have to try driving up next spring when it’s not closed to vehicular traffic.

We followed #172 and three snowmobile trails almost all the way to the summit of Eagle Cliff Mountain, sometimes referred to as Eagle Cliff West to distinguish it from Eagle Cliff, another trail-less peak in Franconia Notch. This was a little unexpected. We knew about the first snowmobile trail (called the Quick Lunch Trail) which runs in between Downing and Eagle Cliff, but not the second or the third which climbs to a scenic viewpoint on Eagle Cliff’s southwest flank. We suspect that the last one is new and was constructed within the last year. We followed it to height-of land-and then climbed up the ridgeline a short distance to the Eagle Cliff summit. That was almost too easy.

From the summit, we backtracked back to the snowmobile trail and followed it back to the east ridge of Downing Mountain, which we’d passed on the way in. This climb was a little bit more challenging because the east slope was a boulder field covered in snow. We picked our way through it, wearing snowshoes, drifting east to avoid the higher ledges.

Downing is capped with a long, narrow, and rocky ridge. I climbed up to it on the peak’s east side and started making my way down the ridge toward the summit. Ken had some beta about there being a red-blazed trail on Downing, but we never saw it.

The summit ridge was fairly open woods-wise although I had to bypass a few rocky outcroppings. When I came to the peak’s highpoint, I quickly found the canister, although it would have been easy to walk right past it as the jar was transparent and not covered in blaze orange tape.

I signed us in and we ate a snack before retracing our steps the ways we’d climbed up. By now, the sun was out and the day had warmed up, turning the snow in the boulder field to mashed potatoes. We slipped and slid down the hill back to the snowmobile trails and then hoofed it back to our cars. Another two NH500 peaks in the can and several hundred left to go.