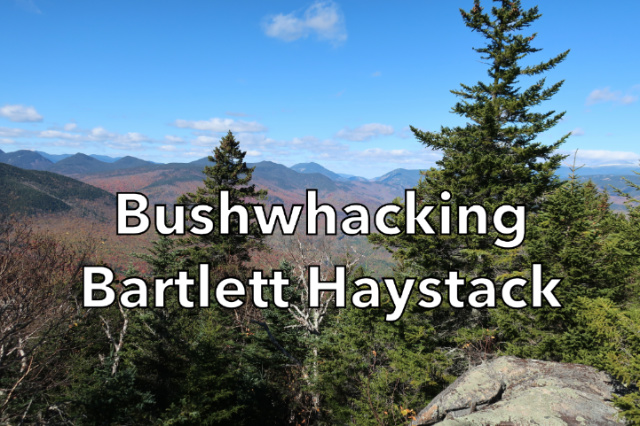 I’ve had Bartlett Haystack Mountain on my radar for a few years, but never made the time to go climb it. It’s a trail-less peak off Bear Notch Rd, which is closed in winter, usually from November thru May or June. With Autumn in full swing and fishing season over and the trails crowded with leaf peepers, I decided a bushwhack would give me some exercise as well as solitude.

I haven’t done much bushwhacking in recent years because I’ve been focused on Redlining a second round. But I’ve been on a few off-trail adventures recently with friends that have rekindled my interest and I’m seriously considering finishing the NH200 highest (currently at 78% completed) and possibly going after the NH500 highest as well (34% completed). I don’t get all Ga-Ga about hiking lists, but they do give you a goal to shoot for and a community to be a part of. There’s also a lot of adventure lurking on the NH500 list, something that I miss after Redlining for the past 6 years on hiking trails, even if some of those trails are quite obscure.

Bushwhacking takes the unknown to a whole different level though, since there are no guidebooks and few trip reports written about different routes. You may have noticed that I’m rather vague when it comes to sharing my bushwhacking routes with people and that’s on purpose. If you want to climb these peaks, you need to do your own planning homework.

The term “Haystack” is frequently used when naming mountains that have a pointed haystack shape. Bushwhacking these is easier because you know where you have to go..up until you can’t go up anymore…without a lot of compass navigation. There’s frequently a fly in the ointment, however, such as a ring of cliffs as you approach the summit, which can make a straight shot approach problematic.

For this hike, I decided to approach the peak from USFS Road 44.3 off Bear Notch Rd. I knew from past experience that the woods were open on this side of the mountain. I’d climbed the Northeastern Peak of Bartlett Haystack a few years ago from this direction, with a navigation class I’d led with Beth Zimmer (a NH500 finisher), for the Appalachian Mountain Club. I suspect that most people approach Bartlett Haystack from the south along an old logging road/trail that leaves from Bear Notch Road and climbs partway up the mountain, but I wanted to do something a little different.

I parked at the junction of USFS 44.3 and Bear Notch Road and entered the woods. This area is the furthest extent of the Bartlett Experimental Forest and managed by the USFS for forest research. There are a few small streams in the Experimental Forest worth exploring and a portion of the area is licensed by Bear Notch XC in winter. The network of gravel roads that runs through the forest is also a good place to go mountain biking.

I quickly found an old woods road and followed it for a while, gaining elevation, but it headed further west than I wanted. When it petered out, I contoured back toward the northeast so I could pick up the eastern ridge leading to the summit where the elevation gradient was a little gentler. The south side of the mountain is quite steep, which you can tell from the tightly bunched topographic lines, and I wanted to avoid that side.

Climbing up the east side was pretty open up to 2600′. From here I encountered rock ledges and bands of spruce which I had to weave my way through to gain additional elevation. It really wasn’t too bad. The summit area is fairly open and I quickly found the summit canister, a piece of PVC pipe painted red and white nailed to a tree. These canisters usually contain a notebook and pencil, where people can sign the name, the date, and leave a short note. The most recent entry before me was two weeks earlier.

Beyond the summit, there are two rock ledges that have expansive views. I could see Mt Washington, Crawford Notch, and Carrigan Notch from them which was an unexpected treat. It was wicked cold and windy at the summit though, so I soon headed back down.

I tried to retrace the route I’d climbed the peak on, but I couldn’t find it any landmarks that looked familiar. I took a bearing but got thrown off it when I encountered the cliff band again. It looked totally different. I kept getting cliffed out (no way to proceed down without falling off a cliff)  and I had to backtrack back uphill a few times to find openings where I could get down.

My goal has been to hike back down the ridge I’d climbed, but the terrain channeled me to its east side toward a streambed which I wanted to avoid. I kept trying to angle away from the draw but ended up contouring hard across the ridge to get to a more southeasterly bearing. Once I was back down under 2000′ the woods opened up again and it was easy to head down to the forest road I’d parked on, which I used as a backstop. I came out of the woods about 100 yards from my car and headed home.

This bushwhack was just what the doctor ordered. It’d taken me under 3 hours to do a leisurely paced trip and it was very rewarding to do a solo bushwhack again. My ankle (sprained several months ago) still hasn’t fully recovered, but I think these off-trail hikes are actually good for it, as recuperation therapy to build up my leg strength again. I expect I’ll be doing a lot more bushwhack in the coming months.