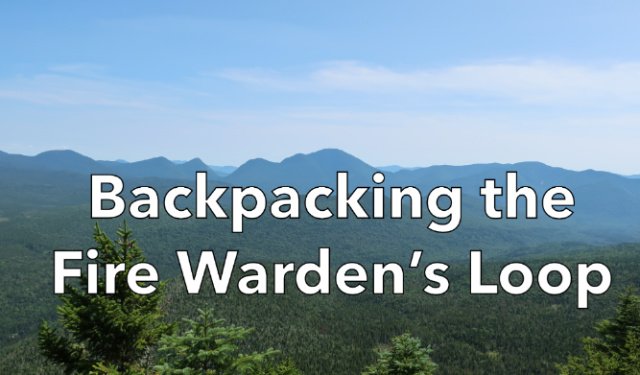 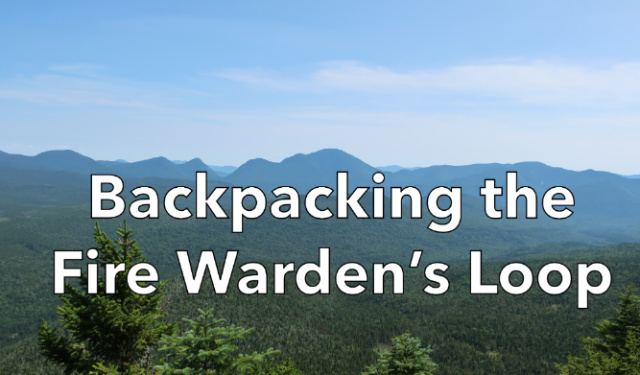 The first trip plan I published in my Free Online Guidebook, Backpacking the White Mountain 4000 Footers is called the Fire Warden’s Loop, and climbs Mts Hale, Zealand, South Twin, and North Twin Mountains, with an optional extension out to Mts Guyot, West Bond, Bond, and Bondcliff. It begins and ends along the North Twin Trail, making it a convenient loop for solo backpackers because you can hike it without having to arrange for a shuttle.

The Fire Warden’s Loop is named after the Fire Warden’s Trail, which is an “abandoned” trail, no longer maintained by the Forest Service, that climbs the west side of Mt Hale, beginning in the Little River Drainage. While it’s been abandoned, it’s still unofficially maintained by volunteers and hiked by people who know about it, although it’s usually left off printed maps of the White Mountain Trail System. It’s perfectly legal to use since it lies completely in the White Mountain National Forest.

It’s had been a few years since I climbed the Fire Warden’s Trail and hiked this trip plan, but I wanted to check it out to see if any revisions were required, as well as bagging some more peaks for my White Mountains 4000 Grid. So when the latest heat dome exited the region, I set off for a two-day backpacking trip. I knew that the weather was going to be great, but it really exceeded expectations with daytime temperatures in the mid-seventies and nighttime temperatures in the mid-forties. Not bad for mid-August.

My original plan had been to do a simple circuit, up Hale, then over to Zealand, and down South and North Twin, stealth camping somewhere off-trail north along the Twinway, north of Mt Guyot. But a water source I’d planned on, Zeacliff Pond turned out to be kind of nasty and low. I could have gotten water out of it by wading through the swampy crap along its shores, leeches and all. Instead, I decided to hike to the Guyot Shelter, a few miles farther along to get water from the spring there. Once I was out at the Guyot Shelter adjacent to West Bond, Mt Bond, and Bondcliff, it made sense to spend the night and to climb the Bonds the next morning. From my perspective, this was just the icing on the cake on a fabulous trip, even if it wasn’t anticipated.

I got on the trail by 8:00 and hiked the easy first mile up to a bootleg trail that leads to the foot of the Fire Warden’s Trail. Many people continue past that point to bypass the first two water crossings when climbing North Twin Mountain directly.

I’ve been spending a lot of time this summer fishing the Little River, which runs alongside the North Twin Trail. The water in that river is really cold and makes a great home for the native brook trout.

The Fire Warden’s Trail hasn’t really changed since I last climbed it and is still as beautiful as ever. I wonder why they closed it in 1972. While it climbs steadily to the summit of Hale, it’s not a precipitous climb, so you can maintain a pretty steady pace up to the summit.

When I reached the summit of Hale, there were two large groups there, holding food out in their open hands and outstretched arms. This was to entice grey jays to land on their hands so they could get photographs. I find that kind of thing mildly nauseating, so I beat feet down the Lend-a-hand Trail. I am a curmudgeon. Just leave the wildlife alone.

The Lend-a-Hand Trail leads from Hale to Zealand Hut and I’d forgotten how steep of a grade it has. It’s a lovely trail, however, without much traffic. On the way down, I took note of South Hale, which is on the NH 100 highest list. It was one of the first bushwhack hikes I was ever on, on the first day of calendar winter some time ago. I must go back sometime.

I popped down to the Zealand Falls Hut and had a bite to eat from my food bag on the outdoor porch. There were a lot of day hikers and thru-hikers passing through and it was fun to people-watch for a while. The AMC has installed outdoor faucets with potable water so you don’t have to come indoors to refill anymore, as a COVID precaution. I filled up a water bottle and then headed out to climb the Twinway up to Zeacliff, intending to refill again at Zeacliff Pond.

The climb from the hut to Zeacliff is rocky and straight up. It’s been rerouted a bit since I last climbed it and there are a lot more rock stairs than before, but it’s still a pretty agonizing ascent climbing about 1300′ in 1.1 miles. I don’t mind the elevation gain as much as I do climbing rock stairs, which seems to fatigue my leg muscles much faster than rocks, roots, and dirt that are naturally shaped and graded. Maybe that’s just my imagination.

I made it up to Zeacliff, which is a fabulous viewpoint at the top of the climb and had a drink of water, chatting with a couple that had just climbed the Zeacliff Trail, which is also super steep. The view of Carrigan Notch and the Desolation area from here is always worth the trip.

It was a short walk to Zeacliff Pond over level trail and boardwalk. But when I arrived at the pond, it was quite low and would have required wading through muckety-muck to get to the water. I’m wearing leather boots this summer instead of trail runners because of some foot issues and the thought of getting them wet was unappealing. I thought about my options for a bit and decided to continue hiking with the water I had left to the Guyot Shelter, a few miles distant. I hadn’t planned on going out that way, but it was really the only option, instead, of turning around.

I followed the Twinnway top the Zealand Mountain Spur Trail, taking a brief detour to bag the summit before continuing to the Bondcliff Trail which runs out to Mt Guyot, my favorite peak in the Whites. This 4600′ bald mountain is pretty close to the center of the Pemigewasset Wilderness. I just feel like I’m at the top of the world whenever I climb to its summit cairn.

From Guyot, I hiked down to the Guyot Shelter and got 5L of water, from the spring which was running surprisingly slow. The campsite was packed, which is normal in summer, so I climbed back up to the ridge and camped at one of the overflow sites, just below treeline. I’d camped in this exact same spot three weeks earlier when I climbed the Bonds for July. I set up my hammock, which was my shelter on this trip, ate a quick dinner, and fell asleep before sunset. I’m really digging this Wanderlust Hammock System from Hammock Gear. I sleep so well in it. I never realized how much more comfortable I’d be in an 11′ hammock.

The next morning I hiked out to West Bond, Mt Bond, and Bondcliff before hiking back over Bond to reclimb Guyot. I took a rest there and chatted with David, a hiker I met, who was backpacking in the Whites for the first time. It turns out he’d picked his route after reading through the trip plans in Backpacking the White Mountain 4000 footers. It’s gratifying to me that people use that resource. Publishing it for free on my website instead of accepting a book contract was one of my best decisions.

I took off, but David stayed to eat the blueberries on Guyot. He caught up to me later though and we walked to South Twin together, chatting all the way. This section of the trail is quite pretty. It’s just below treeline so the sunlight filters in between the trees as you walk along boardwalks.  It then climbs about 500′ steeply to the summit of South Twin, a huge mountain with a fine viewpoint.

David and I hung out on the South Twin summit for a while soaking in the rays and chatting with other hikers before we parted ways and I headed toward North Twin, the last peak on my route.

North Twin is about a mile from South Twin and connected by a muddy trail before climbing a cliff to an open viewpoint. When I arrived, there were two guys sitting in REI trail chairs, eating a brick of hard cheese without a care in the world. They were just starting a multi-day backpacking trip and were taking a much-needed break after climbing the three thousand feet to North Twin on the North Twin Trail.

I sat down and chatted with them for a while and answered some questions they had about the Fire Warden’s Trail, which they planned to hike back down to the North Twin Trailhead. It wasn’t listed on any of their paper maps and they didn’t understand why. They also wanted to know when they should arrive at the Guyot shelter to guarantee that they got a spot on the platform…and the answer is 4:00 pm in summer.

I left them and headed down the North Twin Trail back to the trailhead. Hiking down that trail is a bit of a slog, since it’s so steep and rocky. As I descended, I recalled the first time I’d been down the trail in the winter of 2009. Then, we’d glissaded on our butts using our ice axes to brake our speed. That was a good time.

I crossed the third stream crossing on the Little River, without incident, and with dry boots, before following the bootleg down the west side of the river (for research purposes) which avoids the first two stream crossings. I’d never hiked it before in its entirety and wanted to see how well defined it is. It is very easy to follow all the way back to the main trail and from there to the car park.

This was a great one-night trip, in fantastic weather. I met some great people along the way and had a great workout hiking some 22 miles with 8,000+ feet of elevation gain. I just love hiking to beautiful places that you can only walk to. I doubt that I’ll ever get sick of that. Onward and by all means.