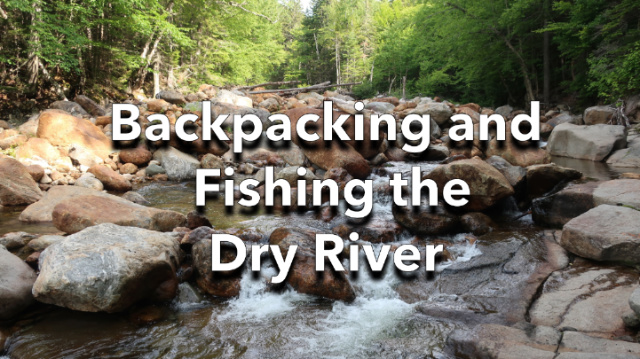 The Dry River is one of the wildest parts of the White Mountain National Forest, located below Mt Washington in the Presidential Range-Dry River Wilderness Area. The most direct way to access it is by following the Dry River Trail, which runs alongside the river and detours up and down the many landslides that scar the river valley’s sides. Since this trail is in a nationally designated Wilderness Area, it is not blazed at all, it has minimal signage, and is not maintained to the same standard as more popular or accessible trails. It’s also sparsely used in comparison to other areas of the National Forest, so it has solitude in abundance, which is why I find myself drawn back to it time and again.

While I have fished the Dry River in the past, I’ve never taken a trip where it was my primary goal and I felt free to spend all day fishing along its boulder-strewn banks. So I loaded up my Tenkara Fly Fishing Gear and my hammock and headed up river, pausing frequently to work my way down to the river banks to fish the more accessible pools and runs for brook trout.

I don’t know why the Dry River is named the way it is, because it always has water, even when the rest of the rivers in the Whites are running low. This is despite the fact that the Dry River Valley is fairly narrow and doesn’t have a large watershed, compared to much larger rivers like the Saco or the Swift. I’ve always assumed that the water “comes” from Mt Washington, either from springs or precipitation, since “George” is located just beyond the Oakes Gulf Headwall at the top of the Dry River Valley.

My plan on this trip was to hike up to the Mt Eisenhower Trail trail junction (5.2 miles w/ 1550′ elevation gain) on day 1, taking my time. The last time I’d hiked up the Dry River Trail and fished the river, was about 2 years ago, when I fished the pools and pour overs below this junction and camped streamside. That had been in September, so late in the season, and I’d used dry flies to catch and release the smaller brook trout that live high up the river, close to its source.

I’ve been fishing dry flies for close to a month on other White Mountain rivers, so that’s largely what I brought on this trip. These are tied with thread and animal hair, including elk or moose, so they float on the surface of the water like a moth that’s landed on the surface and can’t take off because its wings are wet. They’re really easy to tie and you don’t have to go out of your way to make them look like any specific bug, because the trout aren’t choosy…especially New Hampshire trout.

I got an early start and headed up the trail, passing the Wilderness boundary and climbing up and around the landslides that have obliterated the old trail. The sides of the Dry River valley are slowly eroding and dumping their debris into the river bed, which resembles a giant boulder garden full of pour-overs, pools, and runs. Fishing the river requires a lot of scrambling from place to place and isn’t a casual cast-and-wait type of affair.

As I hiked up the trail, I burst out laughing at some of the detours that the trail takes around and through these landslides, if only because they were detours around the detours that I encountered the last time I’d been up the trail two years earlier. The Dry River “Trail,” in quotes, is not for the faint of heart or for anyone afraid of heights, for the matter, as there are some sketchy-sketchy bypasses of landslides that travel right across loose debris fields, hundreds of feet above the river bed.

I dropped down to the river several times to fish tantalizing stretches of trout water and while I was getting dozens of hits, I didn’t land many brook trout. Every river is different, so I started changing my tactics trying to figure out how to increase my success rate. For example, I rotated through the different flies I’d brought trying to see if the fish had a preference for one type over another. Then I switched to smaller flies because I suspected the trout might be too small (as in young) to swallow my flies. Nothing made much of a difference.

My success rate improved when I got up to the Mt Eisenhower Trail junction where the river is much smaller and less powerful, but that could have also been a time of day effect since trout like to feed in the late afternoon better than at midday. I fished for about an hour here and had much better luck while scrambling along the banks to get to smaller pools and looking for a good campsite to hang my hammock.

I didn’t find anything I really liked on the river, so I hiked uphill a nearby a USFS-designated campsite that I’ve camped at before that is located just above the Isolation West Trail junction. It’d been expanded since I was there last (from overuse), but I found a secluded spot with a good breeze and a view of Crawford Notch for the night. I set up my hammock, cooked dinner, hung my bear bag, and called it a day. I was the only person there that night.

After breakfast the next morning, I packed up and headed out determined to give the river another chance. The morning was overcast, which was good because the river rocks heat up in strong sunlight and fish tend to be more active in cloudy weather. As I hiked, I found it much easier to find places where I could get down to the water to try fishing than on the previous day.

Rather than drops or pools, I focused on getting down to sections that had a long run after a shallow drop.  There would be several of these in a row, 100 yards or more long, making it easy to go from one to the next. I also put on a much longer tippet (going from 2-3 ft to 6 ft), the nearly invisible line connecting the high visibility backer to the hook so I could let the fly drift more.

Those changes worked well and I was soon catching a few trout in each run before moving to the next one upstream. I still had a few battles, where one fish would repeatedly hit the fly and spit it out before I could set the hook, but I’d just move to a different spot on the river and then come back later and try some more. Fishing with barbless hooks is a lot more difficult because you lose more fish, but it doesn’t maim the fish in the process.

Fishing with a very long tippet is a little tricky because it’s harder to judge where the fly is, in terms of water depth. While I was fishing surface flies which should have floated all of the time, they did sink when they got wet enough, so I could fish them below the surface in deeper water to catch the attention of bigger trout when I could see them. Polarized sunglasses make it much easier to see what’s lurking in shallow water so you know where the fish are.

I use a high visibility Tenkara line when I fish, which is attached to a transparent one (a tippet), which is tied to a fly (a simulated bug with a hook in the middle). The tippet is designed to break if you catch a heavy sea monster, so you’re rod doesn’t break, but it is also hard for fish to see, so the bug at the end looks more realistic.

The connection between the Tenkara Line and the tippet is a big knot that you can see when you’re fishing, and which helps you estimate the depth of the tippet and fly. So in addition to fishing the surface, where fish breach the water to bite a fly, I was fishing the water column in order to get the larger trout hovering in deeper sections.

All these changes resulted in a much higher catch rate and I deemed my trip to fish the Dry River a success. There’s no guarantee that this approach work the next time I visit the Dry River, but that’s part of the challenge. There’s a section of the river not readily accessible by trail that I want to still explore and fish so a follow-up trip is in the cards. There are easily a half-dozen rivers like the Dry River within a 30-minute drive from my place in the White Mountains National Forest, but I’m now hooked on the Dry River and expect to return soon.