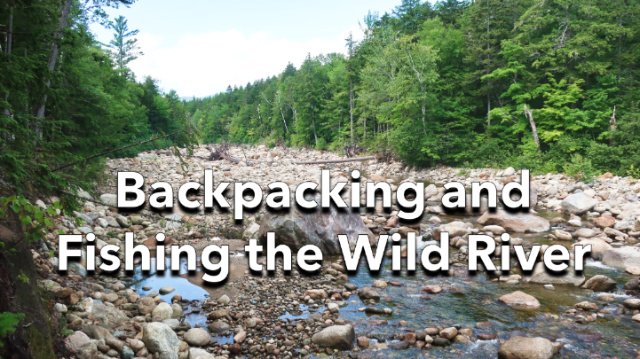 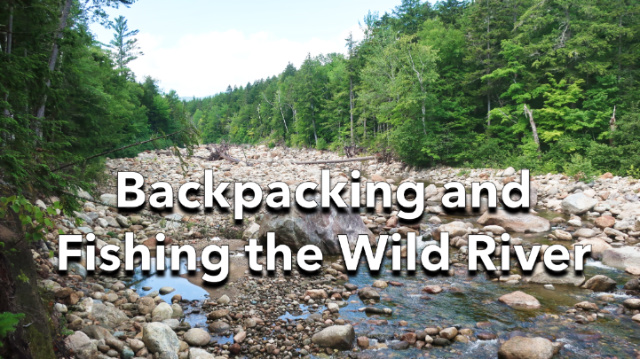 The Wild River Wilderness is the wildest designated wilderness area in the White Mountain National Forest spanning New Hampshire and Maine. I hadn’t been up that way for a few years so I planned a backpacking route that followed the river from the Wild River Campground to its source at No Ketchum Pond at the foot of Carter Dome Mountain with the intention of Tenkara fishing along the river’s upstream boulder gardens and cascades.

As I pulled into the hiker parking lot next to the campground, I remembered the first backpacking trip I ever took in the White Mountains some 15 years ago. We’d dropped cars at this lot and then shuttled to the Rattle River Trail outside Gorham, which is on the AT. From there we’d traversed the Mt Moriah and Carter Range, descending the Black Angel Trail before crossing the Wild River over the bridge at the Moriah Brook trail junction. That bridge has since been wiped out by the massive floods that accompanied Hurricane Irene (in 2011, I believe) and the only way across the upper part of the river now is to ford it.

The evidence of Irene’s passage is still evident along the Wild River watershed with massive erosion damage along the banks and many of the trails. While I’ve hiked extensively in the region for many years, I’m still in awe of the damage caused by that storm. Giant boulders the size of houses litter the stream bed while huge piles of dead trees, swept aside by the maelstrom, rot along the river sides. While you can observe all this from trails that run high above the river, it’s an even more impressive sight standing down along the riverbank with a fishing rod in hand.

While my goal on this trip was to fish the Wild River, I had to hike upstream first to Perkins Notch, some 8 miles south to its source, which would give me the opportunity to do a little fishing along the way and scope out some of the wilder sections. This included two side streams, Spruce Brook and Red Brook, which drain the Carter Mountain Range and feed into the Wild. I didn’t have any firm plans about where I would camp although I planned to give the designated tent site at Perkins Notch a looksie to see if was any more appealing than the last time I’d camped there with Guthook and my friend Steve many years ago. Back then the water source had been pretty sketchy and the site heavily used, but it is so remote, that there was a chance that it had recovered or been upgraded.

Being in a wilderness area, the Wild River Trail gets significantly less maintenance than the more heavily used White Mountain trails to the south and west. While the trail junctions are signed, there are no blazes, and some of the less frequented sections are heavily overgrown. I’d dressed in anticipation of this with long pants and a long sleeve hiking shirt because I knew I’d want extra protection against the shrubbery and bugs, as well as sun protection while fishing the river.

I passed by the campground and headed upstream following the Wild River Trail up an old logging road to the Black Angel Trail junction and river crossing, stopping occasionally to fish some cascades and runs in the river that were easy to get down to. I caught some smaller brookies and got a lot of hits, but nothing like the action I’d had during the previous two weeks in the Pemigewasset Wilderness or the Dry River Wilderness Areas.

The Wild River was running really low, because of this year’s drought, although that seems to have become an annual occurrence during the past few years. I like to tell my friends that Tenkrara fly fishing is drought-proof, which it is to a certain extent because it’s ideal for fishing pocket water and boulder gardens which would be difficult to fish if you had a reel and a floating line to contend with.

I crossed the Wild River at the Black Angel Ford by rock hopping, which was unexpected because it’s often a knee to mid-thigh ford. The area around the ford used to be a popular campsite, and while there are a few flat spots still for tents, it looks like the forest service has been felling trees to make it harder to find an open space to camp. There’s a perfectly good campsite, the Spruce Brook Campsite, a short distance upstream with an excellent swimming hole out front which is a better place to camp anyway.

I continued heading south crossing Red Brook and after that the Eagle Link Trail Junction which runs up to the Baldfaces in Evans Notch. From here until the East Branch Trail junction, the Wild River Trail is pretty overgrown. with sections bordered by shoulder-height bushes that have overgrown the trail, so you can’t see your feet when you pass through them. It’s the same story with the bog bridges further along, which are covered by long grass: you really don’t want to fall off them into the swamp below. Part of me enjoys these sections even though they verge on bushwhacks. They’re a gentle reminder of the relentless power of nature over man’s works!

I crossed the Wild River again at the East Branch Junction, where the river is about 15′ wide and barely qualifies as a stream. The water at this end was stained red, from the tannins in the soil and vegetation.

The Perkins Notch Tent site was 0.6 miles farther along and it has changed since I was last there, but not really for the better. There are two new earthen tent pads and at least a dozen pre-existing sites scattered around them. There’s also an “eating area” which looks like it’s been the site of bonfires, with downed trees scattered around it ready for burning. I went to scope out the water source I remembered south of the tent site, but it was now a puddle.

I checked my Far Out Guide app for the Whites which lists water sources and the map showed a seasonal spring 0.3 miles farther along the trail. There was a trickle of water available there, but you’d need a sponge to get it. So I backtracked to an unsigned herd path I’d seen 0.6 miles back (down the trail) that was heading to the “pond”, which is a big swampy area with open water in the middle. No Ketchum Pond, as it is named, usually covers much more area when it has water in it.

That herd path was pretty muddy and obviously human-made because people had lain sticks over the muddy area, a common thing in New England, to keep you from sinking into the mud. I hadn’t been sure when I started down it and didn’t want to meet a moose coming down to meet me! The path led through swampy vegetation and grass, ending at a patch of solid ground, which was just sun-dried mud.

I got water out of the pond by wading into it and sinking into the muddy bottom, scooping undisturbed water (without suspended solids), with my cook pot, and pouring it into a 2L soft reservoir I carry. I filtered a liter of the red tannic water and stowed it as backup for the 1/2 liter I had in another bottle. I guess this is the closest reliable water source to the tent site now. There’s another better one 0.3 of a mile down the trail (0.6 from the tent site) that is a small stream, which is the outflow of No Ketchem Pond. The Far Out app has this stream, but not the herd path to the “pond”.

I decided to skip camping at the Perkin Notch Tent site, which was too beat to hell for my taste, and headed back to a pre-existing tent site I’d passed about 1 mile north. It wasn’t exactly flat, but nothing a 4″ inflatable air mattress couldn’t paper over. I pitched my tent, made dinner, and read for a while until I fell asleep to the sound of the river trickling a few feet from my tent.

I slept a little late the next morning, but still managed to break camp by 8:00. Until now, my goal had been to identify that point where the river was big enough and had enough overhead clearance to fish, without my line and rod getting caught in the trees. That turned to be close to Red Brook, which I fished a while before following it down to the Wild River. The confluence of the rivers was a nice cascade that held some big brookies. The water there was a deep red.

This point on the Wild River was finally the perfect size for some proper stream fishing. It was running low but there were still plenty of pour overs, cascades, and runs to fish. I was fishing an elk hair caddis fly that I’d tied myself which looks a lot like a white moth when it floats on the surface of the water. The river depth was never more than three feet with many rocks exposed, making it easy to move from pocket to pocket in search of trout. More water would have been nice, but I was still enthralled by the beauty of the scene.

I think this is the first trip into the Wild River Wilderness where I spent as much time off-trail as on-trail. That’s the nature of small stream fishing. There’s a lot of bushwhacking along the banks of rivers, sloshing in the water, and hopping from rock to rock to get to the best trout habitat. Making your own “trail” is very different than following another that someone has laid out before you.

I’m no stranger to bushwhacking. But like trails, most of our bushwhacks are goal-oriented with the sole purpose of climbing a peak to check a list. While fishing catch and release on these small streams is a game like peakbagging, you have much less power to influence the outcome by sheer force of will. If the fish aren’t plentiful, it helps to relax and soak in the beauty of the place instead.

I worked my way down the Wild River until close to Spruce Brook without so much as a hit, before once again catching brookies as I worked my way up Spruce Brook. I think the Wild River, in addition to low flow, was just too warm for the fish to be very active. That would explain why the side streams held more trout – they were probably just colder.

Undeterred, I continued working my way down the Wild River to the Black Angel ford and crossed the river again, hoping to catch one more fish on the river before the day ended. But that didn’t happen. So I soaked in the scenery and was content with that. I’ll just have to come back in the autumn when it’s colder and there’s more water.

I’ve found that I enjoy breaking rivers or streams down into smaller parts that I can explore in depth. There’s much more to the Wild River and its feeder streams that I didn’t get to experience on this trip, but this was a satisfying foray and just the beginning of a deeper relationship with this mighty and wild river.