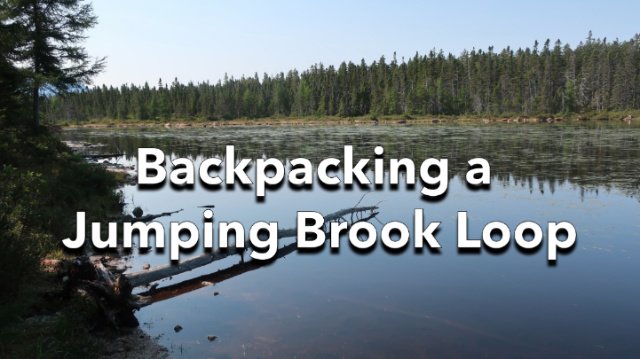 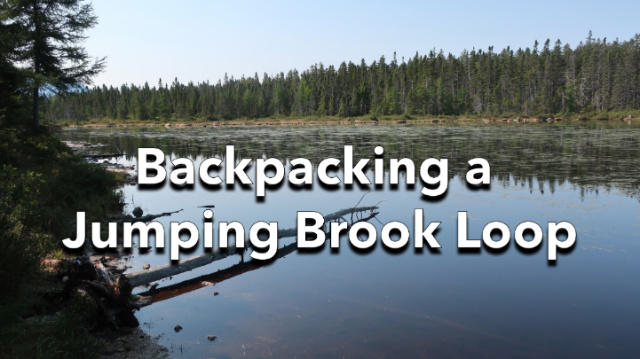 Jumping Brook is a mountain stream that’s pretty close to the geographic center of the Pemigewasset Wilderness. It drains the western slope of Mts Guyot, Zealand, and the Bonds, before it meets the North Fork of the Pemigewasset River. The closest trail is the Thoreau Falls Trail. If you venture out there, it’d be a miracle if you run into anyone else with the same destination in mind.

Would you believe it? I did. I was standing on the Thoreau Falls Trail checking my location on GaiaGPS and trying to decide the best route to the confluence of Jumping Brook and the North Fork. I was close, but I knew I’d have to bushwhack to get to the exact point. When I felt something furry brush up against my leg and a saw a flash of white! I must have jumped 4 feet in the air.

It was Paxton, who looks like a poodle sheepdog cross, and Jim, a crusty old hiker who was out looking for Camp 23 (an old logging camp) and a memorial plaque to two Dartmouth professors whose airplane had crashed nearby. (Chris Dailey has a good trip report about his explorations out here.) Neither of those really interested me, but we teamed up to find the confluence of Jumping Brook and the North Fork, which was their destination too.

I’d backpacked to get to this spot that morning, climbing up the Kedron Flume Trail (not the easiest ascent) from Crawford Notch, then following a section of the Appalachian Trail, and then hiking south along the top of Thoreau Falls.  Once across, there’s a little rock scramble to get to the southern portion of the Thoreau Falls Trail that requires jumping onto a boulder over a stream of water rushing over the falls. You don’t want to miss that crux move or you could easily plunge over 50′ to the rocky gorge below. It’s a wonder more people don’t die there, but then again the trail isn’t well marked, so most people probably don’t realize the trail continues south for another 4 miles.

It’d been about 5 or 6 years since I’d hiked this portion of the Thoreau Falls Trail and I really didn’t remember a thing (I’d hiked the lower section earlier in the summer to Bushwhack South Shoal Pond Peak.) But I’ve had an urge to start hiking all the 653 trails in the White Mountain Guide again (formerly called White Mountains Redlining) and wanted to hike a 1-night loop that would offer some solitude, good fly fishing fishing, and to make some headway on the trail list.

I also have this multi-year project that I started last year called “blue-lining” which involves (Tenkara) fly fishing the blue lines on the map that correspond to remote streams and brooks, both along trails and off. The White Mountain National Forest was created to preserve the purity of the rivers and streams of the region, so combining hiking and Tenkara fly fishing is a natural combination. Tenkara is a form of fly fishing done with an ultralight telescoping rod, a line, a fly, and no reel which makes it very easy to transport by backpack.

Only this year, the Pemi is running really low due to a terrible drought. Normally, I avoid fishing rivers the size of the East Branch with a Tenkara Rod, because you simply don’t have the reach required. I fish with a 12′ rod, with a 12′ line, and a 3-6′ tippet which makes for an intimate fishing experience that is best suited for medium-to-small streams and brooks, but not rivers. But with the low water, the East Branch is fishing a lot like a small stream with easy access to fantastic fish habitat. Water levels usually increase in October, so I wanted to get out to the East Branch one last time before hurricane season starts up (mid-September) and the water level goes up again.

Jim, Paxton, and I came to the point on the trail closest to the Jumping Brook confluence and headed off-trail to bushwhack up to it. This required an easy but thigh-deep ford although Paxton managed to cross on top of the river rocks with ease: the advantage of having four legs instead of two.

The confluence of the two streams was very different than I’d remembered it, but I wasn’t surprised because big rain events and erosion are continuously reshaping the White Mountain’s landscape. There’s a nice pool where the two streams merge, which is always a good place to fish for trout. The turbulence oxygenates the water which trout like and the concentration of nutrients is higher so they tend to cluster there.

I caught my first brook trout in less than a minute and caught ten more in the space of 20 minutes without having to move more than 20 yards. I’m a catch and release fisherman, especially since New Hampshire brookies are on the small side, but if I had to supplement my backpacking meals with trout like Colin Fletcher, I really could.

When my “hit” rate tapered off, I decided to pack it up and head south again to the East Branch to fish it and then find a place to camp for the night. I had a campsite I’d used before in mind, but it all depended on how much headway I made hiking and what the fishing was like along the way. In other words, I had a pretty loose itinerary.

I bushwhacked back to the Thoreau Falls Trail and headed south, fording the East Branch at the old Thoreau Falls Bridge site, which has been recently removed. The old bridge was a long tree with railings that spanned the river. The river is very narrow and shallow here, so it’s an easy ford now except in high water. Being in a Wilderness Area, the bridge dismantlers couldn’t drive the remains of the old bridge out (powered tools and vehicles are prohibited), so they cut it into sections and left segments of it on the south side, arranged into a Stonehenge-like circle. It’s a strange sight.

After crossing, I turned onto the Wilderness Trail and headed upstream in the direction of Mt Carrigain on a section of trail that I hadn’t hiked in a long time. I used to avoid hiking the same trails twice, but I’ve found that I forget them after about 6 years, so the novelty is never lost! That said, I did remember elements of the landscape from previous trips and experienced a sense of relief in the process.

But backpacking with a fly rod is a very different experience than hiking without one because you notice a lot of things that you wouldn’t otherwise notice, like:

It’s a heightened state of situational awareness that’s quite immersive not unlike bushwhacking (hiking off-trail).

The desire to fish for trout is harder to put into words and it’s a more encompassing hobby than you might imagine, with a body of knowledge and many activities that occur before you even get to the water. Catching fish, or trying to, is a small part of the action really. Yes, there’s an electric connection that occurs when you hold a live trout in your hands, but that’s gone in a moment. The real satisfaction comes when you have more good days than bad ones.

I stopped a few times as I headed upstream, bushwhacking out to the river to fish spots that looked like they’d hold trout. This section of the river has a noticeable gradient with falls, rapids, and pools in abundance. The fishing proved good and I continued to land a lot of brookies.

That is until I took a fall on a boulder along the side of the river and tore up my shin. It was a shallow wound but it generated a lot of blood. I scrubbed it out with an alcohol pad, which smarted. I tried to staunch the blood flow with some toilet paper and then gave up and slapped a big Hydroseal bandage over it which is still attached to my leg. These bandages can stay on for up to a week. They’re really good for treating hiking blisters but can be used for any type of wound care.  I carry a bunch in my first aid kit. I’ve written more about Hydroseal Bandages here.

By then, the day was waning, and I started to think about finding a campsite since sunset was around 7:00 pm. The days are getting shorter fast.  As I neared Stillwater Junction, I came across a faint herd path leading to a campsite where I’ve camped before. I pitched my tent and then headed down to the Carrigain Branch (another stream) to filter water and cook up a hearty dinner.

I was famished. I ate my dinner, cleaned up, and hit the hay shortly after sunset. Sleeping a long time is one of my favorite parts of backpacking. Physical exhaustion makes a great sleep aid.

It was surprisingly cold the next morning and I wished I’d packed a warmer insulated jacket instead of just a fleece hoodie. I cooked up a hot breakfast and took a turn along the Carrigain Branch with my rod, but the trout were still sleeping. I broke camp, packed, and was soon following the Shoal Pond Trail back north to the Appalachian Trail and back out to Crawford Notch.

The Shoal Pond Trail has a real wilderness feel to it and that may be an understatement. It’s perfectly safe to hike and it’s pretty easy to follow, but it is heavily overgrown and muddy as hell. It has a distinct, powerful smell, that’s pervasive like aftershave, but biological in nature from all the rotting biomass along its flanks.

I put the legs back on my convertible pants for this section of the hike, which borders on bushwhacking. I also started calling out “Hello Mr. Moosey” and clicking my poles together to ward away any of the moose or bears that were undoubtedly watching my passage with amusement.

I also noticed something that I’d never noticed before on this trail as I hiked north: Shoal Pond Brook has the look of a good trout stream. The water is very low now but the brook is full of boulders and rapids and drops which would make good trout habitat if the water level was higher. This was the first time I’d hiked this trail from the south to the north, which may explain why I’ve never noticed its trout potential, but it probably deserves a return visit next year to find out.

It took two hours, but I made it back to the Ethan Pond Trail (the AT) and hiked back toward Crawford Notch, staying on the AT to the Ripley Falls trailhead. I walked down the road to the Notch and then headed up the West Side Trail which parallels Rt 302 back to my car at the Willey Visitors Center.

This was a short trip, but I still managed to cover a lot of ground in pursuit of bagging trails and trout. Most of my year until now has been taking up with Gridding the 4000-footers and there’s been less time to backpack, which I miss. I only have one more peak to climb this month for the Grid and hope to use the extra time to get out on some more “blue lining” trips before summer ends and the autumn peakbagging season resumes.