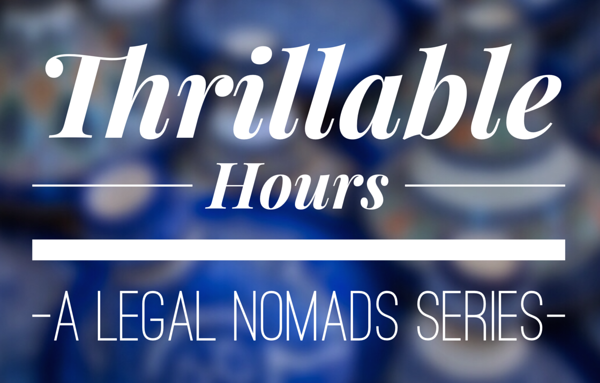 Welcome back to Thrillable Hours, my interview series about alternative jobs for lawyers.

I have been sitting on this and other Thrillable Hours interviews during my recovery, and I am excited to get back to them. I have received emails from quite a few readers who were concerned that I might abandon my “life after law” series given my limited time at the computer.  Not the plan! My life as a former lawyer is a big part of how I got to where I am today. I want to keep providing these short interviews occasionally for law students and lawyers looking to shift their careers.

Prior to working as the Executive Director for the Museum of Food and Drink (MOFAD) in Williamsburg, Brooklyn, Peter J. Kim was an attorney at the large (650 lawyer) firm Debevoise & Plimpton LLP in New York. As with Nathan Sawaya, the lawyer-turned-LEGO-master, Peter’s life after law interview came about through a Legal Nomads reader. Brita, who worked with Peter at Debevoise, connected us in early August 2017. Peter’s answers came back just about when life went a bit pear shaped, so I’m only getting to post them now.

As you can imagine, the MOFAD message of “Food Is Culture” is one I can get behind. The museum is built to be interactive, with exhibits that explore the mystery and joy of food. It’s a new kind of interactive museum, and like Cité du Vin in Bordeaux, France, it brings the world of food to life with multi-sensory exhibits that you can touch, taste, and smell.

If you’re visiting New York, I highly recommend it.

What made you decide to follow a less conventional path than typical law school graduates? Was there a particular moment that catalyzed the decision for you?

As a junior associate at Debevoise, I enjoyed my work, but I always knew that a long career in biglaw was not in the cards.

I resolved to always make time for two personal passions: food and music.

On the food side of things, I enrolled in a weekend certificate program at the French Culinary Institute (now the International Culinary Center). I ran a supper club out of my apartment and attended as many events in the culinary world as possible.

On the music side of things, I studied flamenco guitar, and was always watching shows and meeting other musicians. Everything I did [outside my main job] tied to one of those two things.

Gone were the days when being social meant standing around and drinking beer. I didn’t know what any of this would lead to, but it helped me consider other potential career paths.

Then, I got invited to a lunch held by a food writer and inventor named Dave Arnold. He announced his vision to create the Museum of Food and Drink (MOFAD). I was captivated. On a lark, I reached out, and MOFAD became my pro bono legal client.

Over time, I realized that the museum really needed a director to get this idea off the ground. One year later, I made my rounds at Debevoise and announced that I was leaving the firm to be the founding director of a food museum.

I got a lot of puzzled responses.

What do you find most fulfilling about your current job?

First, the people. My team is amazing. It’s inspiring to work with talented people who are passionate about the museum’s mission. I also have the great fortune of working with the world’s top chefs, writers, scholars, and food producers. I get to talk about flavor science, cheese production, the history of Chinese takeout, and the wonders of the digestive system. How cool is that?

Peter with some of our supporters and advisors at the 2018 MOFAD Spring Gala. (c)Naveen Thomas

Second, it’s the feeling of building something.

It has been exhilarating to see the project grow from a handful of people in a basement office, to a mobile museum, to a brick-and-mortar space in Brooklyn.

Each step along the way, I see MOFAD’s community grow and take shape.

Do you have any advice for professionals who are interested in leaving conventional private practice in North America but concerned about what life after law looks like?

I would recommend exploring your options while you have the safety (and paycheck) of a steady job.

I also recommend saving as much money as possible.

Often, there is an inverse correlation between things you want to do and things you can afford to do.

In my case, I started building MOFAD on a volunteer basis, which meant that I lived off my savings for about a year. This wouldn’t have been possible if I hadn’t squirreled away money.

How did your legal education inform the way you see the world today? Do you still identify yourself as a lawyer?

My legal education has proven invaluable. My most important duty as the museum’s director is to be its most enthusiastic and persuasive oral advocate. Every day, I have to make a case for this museum, whether it’s to a donor, a visitor, or a potential partner.

What do you have to say to those who tell me lawyers can’t have fun?

Oi, lawyer stereotypes are so… hackneyed. I’d push up my glasses, straighten my pocket protector and say, “Hey, first of all, the world would be a lot less fun without a legal system to make it all possible. So there.”

Then I’d get back to working on the exploding breakfast cereal gun exhibit at the museum.