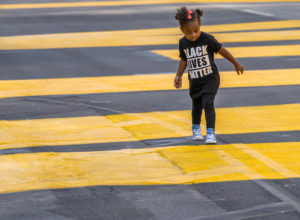 In a 2008 column that went viral, the late journalist Fatimah Ali predicted that only the election of Barack Obama would save our country from a full-on “race war.” She was wrong. Obama’s two terms of service have long passed, but the racial injustices in this country are raging in full force. This spring alone, in the context of public health and economic crises that disproportionately ravaged Black and Brown communities, we’ve witnessed the systematic and blatant disregard for Black lives over and over again — George Floyd, Ahmaud Arbery, Breonna Taylor, Christian Cooper. Communities of color and their allies are tired, weary, angry, and impatient for change. Photos of peaceful protesters speak to our hearts, while burning cars, boarded buildings, law enforcement officers in riot gear, and state-mandated curfews tell the story of a nation at war. Company CEOs, university presidents, national sports figures, and the general public are responding to the countrywide unrest and are watching closely.

Our youngest generation is watching, too.

In these painful times, when the structural racism and inequality of American society is so palpable, many parents are asking two critical questions. Most immediately, “How and how much should we discuss these recent racial traumas with our children?” More importantly “How do we teach this generation about what it means to be White, Black, or any other racial or ethnic group in ways that help dismantle, rather than perpetuate, the systemic racial injustices and inequalities that appear to be so intractable?” The answer to both questions is the same.

As researchers with expertise in parenting among ethnic-racial minority families, we advocate an approach to racial discussions with children that is intentional, honest, and focused on equity and justice for all people. We call it “intentional parenting for equity and justice” (IPEJ). It entails deliberate and purposeful conversations and activities that increase children’s awareness of racial dynamics in our country and impel them to resist and change those dynamics, which most notably include institutionalized racism and oppression; racial stereotyping, microaggressions and their consequences; and the damaging effects of racial privilege on those who are excluded. IPEJ also involves identifying opportunities to expose children to the strengths and rich cultural traditions of all cultural and ethnic groups, including their positive contributions to all aspects of our society.

To achieve IPEJ as a normative approach to parenting, we need to shift the status quo. Currently, many well-meaning adults avoid mentioning race to their children, choosing instead to uphold colorblind and egalitarian national narratives. This is especially true of White parents. Studies following the killings of Trayvon Martin (2012) and Michael Brown (2014) showed that these highly visible events motivated Black parents to have extensive conversations about racism and discrimination with their children. But very few White parents did so, citing their wish to maintain a protected, worry-free childhood environment. Our research shows that on a more routine basis, Black, Latinx and Asian parents are far more likely than White parents to talk about racial issues with their children, especially cultural pride and awareness of discrimination.

‘Intentional Parenting for Equity and Justice’ entails deliberate and purposeful conversations and activities that increase children’s awareness of racial dynamics in our country and impel them to resist and change those dynamics, which most notably include institutionalized racism and oppression; racial stereotyping, microaggressions and their consequences; and the damaging effects of racial privilege on those who are excluded.

The status quo hinders racial progress. To strongly position future generations to dismantle systems of racial injustice, inequality, and privilege, parents must deliberately teach children that they exist, that they are complex, and that they are unacceptable.

Too many teens in our studies – teens of all racial backgrounds – say that racism is a thing of the past that ended when Rosa Parks sat at the front of the bus, even though they notice current racial disparities in the way people live, the opportunities they have, and the way people are treated in public places and by authorities. Children are learning race even when parents are not deliberately teaching it, and they are drawing conclusions that do not include the damage caused by persistent structural issues. In addition, when parents fail to sensitize children to racial bias, stereotyping, and their harmful effects, these racial dynamics persist uncontested.

In our studies, racial teasing and microaggressions are rampant in lunch rooms, schoolyards, and other unsupervised social and digital spaces where youth spend time: Although students of all races experience these aggressions, youth of color experience them more often, leading to what has been called “discriminatory distress” which, when chronic, has cumulative negative effects well into adulthood.  Instead of passively allowing young people to overlook or ignore these racial dynamics, we need to empower them to implement change. Moreover, when White parents continue to communicate to their children that race is unimportant, the burden of racial progress and change falls squarely on the shoulders of children of color, entitling White children to rarely or wrongly think about race. All parents, not just parents of color, need to actively help our children understand, interpret, and resist the structural racism and implicit biases they see in order to help prepare them as future leaders who recognize and fight against their own implicit racism and the racism of others.

How and how much, then, should parents discuss current racial events with their children? As much as possible, in ways that are aligned with children’s ages and readiness to learn. Importantly, though, parents need to have a plan about what they want to convey and how. For young children, discussion of highly visible racialized violence should be simple and brief. Although parents should certainly shield children from graphic video footage, they should prepare themselves to answer children’s questions about things they might see in newspapers or on TV (e.g., why are police officers pushing people? Why are stores and cars burning?). Answers should be simple and brief, and they should reflect parents’ equity and justice goals.

In our work, many parents have described situations in which young children’s questions caught them off-guard, leaving them at a loss for what to say or how to explain. Of course, older children are in a better position to digest more complicated information about inequality and structural racism, and we advocate that parents have frank and accurate discussions about current racialized events (especially their history and origins). Parents’ silence about racialized horrors that children see on TV and social media is in itself a communication to children that racism and inequality are an acceptable way of American life. It is important for all of us (teachers, parents, youth advocates, and researchers) to recognize that children are drawing inferences about the meaning of these events even if parents are not talking about them.

How can parents teach this generation in ways that help dismantle, rather than perpetuate, the systemic racial injustices and inequalities upon which America has been built? Our IPEJ principles apply most directly here. Parents first need to closely examine their own racial beliefs and attitudes to position themselves to teach what they value most to their children. If possible, they should expose children early to diversity in meaningful ways (the places and events they attend; the friends they have; the toys, books, symbols, and wall hanging in the home). In age-appropriate ways, find opportunities to talk about, rather than overlook, how racism and oppression has been deeply woven into the fabric of American life, both historically and to this day. Deliberately discuss, rather than avoid, how non-dominant groups are negatively stereotyped and harmed by slurs, stereotypes, and other stigmatizing public actions and portrayals of minority groups, both historically and now. When and where they see them, parents can identify instances of privilege and opportunity that result in people of color having less access. Find ways to expose children to the strengths, rich traditions, and positive contributions to all aspects of our society of diverse cultural and ethnic groups. In general, intentionally integrate teaching about race into your overall parenting agenda.

Racial injustice is a problem for all of us. Just as it required collective responsibility to flatten the COVID-19 curve, addressing racial oppression, injustice, and inequality is all of our collective responsibility. Intentional Parenting for Equity and Justice is a tool to end systemic and interpersonal racism by raising all children’s consciousness about the impact these systemic factors have on individuals’ health and wellbeing. Without this sort of approach, we, as social scientists, fear that traumatic and painful racial incidents will remain as entrenched as ever in the fabric of American life. Parents need to be part of the solution, recognizing that silence and inaction sustain systems of racial injustice.