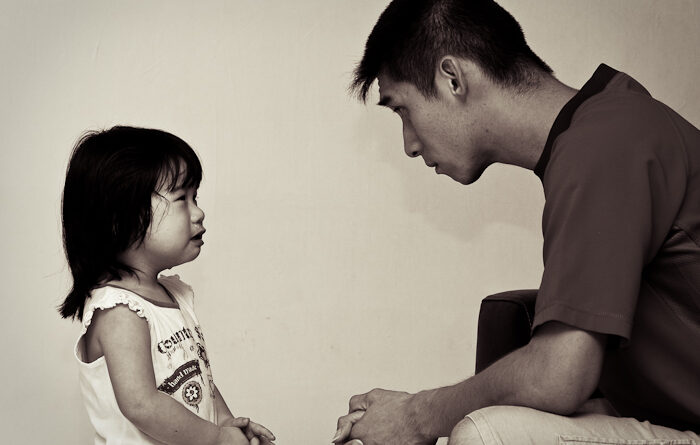 Near-scientific consensus that physical punishment is damaging to children has led to interest in how to educate parents about its potential harms. Efforts to reduce parents’ use of physical punishment, often called spanking, with young children through on-line education are likely to succeed only if they directly address parents’ beliefs.

This is what we learned from an experiment we undertook to examine how parents who approve of physical punishment remain committed to spanking even after being shown scientific evidence linking the practice to many negative outcomes for children, including aggression and mental health issues. The study, of parents of 2- to 8-year-olds from 41 U.S. states, was published in the Journal of Family Psychology.

In our study, parents were given written scientific evidence about spanking in the form of an on-line news article, which included quotes from an expert on physical punishment. They also received written opinions from lay commentators who advocated for physical punishment. Parents who approved of physical punishment rated experts as less trustworthy than lay commentators, thereby avoiding the psychological challenge and discomfort – often called cognitive dissonance — that occurs when beliefs contradict scientific evidence. They may do this by questioning the trustworthiness of the science and preferring alternative perspectives that fit their views.

“Parents do not discount all science related to parenting, just science that conflicts the views they hold.”

However, in our study, parents who approved of physical punishment were not anti-science in principle. Their distrust of science was specific to this topic. For example, parents had no trouble valuing messages from experts on a neutral topic — the importance of car seats for children — even when they had discounted the expert on physical punishment. These findings suggest that parents do not discount all science related to parenting, just science that conflicts the views they hold.

The Internet has become a leading source of information for parents around the world. Our study helps us understand why efforts to significantly reduce spanking by disseminating information on-line about the dangers of physically punishing children may prove difficult without directly addressing common misperceptions about physical punishment. First, the on-line world makes it very easy for users to avoid information that contradicts what they already believe. Second, it gives users competing lay and pseudo-scientific commentary that can confirm existing views in what are often referred to as echo chambers.

The good news is that parents who approve of physical punishment don’t distrust science per se — they are generally open to scientific findings, as the comparison involving child car seats showed. However, it is easy for parents to discount scientific findings when they can easily find others on-line who validate their support for practices such as physical punishment.

Paediatricians can be influential

Given the challenges of on-line parent education, a more productive way to educate parents about the harms of physical punishment may be to do so through experts they already trust, such as their children’s pediatricians. Pediatricians are widely trusted by parents. In the United States and Canada, they are encouraged to offer anticipatory guidance – a type of proactive counselling on childrearing topics such as children wearing bicycle helmets and ensuring that guns are stored safely — even if parents don’t raise the issue. The risks of physical punishment should be a subject that is frequently discussed with parents, along with suggestions for disciplinary methods to use instead of physical punishment. Pediatricians say the best time to discuss this is when children are infants so parents can reflect on the options available long before their children misbehave. However, pediatricians are not always trained for the task and may need advice on how best to raise these issues and participate in these discussions.

At some level, most parents who physically punish their young children believe in the practice. Some use this kind of punishment because their parents used it on them and they believe it worked. Some see it is as a last resort, when parents feel they have no other option. They may feel they need spanking in their toolbox to drive their message home on occasion. Simply telling parents not to hit their children without providing a realistic and credible toolbox of alternatives is unlikely to win over converts. Experts may seem to be taking away parents’ last resort without offering them something they know will work in what can be a stressful situation. Also, if experts offer parents alternatives that seem too difficult or time consuming, parents may display solution aversion: When a solution is regarded as unworkable or too scary, people recoil from it and stick with what they know.

Tempting though it may be to simply rely on making scientific evidence about physical punishment widely available, to have a wider impact, we need more individualized approaches that address parents’ beliefs. Resistant parents are not intrinsically anti-science. But on the issue of spanking, they need workable options other than physical punishment. When the going gets tough, they need something they can really believe in.